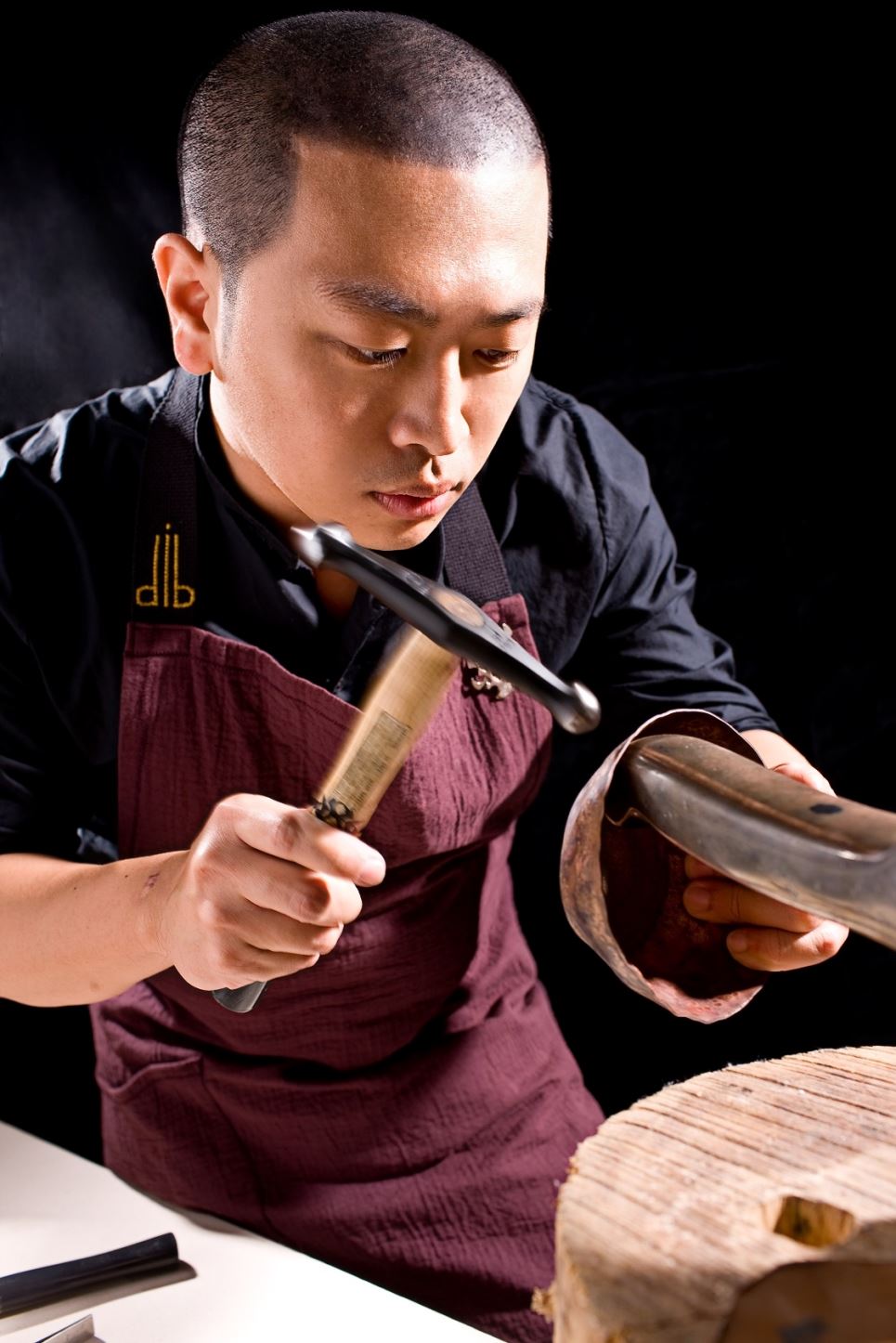 ‧ Chinese Name: 楊炘彪
‧ Year of Birth: 1976
‧ Place of Birth: Tainan, Taiwan
‧ Did You Know?
Quintus Yang Xin Biao showed an interest in and talent for craftwork from an early age. Since he was 14, he has been studying metalsmithing and jewelry design, and this deep background couples with his refined techniques and delicate expressions of emotion to create exquisite works that showcase his belief that metalsmithing and lacquer art are as much arts as they are handicrafts. Yang is best known for his double-layer insulated silver teacup piece "Full Moon" from 2007, for which he won the National Craft Award and became the youngest National Master Craftsman in Taiwan’s history at the age of 31.

Yang grew up around the arts of tea-making and metalsmithing. His father came from a family dedicated to the cultivation of high-mountain tea, and his mother’s family invested in the jewelry business. While he was born in Tainan, his family soon moved to Kaohsiung’s Xinle Street, a street renowned in the gold and silver jewelry industry, and this background influenced his future development direction as a craftsman and artist.

At the age of 14, Yang started working as an apprentice smith in his family's jewelry shop under a master from Hong Kong right as Taiwan's economy was taking off, and the future of the industry was looking promising. He finished his training after three and a half years but didn’t want to settle for just making jewelry, so he began to think about how to give more life to his metalwork.

In 1996, Yang enrolled in the Department of Art and Design of Dayeh University. In addition to metalwork, he studied with Gu Qijun, who graduated from the Graduate School of Arts and Crafts of Kanazawa University in Japan, getting his first exposure to natural lacquer work and trying to create works that combined this with metalwork.

In 2003, he began graduate school at Tainan University of the Arts, during which time he investigated the creation of natural lacquer works combined with silver and gold. In the following year, he went to the National Taiwan Craft Research and Development Institute in Caotun, Nantou, to study bodiless lacquerware.

Quintus Yang has received a number of awards since being selected for the first time for the Taiwan Craft Design Competition with his works "Holy Beetle (聖甲蟲)" and "Exciting Energy (激能)" in 2000. From that year through 2007, Yang's works were consistent winners of that competition. Then, in 2007, the peak of Yang's career, he created the double-layer insulated silver teacup "Full Moon (月輪)," a piece inspired by his family's tea and jewelry businesses, which won the first prize in the National Craft Awards (now the Taiwan Craft Competition), becoming the youngest National Master Craftsman in the history of the competition. The two years following, 2009 and 2010, he received the C-Mark certification and won five awards of excellence, as well as the Best Shape of the Year and Most Fashionable Awards.

Yang is not only highly skilled in his craft, he also spares no effort to pass on his skills and knowledge. After finishing graduate school in 2005, he began working as a full-time university lecturer. In 2008, he founded the first jewelry department in Taiwan at Meiho University; in 2010, he joined Tung Fang Design Institute as a full-time assistant professor and was promoted to associate professor in 2014, continuing to promote university education in metalwork aesthetics.

In addition to working in formal education, Yang has been in residence at the National Taiwan Craft Research and Development Institute Culture Park’s Metal Workshop since 2011, promoting metalwork and building enthusiasm about learning it among the public, helping keep this piece of Taiwan’s cultural heritage alive while also promoting innovative thinking and the use of environmentally friendly natural materials, going beyond traditional thinking about crafts to show the exquisite side of contemporary metal art. In recent years, he has also served as a jury member for major craft competitions such as the Hsinchu Zhuqian Award, Taichung's Dadun Craftsman Award, the Tainan Nanying Awards, and the Taiwan Craft Competition.

The metalworking industry was once considered outside the mainstream, but through a journey of many ups and downs and many experiments, the social and cultural perspectives on the art have undergone a long and gradual evolution. Quintus Yang believes that craftsmanship is a form of artistic action grounded in everyday life. Through limitless imagination coupled with molding, pushing, forging, stacking, and fusing of materials, he is able to present both a sense of daily life and a concern for the universe, time and space, and the natural environment. He has helped show society that working with precious metals can be about more than their monetary value, and he plans to tour an international metalwork exhibition to promote the fashionable arts of Taiwanese metal and lacquer work to the world.