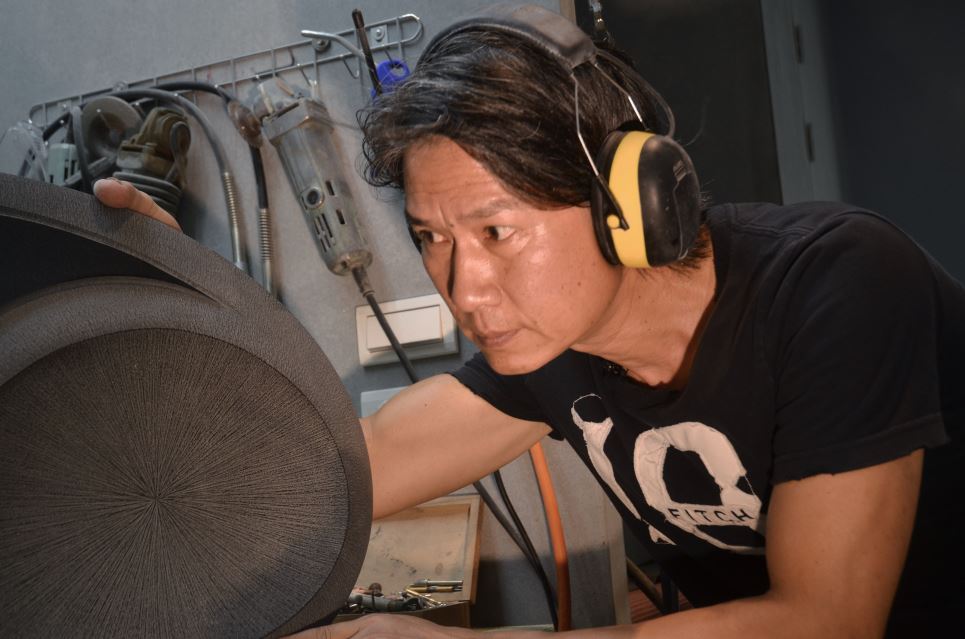 ‧ Chinese Name: 鄭階和
‧ Year of Birth: 1968
‧ Birthplace: Penghu, Taiwan
‧ Did You Know?
Cheng Chieh-ho, who rose to prominence in the art world with his carved stone tea plates, received no formal education in the art. However, thanks to his innate artistic talent and love for stone carving, he has won many awards in major domestic competitions with works characterized by simplicity. He considers stones to be a living thing, so he works on each piece independently and insists on not putting wax or lacquer on his works. Specializing in tea sets, he creates practical and aesthetically pleasing works, realizing his ideas of bringing art into everyday life.

As a child, Cheng Chieh-ho grew up in Penghu learning the skills needed to be a fisherman. This, though, was not something that held any genuine interest for him. When he wasn’t out at sea, he would spend most of his time chatting over tea, dreaming of one day making a living on Taiwan proper. After graduating from junior high school, he moved to Kaohsiung to complete his high school degree part-time while also learning the art of pottery making in Taichung. After completing his compulsory national military service, he worked with some friends, ran a tea house, often looking around in search of good quality tea sets. From this, he got the idea of making his own tea sets, opening a pottery workshop in Caotun, Nantou. With a natural eye for lines, forms, and colors, he was confident that he would be able to produce distinctive pieces, and the reception they received confirmed this.

In addition to pottery creation, Cheng Chieh-ho is also interested in collecting and studying fine stones, particularly appreciating the unusual stones he has collected from streams, riverbeds, and elsewhere in nature. In 1999, he took part in a five-week course on stone-working techniques at the National Taiwan Craft Research Institute, finishing top of the class. The Jiji Earthquake that struck in September that same year destroyed years worth of pottery, inspiring him to try to create sturdy, indestructible works, which led him to the world of stone carving and ultimately to setting up a stone carving studio in 2009.

All of Cheng’s works are hand-carved. The most difficult things to deal with, he says, are the linear design (i.e., linework) and the overall feel of the work. In making them, his approach can often change due to evolutions in technique and ideas, so he feels he must do it himself rather than let anyone else do it for him, which gives his works a unique charm.

Cheng’s stone sculptures are characterized by smooth, rippling lines, sometimes as delicate as water, sometimes as rough as basalt - a merger of hard reality and soft fantasy. They are simple and smooth, quiet and elegant, his transformation of hard stones into soft poses, and even polishing it into virtually wood-like textures, make them worthy of being called masterpieces.

In his series "Taiji," Cheng took the familiar titular yin-yang symbol and carved it into various tea plates, providing people with a chance to take tea with a combination of Confucian and Taoist ideas. The minimalistic "Geometry" series expresses the Zen state through wood textures on bicolored stone or stones marked with tortoise-shell cracks revealing the texture beneath, creating works like "One Body, Two Faces" which combine practicality and artistry in a refreshing subversion of traditional ways of thinking about art.

As a tea lover, Cheng Chieh-ho has made tea sets the primary focus of his art, and to find the types of stone that work best for his art he experimented with a variety of them, letting the tea moisten the stone and watching how it changed. Finally he found that the basalt of his home in Penghu and the unique bicolored stone of Wufeng and Puli would bring out the best simple lines and shapes while also changing texture and color appropriately through usage by people.

At the same time, he has continued to experiment with various media. For example, in his work "Sensing Tea," he added shiny tin to give the work the tactile smoothness of Duan ink-stone and a feeling of the rhythm of water drops. In his well-known series of works, "Calligraphic Feelings," Cheng incorporated the cursive style of calligrapher Huai Su into his works, opening a window onto a wild artistic realm.

Cheng is active in both domestic and international art circles. In addition to numerous solo exhibitions in Taiwan, he has also participated in group exhibitions abroad, including in New York and Paris, and has published two books on stone sculpture. In addition, he has won numerous awards, including the National Craft Award in 2003; in 2004, first prize in the Taiwan Craft Design Competition, the Audience Prize in the National Craft Award, and first place in the Craft Category in the Taichung County Art Exhibition; being honored in the inaugural Dadun Craftsman awards and with a distinction in the Craft Category in the 59th Provincial Art Exhibition in 2005; another distinction in the Craft Category in the 18th Nanying Art Exhibition in 2006; and being honored in 2007 at the Council of Cultural Affairs’ Taiwan Crafts Workshop.

With his rigorous attitude, Cheng Chieh-ho combines the art of stone carving with tea ceremony culture to create works that are both aesthetic and practical. He believes that only creations that are truly part of everyday life have real vitality, and he also hopes that such works of his might become heirlooms that collectors can pass down from generation to generation.