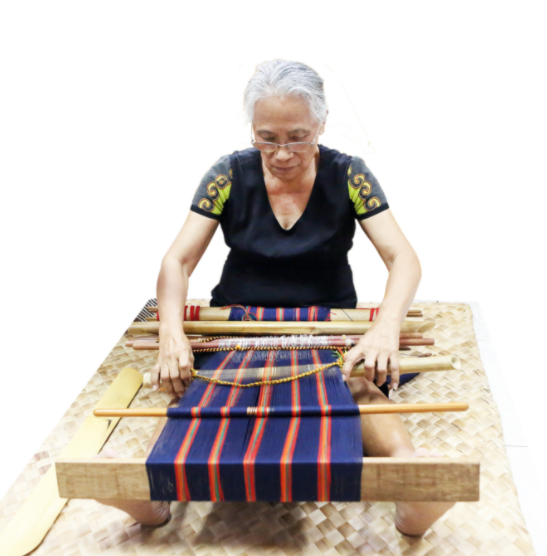 Chinese Name: 許春美
Date of Birth: April 1, 1948
Place of Birth: Pingtung County, Taiwan
Did You Know?
Tjemenun weaving is part of the traditional memory of the Indigenous Paiwan people. Ljumiang Pacekelj is a master Paiwan weaver from Pingtung County who has devoted much of her life to the study of her people’s traditional loom weaving technique, which has been in danger of being lost. Her efforts were inspired by her father’s admonition that cultural heritage should never be broken, and to that end, she has even assembled her knowledge of this part of her culture into book form, as well as working personally to revitalize the craft across cultural and ethnic lines. For these many years of hard work and commitment, she was recognized in 2021 by the Ministry of Culture as National Traditional Craftsperson, making her the first member of the Paiwan people to become an official National Living Treasure.

Ljumiang Pacekelj was not exposed to traditional weaving when she was a child, as was the old tradition. Instead, she relied on her father, who in turn had learned from his mother and grandmother how to weave as a child. He would explain the various weaving techniques to her, the two of them gradually reclaiming the traditional culture that Paiwan women have historically been so proud of. "Weaving patterns are the writing of the Paiwan," says Ljumiang Pacekelj. Each pattern has its own name and conveys a different cultural meaning and story, as well as life lessons that should be followed. The craft is rich in cultural lessons and Paiwan norms—for example, the tooth pattern symbolizes a woman’s responsibility to protect the health of her family.

When she first started learning traditional weaving, Ljumiang Pacekelj found qaqeljesayan, pattern layout, to be the most difficult step. Before starting, the pattern must be carefully conceived; when weaving, it requires full physical and mental commitment to avoid confusing the order of the warp and messing up the entire pattern. To help, her father dictated a set of ancient recitations for weaving—sa senayan—drawn from his memories and which had been compiled by Paiwan women over the ages for weavers just beginning to learn the craft. In addition, under the guidance of her father, Ljumiang Pacekelj learned the basic techniques from the tribe’s last remaining weaver, Tjinuay.

Today, Ljumiang Pacekelj is well versed in the complete process of traditional Paiwan weaving, as well as the main techniques of plain weaving, twill weaving, floating weaving, tied weaving (commonly known as pick weaving), jacquard, and flower-pick weaving, and is familiar with the environmental and societal connotations reflected in each pattern. In addition, she says that her Catholic faith has helped her break through many obstacles and provided her with ideas and inspiration in the process of weaving.

Ljumiang Pacekelj is committed to promoting the revival of traditional Paiwan weaving techniques. In addition to teaching at the “tribal university,” she has also opened a workshop in the community of Kuljaljau in Laiyi Township. Considering that the raw materials for traditional weaving are not easily available, she has led the women of her community to grow ramie and make thread from it by pulling the silk from the cocoons, using that to make traditional clothing. In addition, Ljumiang Pacekelj has a Class A women’s clothing license and has tried to innovate by incorporating tjemenun weaving into modern clothing design. This, she says, is to capture the attention of the younger generations, thus further helping the culture live on.

Paiwan weaving tradition suffered a disruption under the Japanese colonial government of the early 20th century, and so to preserve their people’s unique weaving culture, Ljumiang Pacekelj and her friends have visited Indigenous communities to find the last living traditional weavers, hoping to record more techniques and weaving patterns direct from them. Through the publication of the book, "Tjinnun Nuwapaiwan—The Weaving of the Paiwan," Ljumiang Pacekelj has translated some 40 weaving techniques and their associated cultural content into pictures and step-by-step records, providing another avenue to continue passing on the techniques and wisdom of her ancestors.

Ljumiang Pacekelj was honored in the inaugural National Taiwan Craft Achievement Award and has been granted a Traditional Crafts Master license by the Pingtung County Government, and in September 2021, she was recognized by the Ministry of Culture as the first National Living Treasure from the Paiwan people as a preserver of the "Important Traditional Craft of Paiwan Tjemenun Traditional Weaving." It has been a long and slow road to such national recognition. Facing the impact of modernization, it has not been an easy task for Ljumiang Pacekelj as she persists in promoting the traditional weaving of the Paiwan, hoping that its culturally rich patterns will continue to flourish into the future.