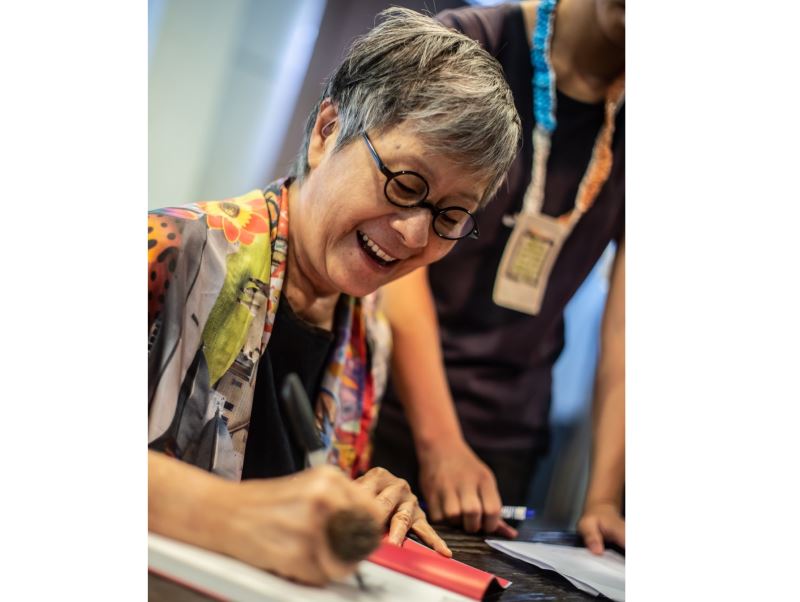 Chinese Name: 蕭麗虹
Year of Birth: 1946
Date of Death: August 30, 2021
Place of Birth: Hong Kong
Did You Know?
An artist, curator, and collector who originally hailed from British Hong Kong, Margaret Shiu was also the founder of the first artist-in-residence organization in Taiwan, Bamboo Curtain Studio. With a strong passion for art from an early age, after settling in Taiwan, she soon became an indispensable and important promoter of Taiwan’s art and culture scene. For many years, she provided valuable support to young and rising artists, focused on social and environmental sustainability issues, and promoted international cultural exchanges, as well as actively participated in public affairs around the cultural policy. In 2021, her efforts were recognized at the 25th Taipei Culture Award.

Born in British Hong Kong, Margaret Shiu underwent a Western education as a child. She attended college at the University of California, Berkeley, majoring in Social and Economic Development. Despite having been told she had no artistic talent, she chose to take Western Art History and Architectural History as a minor so as to pursue her interest. After graduation, she took up a position as an assistant professor at the Massachusetts Institute of Technology. After work, she studied pottery, metalware, and other arts and crafts production, with a particular interest in silverware. She experimented with the possibilities of ceramics in a course on multimedia art at MIT, producing her first ceramic work, “Hippo Paperweight.” It was during this period that she set down the foundation upon which her subsequent artistic and creative activities would build.

In 1976, she and her husband settled in Taiwan. In the 1980s, she started making practical pottery objects. In addition to these utilitarian vessels, her early works also included those rich in meaning and expression as she pursued conceptual modeling art. In addition, in 1983, she also produced her first human-focused piece, and later created the “Human” series. Due to her personality and life experiences, her works combine elements of both the Eastern and Western worlds, with both conceptual and narrative qualities. Among them, the “Cloud” series is her most widely known and iconic minimalist work, as well as being autobiographical, and is considered pioneering in the avant-garde spirit and style of Taiwanese ceramics. She then gradually moved into the field of visual art, with a particular focus on installation art. In 1989, she was awarded the first prize in Modern Sculpture from the Taipei Fine Arts Museum, followed in 1992 by the Collection Prize in the Taipei Biennial of Contemporary Art, also organized by TFAM.

In addition to artistic creation, facing the constraints and expectations of the development of Taiwan’s art world, Shiu took a proactive role in advocating for international cultural exchanges, paying special attention to the reuse of idle spaces. In 1995, she founded the first for-profit international art village in Taiwan, Bamboo Curtain Studio, on the bank of the Tamsui River, dedicated to the long-term planning of alternative spaces and a pioneer of art villages in Taiwan. Bamboo Curtain Studio provides exhibition and working spaces to foster the development of avant-garde works by a variety of artists, as well as promoting exchanges through the artist residencies. In the early days before the government had developed a comprehensive cultural policy, Shiu also advocated for artist residencies and the reuse of unused space, co-founding the Visual Arts Alliance, the Association of Culture Environment Reform, and the Taiwan Women’s Art Association together with several other artists. Coming together, they were able to harness the collective strength of the arts community, communicate and coordinate with government departments over a long period, and actively advocate for the sustainable operation of the Huashan Arts and Culture Special Zone.

During the same period, Shiu and Bamboo Curtain Studio collaborated with many art research and exchange organizations and promoted research into cultural and creative spaces through their rich international network and institutional cooperation mechanisms. She was also active in promoting social action and studio exchanges with artists, and was concerned with issues such as social and ecological sustainability. In 2009, she co-founded the Shumeikeng Creek Environmental Art Initiative with artist Mali Wu, for which she was honored with the 11th Taishin Art Award in 2013.

In recognition of TFAM’s early encouragement and support of her experimental exhibitions, in June 2020, Margaret Shiu offered to donate 43 works from 26 artists across a range of media, including ink, calligraphy, oil painting, printmaking, photography, video, and installations, to the museum’s collection to enrich its research. In 2021, she received the 25th Taipei Culture Award for her contribution to the promotion of international exchange in the arts. On August 30 of the same year, Margaret Shiu passed away in Singapore at the age of 75.