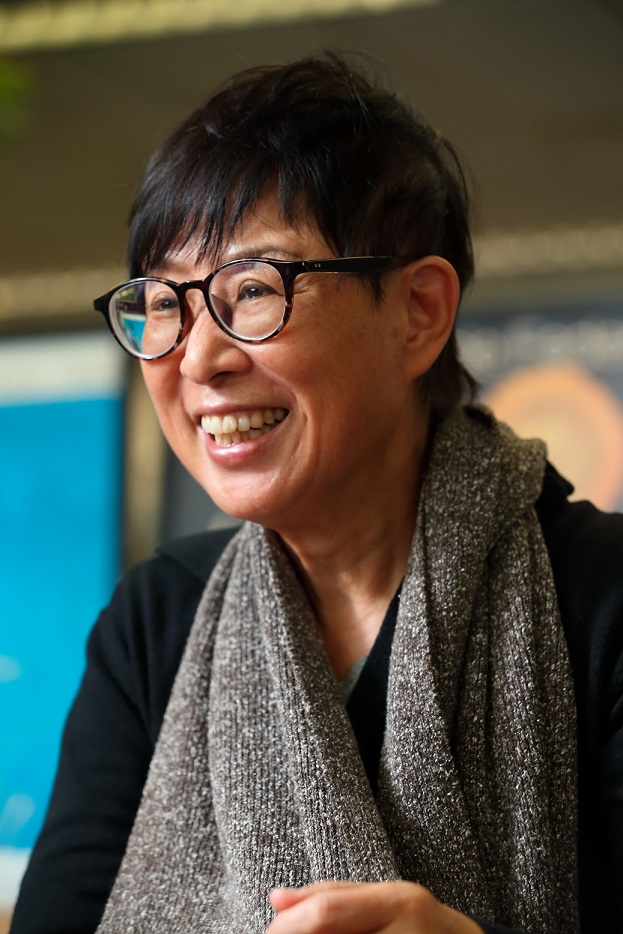 Chinese Name：郭中端
Year of Birth: 1949
Birthplace: Taipei City, Taiwan
Did You Know?
Landscape architect Kuo Chung-dwan has earned a reputation as a pioneer in Taiwan's landscape architecture community and a warrior for combining landscape aesthetics with ethical land use. Over her years in the industry, she has created innumerable works with a professional conscience focused on protecting land and water alike, driving a new wave of river revitalization and water-friendly aesthetics in Taiwan. She puts her respect for land and environment first in her design work, and her aesthetic is one characterized by an adventurous and varied sense that is flavored with cooperation across disciplines to create a new cross-generational, cross-disciplinary model for contemporary Taiwanese landscape architecture.

After graduating from Tamkang University in Tamshui with an undergraduate degree in architecture, Kuo Chung-dwan packed up and traveled to Japan to pursue studies toward a Master's degree in engineering at Nihon University, following this with a doctorate in architecture and urban engineering at Waseda University. During the latter of these, Kuo studied under renowned Japanese architect Takamasa Yoshizaka. In 1987, Kuo, who worked for AtelierZo in Japan, undertook the planning of the Dongshan River Water Park in Yilan, ushering in a new style of landscape architecture in Taiwan.

In 1992, she co-founded the Laboratory for Environment & Form (LEF) with her partner in both life and work, Kenji Horigome, pursuing their shared concept of "near-natural workmanship" in landscape design. Their works displayed their distinctively Taiwanese-Japanese mixed heritage, not only showcasing their dedication to excellence and heritage, but also their commitment to humility, finding the divine in everything, and actively promoting the combination of aesthetics and morality.

Kuo, who has a particular skill for linguistic insight, explains that the concept of "landscaping" is about the manipulation of the condition of spaces through human management. As for "ecology," the "eco" prefix calls to mind both ecology itself and economics. In other words, landscape planning focuses on how to balance the ecology of the environment with the livelihoods and amenities of its users. "Man does half, God does half," is Kuo Chung-dwan's design philosophy. She has said that to pursue a public landscape project, one must face both the government and society at large, and if one does not have a deep connection to the land, one simply cannot cultivate it for the long term.

Water systems are particularly important to Kuo, and among her guiding ideas is one of following the original ecology of the site, highlighting its history and culture, applying local techniques, and striving to avoid building additional structures. In order to make a comfortable landscape in Taiwan, Kuo says, the key points are the adjectives "ancient" and "clean." "Ancient" here refers to keeping in mind the good architecture of the past when building, preserving it with a focus on restoration and with the aim of passing it on to future generations. "Clean," meanwhile, applies to both water and greenery, incorporating both into landscape designs, to provide a stress-relieving environment for modern people who live busy and stressful lives.

"Water" is also a crucial element in the landscape design of Kuo's work, believing that the ecological aspects of the environment, and water as an indicator of life, in particular, must be taken into account. She points out that humanity needs to be more considerate of other living beings, as without them, ultimately humanity will also find itself unsustainable. In fact, by working toward more harmonious coexistence with other creatures, humanity will find its life further enriched.

In 2021, Kuo Chung-dwan received the 22nd National Awards for Arts, the first landscape architect to be honored with the award. At the age of 72, she feels that she has only just begun to open her eyes to the possibilities and that it was still too early for her to win the award, saying modestly that her best work was yet to come. She feels that her winning the award is not about the rise of landscape design, but rather an indicator that the public is finally coming to understand the meaning of landscape design.