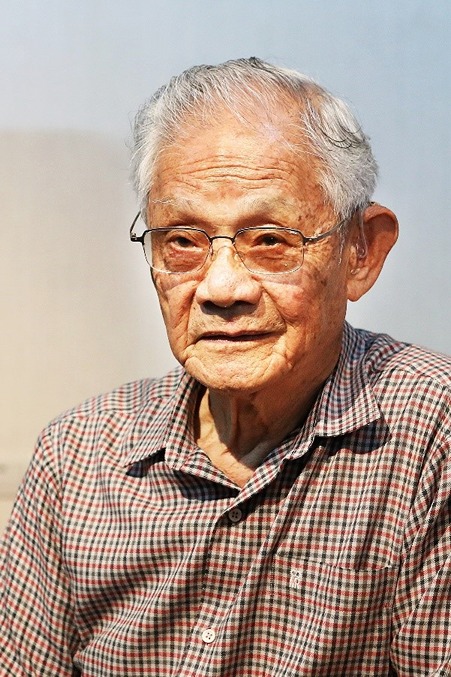 Chinese Name: 游禮海
Year of Birth: 1933
Place of Birth: Daxi Township, Taiwan, Taoyuan
Did You Know?
Yiu Li-hai is an inheritor of the Daxi area tradition of joinery and has not only borne witness to the evolution of Daxi woodworking into a combination of Japanese, Chinese, and Western styles, but has also been a pioneer himself in taking that development further. In 2021, the Ministry of Culture recognized Yiu as a preserver of the important traditional craft of joinery.

Yiu Li-hai was born in 1933 in what is now Touliao in Taoyuan's Daxi Township. After losing his father at a young age and seeing his family struggle financially, at the age of 15, Yiu set out to become an apprentice craftsman. The following year, he commenced an internship under Huang Quan (黃全), under whose guidance he spent a grueling 32 months (compared to the usual 40), quickly becoming his master's favorite student and soon moving on to becoming a full craftsman. At 19, he traveled to Taipei, taking up work with the various wooden furniture shops in the city by himself, coming into contact for the first time with Western-style furniture. Six years later, at 25, he returned to Daxi to work at the request of Huang Quan, bringing with him the latest trends and elements from Taipei. He also married Huang's daughter. At the age of 30, he started his own business, Jimei Woodware, starting out making neo-classical style Western furniture. Later, he developed his own style bringing together Chinese and Western styles, receiving rave reviews. In the 1980s, Yiu Li-hai began taking up invitations from temples to make their offering tables, including doing work for Zhongli's Yuanhua Yuan (元化院), Dajia Jenn Lann Temple, Banqiao's Bodhi Temple and Hongfa Zen Monastery, and even Chuang Yen Monastery in New York, USA.

Since retiring at the age of 65, he travels the world and has devoted himself to photography, as well as working on a series of wood carvings entitled "Landscape," which showcases rich creative energy that has its roots in tradition while at the same time breaking the mold. In 2009, he created his first piece in the series, "Beginner's Mind(初心)," made with Taiwanese cypress. Replicating traditional ink wash painting with a blade rather than a brush, Yiu chiseled a traditional landscape, shrinking majestic mountains into microcosms in a display of his formidable skill with blade and chisel.

Yiu Li-hai's woodcarving works completely preserve and present the essence of Daxi’s traditional wooden furniture, with elegant shapes, perfect proportions, and meticulous carving. Yiu not only witnessed the evolution of Daxi woodware into a mix of Chinese, Japanese, and Western styles, but also took the combination of Chinese and Western styles further himself. He was a leader in the development of Daxi wooden furniture through the 1970s and 1980s, marking the most glorious period in the history of the development of that industry. After a long period of development, Daxi wood furniture has come to combine features of a variety of crafts, including woodworking, carving, ink wash, painting, inlays, and lacquer. Yiu's work is particularly known for its use of exquisite materials, precise joints, meticulous carving, and exquisite lacquer art, a worthy heir to the tradition of fine wood craftsmanship of Fujian and Guangdong.

In addition, Yiu Li-hai has long promoted the concepts of "artistic family worship halls" and "bringing art into furniture and life into art." As such, he has been a leader in elevating the aesthetic of Taiwanese living spaces and home decoration through Daxi mahogany furniture. In particular, his creative concept of "landscapes that depict the spirit and art that carries the thoughts" is infused in all of Yiu's works. Incorporating ancient classics, they seek to remind future generations that the way to learn is to set an aspiration, seek the right path in life, stay true to oneself and one's morals, and never violate professional ethics. These works not only show the artist's mission of artistic communication, but also open up interpretations of the artist's own journey through the world of art.

In 1990, Yiu Li-hai was awarded the National Heritage Award by the Ministry of Education in the Traditional Handicrafts category; he received the Council for Cultural Affairs' Folk Crafts Award every year from 1992 to 1994; in 2012, he was recognized as a cultural asset by the Taoyuan County Government for his preservation of Daxi’s traditional woodworking; and in 2021, the Ministry of Culture recognized him as a preserver of the important traditional craft of joinery.

Works related to Yiu Li-hai include "Abode of a Roaming Heart | Retrospective Exhibition of Master Artisan Yiu Li-Hai at the Age of 86 (游心所寓｜藝師游禮海 86 回顧展)" (2019); "Art Highlights in Taoyuan: The Treasured Wood Art of Daxi—Yiu Li-hai (桃園藝術亮點：木藝頂真執著的大溪瑰寶 : 游禮海)" (2015); "Wood Artist Yiu Lihai: Carving Wisdom for Life (木藝師游禮海：雕琢生命智慧的工藝瑰寶)" (2017); "Retrospective: Selected Works of Yiu Li-hai (木藝師游禮海：雕琢生命智慧的工藝瑰寶)" (2002); "One Heart and One Art 7: The Skill and Beauty of the Master (一心一藝7：巨匠的技與美)" published by the Bureau of Cultural Heritage, Ministry of Culture (2017); and "The Capital of Woodcraft: The Woodcrafting Family of Daxi (木藝之都：大溪的木藝家族)" (2018).