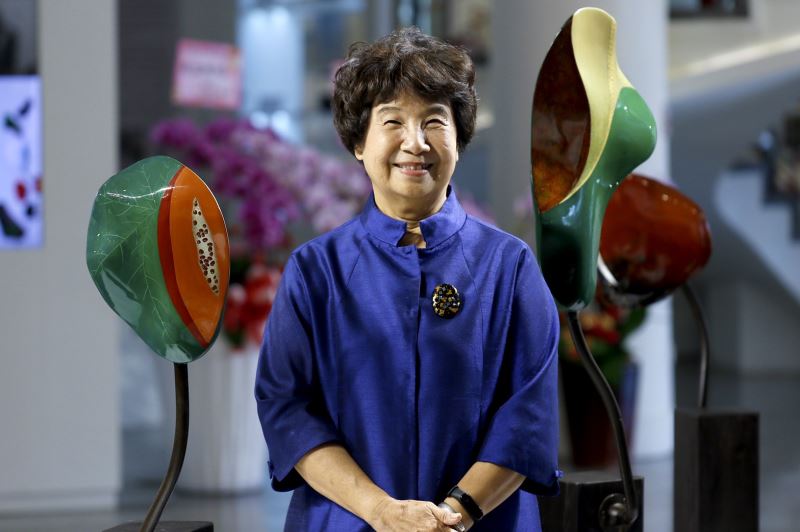 Chinese Name: 黃麗淑
Date of Birth: 1949
Place of Birth: Ligang Township, Pingtung County, Taiwan
Did You Know?
Artist Huang Li-shu has dedicated many years to the study of traditional lacquer art, developing skills in more than ten different painting techniques. Through this diverse background, she is able to deftly combine a variety of media and use different materials for ceramic bodies, finishing all of her works in a diverse and innovative array of styles. She has won more than a dozen awards at home and abroad and is actively engaged in the academic study of lacquer art, publishing more than 30 pieces of research and researching, preserving, and educating about Taiwanese lacquer art. Overall, she has contributed a great deal to the development of the art form in Taiwan. In 2021, the Ministry of Culture recognized her as a preserver of the important traditional craft of lacquer art.

Huang Lishu graduated from the National Taiwan Academy of Arts (now the National Taiwan University of Arts) and then went on to dedicate herself to art and craft education at high school level. Later, she joined the design team of the Taiwan Provincial Institute of Handicrafts (now the National Taiwan Craft Research and Development Institute), working on product design & development and coordinating with manufacturers. In 1984, she began studying lacquer art with Chen Huo-ching (陳火慶), inviting him to teach at the Institute of Handicrafts. She planned an apprenticeship program for Chen, wrote his biography, and organized special art exhibitions, leaving lasting marks on the history of Taiwanese lacquer art and setting out the historical trajectory of its development.

Driven by her love for artistic creation and her a sense of duty toward the development of her craft, Huang went to the Tokyo National Research Institute for Cultural Properties to learn the maki-e technique, the Ryukyu Craft Guidance Institute to learn the unique Okinawan craft of tsuikin, and to Fujian, China, to learn traditional Chinese lacquer techniques, including learning lacquer lining and gold foil inlay from traditional artisans. She has also engaged in in-depth research into the lacquerware of the Japanese-era Taiwan Governor-General's Office. All of these experiences have helped her lay a robust cultural and artistic foundation.

After leaving her work in the public sector in 1999, she devoted herself to the teaching, research, and creation of lacquer art as a folk artist. She took on adjunct professor positions at the Graduate Institute of Conservation of Cultural Relics and Museology at the Tainan National University of the Arts and the Yun Tech & Technology Department of Cultural Heritage Conservation, teaching lacquer art. She has also ventured into the community to promote arts and crafts, setting up "Lackunst (游漆園)" in Caotun, Nantou, to serve as a cultural exchange platform for lacquer art lessons, exhibitions, and more, sharing and passing on her superb lacquer craftsmanship.

Huang often makes her patterns stand out with a technique of "stacking" thin materials like metal foil and powder in the lacquer and using layers of natural lacquer to protect the ornamentation from coming off. A result of this process is that her colors are of darker tones, giving a calming feeling, while the surface is both clear and lustrous. In addition, she makes use of a variety of lacquer techniques such as mother-of-pearl inlays and eggshell stickers to build up a beautiful interplay of light and shadow. Huang believes that a piece must have its surface protected with lacquer before it can be considered complete. Even if the lacquer makes the color seem duller, it is nevertheless more important that the surface be safeguarded. As a result, viewing her works can give a sense of “implied color” and calm tones, and this has become her artistic calling card.

Major publications by Huang Li-shu include "Cultural and Creative Industries Developed from Tradition 3—Huang Li-shu and Taiwanese Lacquer Art (從傳統出發的文化創意產業叢書3-黃麗淑與臺灣漆藝)” (2003), "Investigation and Research into the Preservation and Maintenance of Lacquerware Relics: The Everyday Lacquerware of the Governor's Mansion in the Japanese Era (漆器文物保存修護調查研究:以國史館臺灣文獻館典藏日治時期總督府日用漆器為例)" (2006), "An Analysis of the Development and Forms of Taiwanese Penglai Lacquer Art (臺灣蓬萊塗漆藝發展與工法形制分析研究)" (2009). In addition, the Nantou County Government Cultural Affairs Bureau has published "Walking in the World of Lacquer: Huang Li-shu's Endless Collection of Lacquer Art (游漆天地：黃麗淑的漆藝無盡藏)" (2019).

Beginning in 1989, Huang Li-shu won first place in the Art Design Category of the Taiwan Provincial Art Exhibition for three consecutive years, thus becoming permanently exempted from censorship. In 1991, she took part in the Ishikawa Urushi Competition in Japan and won silver. Fourteen years later, in 2005, she was selected for the inaugural Taiwan Crafts Workshop, and in 2009, the Nantou County Government recognized her as an official lacquer craft preserver. Finally, in 2021, the Ministry of Culture named her a preserver of the important traditional craft of lacquer art.