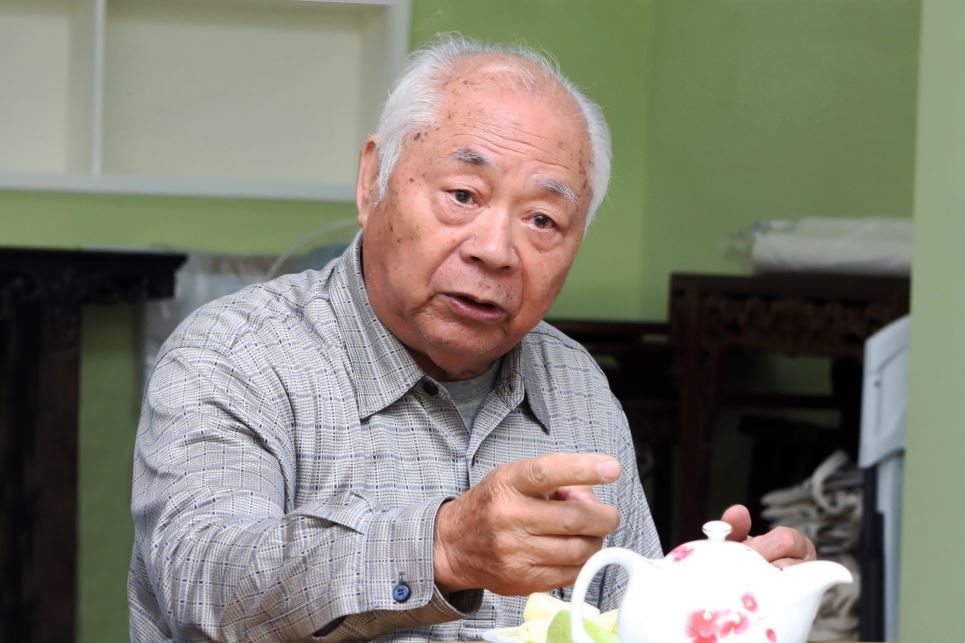 Chinese Name: 莊武男
Date of Birth: June 27, 1942
Place of Birth: Location: Tamsui, New Taipei City, Taiwan
Did You Know?
Zhuang Wu-nan has been involved in traditional temple painting for over six decades and is deeply familiar with the craftsmanship and process of his chosen art form. His painting is vibrant and rich, with soft, smooth lines, elegant colors, and agile use of patterns. Particularly notable are his works on duotou (垛頭), the painting on the heads of the transverse beams in temples, and Zhuang is considered the preeminent Taiwanese master of these. In 2021, he was honored by the Ministry of Culture as a preserver of the important traditional craft of traditional temple painting.

Zhuang Wu-nan's family has been farming for generations. When he was a child, they were so poor that he couldn’t afford to buy paper, and so he would help his classmates with their art homework in exchange for drawing paper for his own art. At the age of 16, he left home to learn temple painting techniques under the famed color painter in Monga, Hung Bao-chan (洪寶真). He studied with Master Hung for just three years. During this period, he went all over the island and met with masters from different schools, including Pan Li-shui (潘麗水), Chen Shou-yi (陳壽彝), Li Jin-cyuan (李金泉), and Chen Yu-fon (陳玉峰), receiving valuable guidance when working alongside them and significantly improving his painting skills. After finishing his apprenticeship, he began to independently take on projects, quickly earning a name for himself through his ability to integrate his work with that of other artists. Often, in the process of building and decorating a temple, two artisans will be working alongside one another, and coordinating between two different approaches and schools can require a lot of hard work and a solid artistic foundation.

Zhuang has a strong understanding of all the processes and techniques involved in temple painting, as well as the traditions that underpin them and how the traditional tools of the trade are made. As a result, his painting is vibrant and rich, with soft, smooth lines, elegant colors, and agile use of patterns. Particularly notable are his works on duotou, the painting on the heads of the transverse beams in temples, and Zhuang is considered the preeminent Taiwanese master of these.

Zhuang Wu-nan’s works can be found all over Taiwan and even abroad. In addition to traditional temple paintings, he has also branched out into ink wash, pottery prints, sculpture, and other artistic fields, as well as working on the restoration of cultural relics and traditional buildings. His colorful painting can be found in the Tamsui Fuyou and Longshan Temples, Banqiao’s Baoan and Chaohe Temples, the National Museum of History, Dihua Street’s Xingxin Temple, Shilin’s Cicheng Temple, the Taipei Confucius Temple, the Lin Family Mansion in Banqiao, Sanchih’s Fucheng Temple, Jinshan’s Cihu Temple, Taipei’s Guandu Temple, the Songshan Ciyou Temple, Tamsui’s Xingzhong Hall, Gugang Tower in Kinmen, Wenwu Temple at Sun Moon Lake, and the Han Family Ancestral Shrine in Bali, Indonesia.

As time continues to consume traditional relics, Zhuang has since starting his career in temple painting and made it his mission to purchase collections at his own expense whenever he has accumulated enough money. In 1988, he turned his attention from temple painting projects to collecting cultural relics. He established the Huwei Cultural Relics Society and Huwei Cultural Relics Exhibition Center to display his collection, along with pottery prints and Taiwan cultural relics he has painted, stone carvings, Buddha statues, stone lions, and more. He also has plans to store and display pieces at the Jinxiuzhuang Cultural Park. He is also committed to local affairs and education promotion, holding various exhibitions and activities, and taking on roles with traditional art and art-related groups like the Association of Traditional Craftsmen and the Tamsui Culture Foundation. Over the years, Zhuang Wu-nan has taken on ten disciples including Huang Ming-shu (黃名樹) and Zhuang Jian (莊堅). Feeling that he bears the somber responsibility of preserving and passing on this traditional craft, since 2001, he has been teaching temple painting at Tamsui Community University, giving interested members of the public a way to get started.