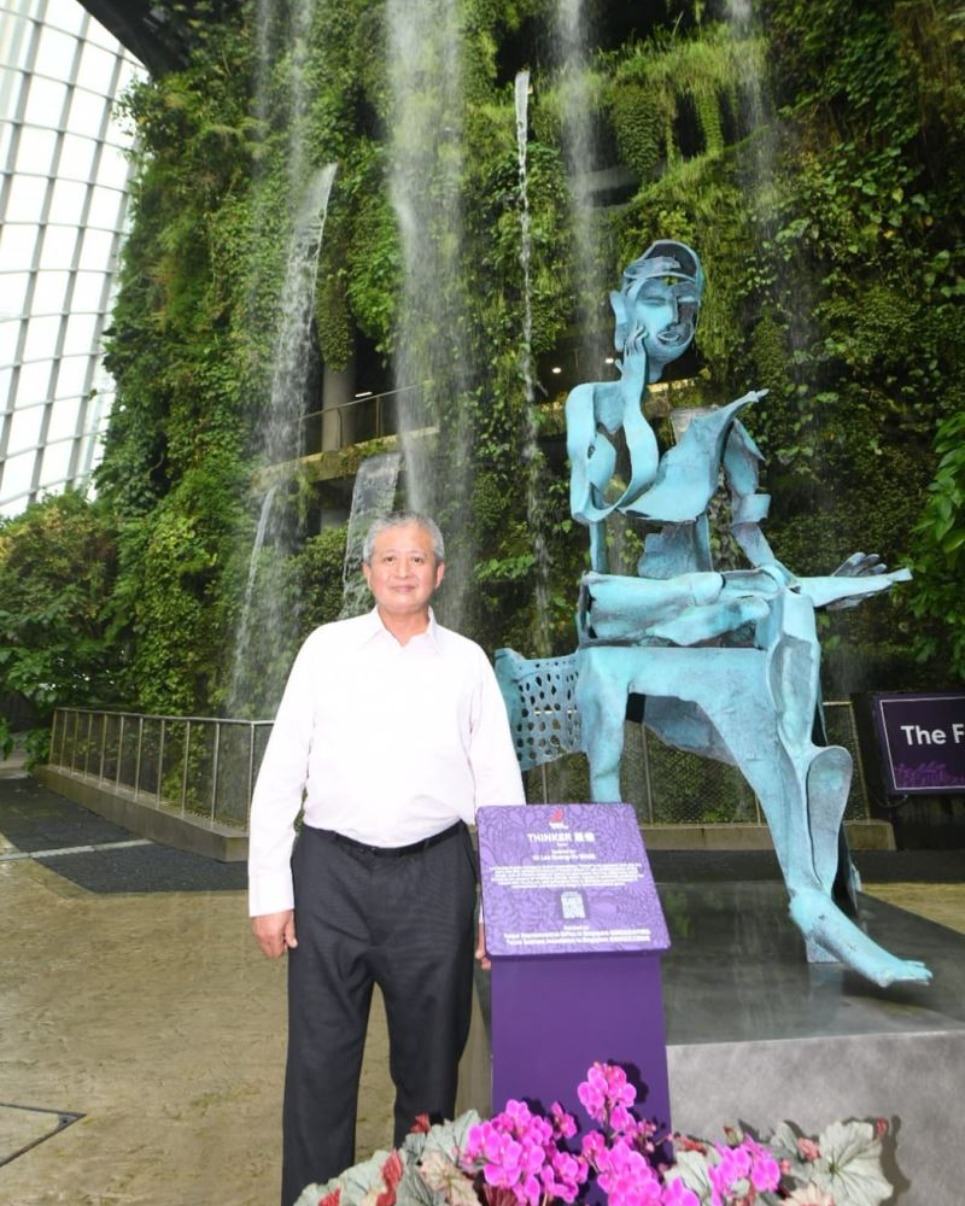 Chinese Name: 李光裕
Date of Birth: 1954
Place of Birth: Kaohsiung, Taiwan
Did You Know?
Taiwanese sculptor Lee Kuang-yu brings together the concept of East and West in his works to capture a full picture of humanity. With an open mind, he has taken on ideas and attitudes from both Eastern and Western cultures, incorporating his own Taiwanese culture and Buddhist beliefs with an understanding of Western modernism to create a unique style of sculpture all his own.

Lee Kuang-yu was born in the small town of Neiwei in Kaohsiung in 1954. After completing high school, he went on to complete an undergraduate program at the National Taiwan Academy of Arts (now the National Taiwan University of Arts) in 1975. Three years later, in 1978, he went to Spain to continue his studies at the graduate level, graduating from the Real Academia de Bellas Artes de San Fernando in 1982. While there, he studied under Professor Francisco Toledo Sanchez, a renowned Spanish sculptor of the human figure; after graduation, he continued on with studies at the Universidad Complutense de Madrid (UCM), graduating in 1983. After returning to Taiwan, he taught at the National Taiwan Academy of Arts and, later, the Department of Fine Arts at the National Taiwan University of Arts. After his retirement in 2006, he turned his full attention to his creative work.

As a young adult in the 1970s, Lee grew up among the heated literary debates around the question of Nativization in Taiwanese literature and the dialectic between the international and the local. Later, he traveled to Europe to receive technical and theoretical training, becoming even more committed to reflecting on his own cultural background and the foundations of his life. In addition to re-exploring the charm of Eastern aesthetics through statues, antiques, and cultural relics, he also devoted himself to Zen Buddhism, Tibetan Buddhism, and Qigong.

Lee’s sculptural work in the 1990s showcased round, solid aesthetics and the spiritual concept of Eastern Buddhism and Zen. Among his most iconic works from this period are "Lotus Grip (蓮花持)," "Heart and Hand (心手相蓮)," and "Little Park (小公園)," all on display in Taipei's National Taiwan University Hospital Metro Station; and “Meditation II (凝Ⅱ),” which is presented in the outdoor plaza of the National Taiwan Museum of Fine Arts in Taichung. In the new millennium, his sculptures began to explore perforated and hollowed-out shapes, presenting spatial structures of openwork and borrowed scenery, the coexistence of the virtual and the real, and integration into space, as embodied in works like the "Empty Mountains (空山)" and "Transcendental Existence II (妙有Ⅱ)" series.

Since 2013, his creations have sought to further express an aesthetic of "emptiness." The 2016 "Bullfighting (鬥牛)" series, a tribute to the novelist Ernest Hemingway, is a classic example. In addition to openwork, Lee's creative approach mainly made use of methods like welding, assembling, and bending metal to create the frame of the bull. Lee Kuang-yu makes use of all dimensions, points, lines, and planes, to create fully three-dimensional sculptures, folding lines, curved surfaces, slices, and bodies in space with a freehand style that calls to mind traditional Chinese painting and calligraphy. Lee was invited to present the “Bullfighting” series at the National Pavilion of San Marino at the Palazzo Rota Ivancich for the 57th Venice Biennale in a special solo exhibition entitled "To Have and Have Not." Lee’s specially created works were on show alongside 30 other pieces, including "Flying (飛來)."

Over the years, Lee has accumulated extensive experience in international exhibitions, and his works have become widely collected by both public institutions and private individuals. In 2022, he donated the bronze sculpture "Thinker (思惟)" to Gardens by the Bay, Singapore. This work mainly expounds upon the idea that when people come into the world, the most important thing is that they are able to think and help civilization make great progress. This is also the first time Gardens by the Bay has received a Taiwanese artwork.

Lee Kuang-yu's sculptures contain within them Buddhist and other philosophical ideas, all deeply focused on the essential nature of human life. "In my sculpture, I aim to inject ideals and a fantastical humanity into a wide variety of forms and the molding of space," he says. In recent years, Lee has used the digging of holes and transformation of space to expand the visual nature of sculpture and reach into the metaphysics of artistic conception to communicate his understanding of life and philosophy through awareness of and reflection on the body. Lee once remarked that "in my art, I see my disenchantment, color, and brilliance, and in life, I have learned that it is only by accepting my imperfections that I can have the opportunity to learn what it is to become perfect."