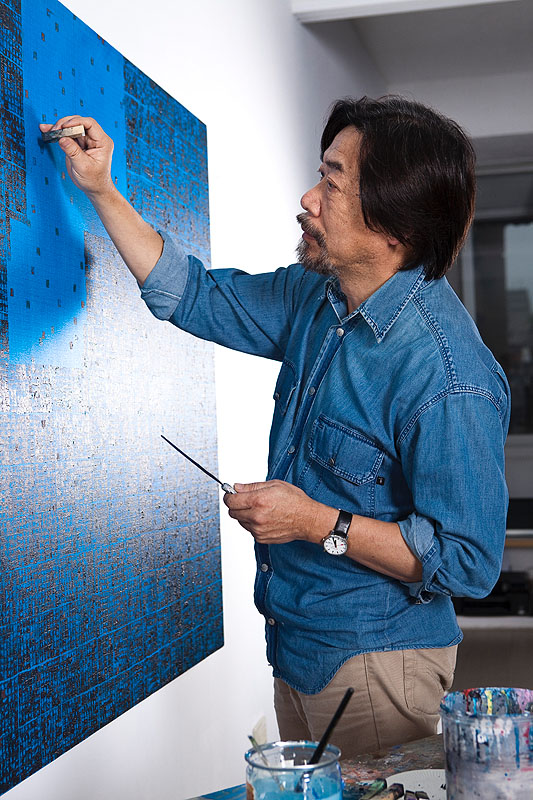 Chinese Name: 莊普
Date of Birth: February 26, 1947
Place of Birth: Shanghai, China
Did You Know?
Tsong Pu came to prominence, particularly for his use of 1-cm square seals rather than more traditional brushes to craft his famed multi-media creations. Tsong has become an iconic figure in Taiwanese contemporary art, with many coming to consider him an artist who straddles the line between poet and philosopher. In 2019, his long-time dedication to innovation in art saw him honored with the award in the art category of the 21st National Award for Arts.

Born in Shanghai, China, in 1947, Tsong Pu came to Taiwan with his family in 1949. After graduating from Fu-Hsin Trade and Arts School in 1969, he was admitted to the University of Madrid’s School of Art in Spain in 1973. After living in Spain for eight years, he returned to Taiwan in 1981 to participate in the Studio of Contemporary Art (SOCA); that same year, he met artist Richard Lin (林壽宇) and began to dedicate himself to minimalism with a drive that made him feel "almost like a revolutionary." Tsong Pu's artistic creations explore the materiality of his materials, highlighting the materials themselves rather than using them to reproduce other things.

In 1983, he held his first solo exhibition, “An Encounter Between Mind and Material (心靈與材質的邂逅),” at the Spring Fine Arts Gallery in Taipei. In 1988, he founded the IT Park art space with Liu Ching-tang (劉慶堂) and Chen Hui-chiao (陳慧嶠) to promote the contemporary art movement in Taiwan. To date, Tsong has held nearly 30 solo exhibitions, each of which has stirred up its own degree of shock and discussion. In 1992, Tsong Pu won the Taipei Biennial Award for "Transposition of Light and Water (光與水的移位)." The piece consisted of a cubic container made of transparent glass, and through changes in water and light and the penetration, reflection, and refraction of the glass, a rich vision of space and time was created.

Tsong Pu’s work is about giving new life to materials and liberating techniques. He does not use painting tools to create his flat works but rather uses needles, threads, knives, scissors, and particularly a 1-cm square wooden seal of his own invention. As for his three-dimensional works, in these, he even makes use of things like metal wrenches and industrial machines. Tsong brings a poet’s perspective to his art, so the Chinese characters that feature in his works are not simply meaningless additions. His artistic creation is itself a form of poetry writing—that is to say, his works are rich with poetic elements. For example, his 1996 piece "Backyard in June (六月裡的後花園)" is not only a piece of installation art, but also a poem containing symbols and metaphors; and "A Bed for the River (送給河流的一張床)," from 1998, is not only a piece of landscape installation art, but also a graphical poem, a calligramme, recording his travels. In addition, Tsong’s poetry is closely tied to everyday life, recording his feelings about what is happening in the world and society in an almost diaristic manner.

Tsong Pu's work can be described as an attempt to take art back to a place where it has not yet been restricted by systematization, as a search for a new start. In 2019, Tsong was the winner of the Art category at the 21st National Award for Arts. The National Culture and Arts Foundation stated that their reasons for honoring Tsong with this award were his lifelong devotion to artistic creation and his undulled enthusiasm and experimental spirit. The art of Tsong Pu juxtaposes material and perception to create artistic adventures. His efforts to actively promote contemporary art have also made him an ongoing inspiration and influence on Taiwan's art world.