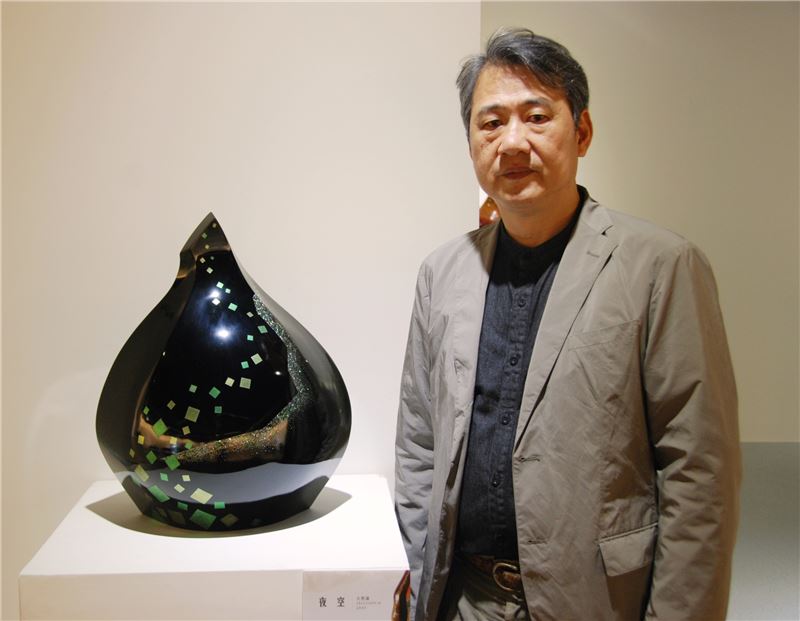 Chinese Name: 彭坤炎
Date of Birth: 1958
Place of Birth: Hsinchu County, Taiwan
Did You Know?
Driven by a commitment to challenging himself, lacquer artist Peng Kun-yen hopes to elevate layered lacquer work from handicraft to pure art through self-guided education and pioneering of techniques. His unique lacquer sculpture, renowned for its refined form and quality, is highly valued throughout the art world and has won a variety of awards at home and abroad. Peng and his art could rightly be considered the pride of Taiwan. In 2011, Peng was recognized by the Ministry of Culture's Bureau of Cultural Heritage as a preserver of intangible cultural heritage.

Peng Kun-yen got his first exposure to lacquerware art at the age of 14. He took up work as an apprentice working on mahogany furniture, doing raw lacquer painting work, and later became his own boss, taking on orders from Japan. However, in the late 1980s, the mahogany furniture industry began moving out of Taiwan, resulting in Peng facing some business difficulties. With the encouragement of some friends in Japan, in 1986, he made the transition into creating lacquer art. Peng never majored in art as a student, instead, he taught himself the skills of the craft. He has spent time poring over a number of ancient Chinese texts and books on lacquer art from Japan, ultimately teaching himself and pioneering his own unique lacquer layering technique. Ordinarily, lacquerware uses wood or cloth for the embryo, with the raw lacquer applied over the top of this; Peng's layered lacquering method, in contrast, uses no embryo, with the lacquer simply directly applied. Due to having to wait for the lacquer to dry, the whole process can only be done at a rate of one centimeter each day, meaning that a single piece of work usually takes more than six to ten months to complete. His works combine modern trends in sculpture and Peng's own subjective intentions and conceptions. Each piece launches with a gut feeling, and sometimes when the lacquer hits the air, the changes that happen in it can make it harder to layer things the way he envisioned, and rather than compromise his vision, Peng will simply smash the aborted work.

Feeling the art world was full of painting and calligraphy groups, in 1995, Peng took the initiative to launch an art club with seven other master craftspeople from a variety of fields, facilitating the exchange of ideas and refinement of skills, as well as holding regular group exhibitions. Peng Kun-yen was also certified by the National Taiwan Craft Research and Development Institute for the fifth Taiwan Crafts Workshop in 2012 for his dedication to promoting and teaching artistic techniques. His original lacquer layering technique has elevated lacquer art from handicraft to pure art. Building on traditional lacquer art, Peng has incorporated modern philosophies of sculpture, creating fine, warm, and elegant textures that are highly valued by the art world and the art-loving public. In 2011, Peng was honored as a preserver of intangible cultural heritage by the Bureau of Cultural Heritage of the Ministry of Culture.

Peng has been invited to exhibit his works around the world, from Europe and America to Australia, Japan, and elsewhere, winning several major awards. Since 1997, he has been invited to participate in the "Beauty of Urushi, Japanese Lacquer" exhibition and won multiple awards. In 2006, he was awarded the Japan Painters' Association President’s Award, the first person from outside of Japan to receive this honor, and was received and commended by His Royal Highness Yoshihito, Prince Katsura. In 2019, he won the grand prize of the Minister of Agriculture, Forestry and Fisheries Award at the 26th “Beauty of Uruship, Japanese Lacquer” exhibition for his piece "The Sound of Tides (潮音)," a work that was inspired by the seaside of Nanliao in Peng's hometown of Hsinchu. The main material is natural lacquer, and its form is mainly shaped with metallic foil and a multi-layer treatment, replicating the sunset that is reflected in the waves and the sound of the waves lapping against the shore. That same year, his work "Southern Islands Scenery (南島風光)" was selected for the Japan Fine Arts Exhibition, the highest honor in the Japanese art world. The following year, his piece "Tolerance (包容)" was selected for the Meiji Jingu 100-year Anniversary, becoming part of the collection of the Meiji Jingu Museum in recognition of Peng’s lacquer art and his efforts to deepen cultural exchange between Taiwan and Japan over the past 20 over years. "Tolerance" was made with layered lacquering and took more than ten months to make. The shape of the work is like a full, rounded bottle, with tactful lines and abstract connotations that can be best appreciated by someone with an open and tolerant mind. As such, it could be considered the physical embodiment of prayer for prosperity and peace across society.

After decades of hard work, Peng began to have the idea of finding ways to contribute to the development of the domestic lacquer art scene. In 2020, he proposed to the Ministry of Culture the "Traditional Painted Lacquer Skills Teaching Project," fully photographing, documenting, and explaining the creation process of the work "Roiling Clouds (雲湧)" with the aim of facilitating the future passing on of his lacquer art techniques. In addition, he has promoted a number of exchange exhibitions with Japanese artists, aiming to promote local development through such interactions and giving people in Taiwan a better insight into and understanding of lacquer art.