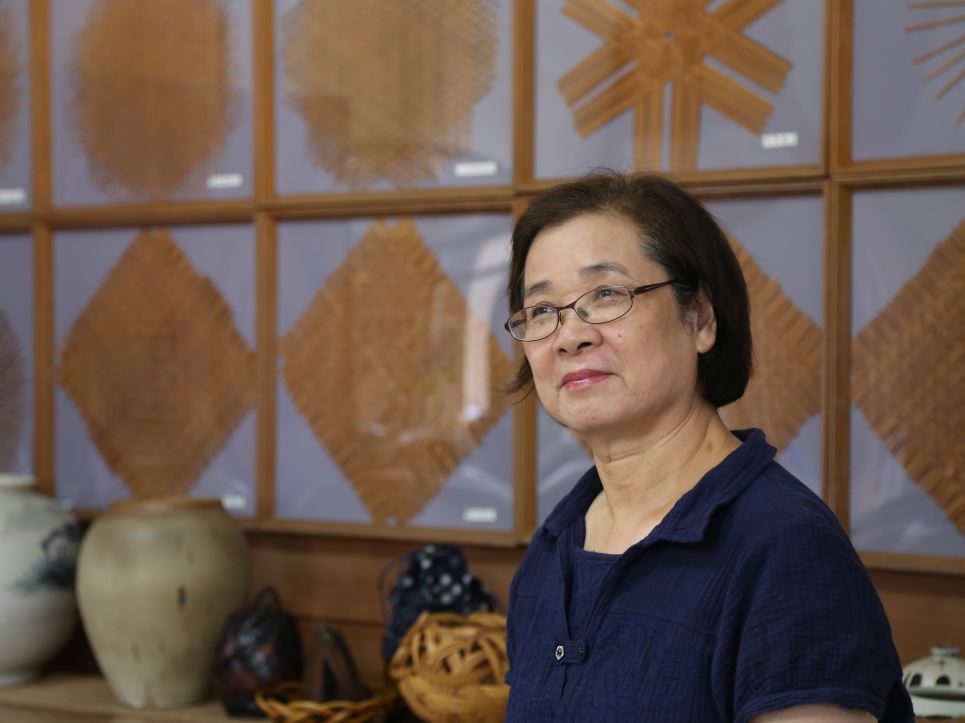 Chinese Name: 林秀鳳
Date of Birth: 1954
Place of Birth: Nantou, Taiwan
Did You Know?
Bamboo weaving master Lin Hsiu-feng has been deeply involved in the field of bamboo art for more than 50 years. Not only does she excel at traditional bamboo weaving, she also writes books to elucidate her perspective on the art and the world. She works to pass on and promote traditional bamboo weaving through teaching, publishing, exhibitions and participating in international activities. In 2020, she was registered by the Nantou County Government as a preserver of the intangible cultural asset of bamboo weaving.

Lin Hsiu-feng was born in Caotun, Nantou County. In 1971, her family situation saw her move to study part-time so she could also work part-time to help support them. In order to find a job that would give her more time to study, she was introduced by a friend to the Nantou County Handicrafts Research Center, studying under Master Huang Tushan (黃塗山). From 1975, she began working at the Taiwan Province Handicraft Research Center as a teaching assistant to Huang, assisting in the teaching of bamboo art. Lin, who particularly enjoys work that involves the passing on of experience, had the idea of recording the teaching process and making teaching materials.

From 1975 to 1991, she invested heavily in talent training and product development. In the 1980s, Taiwan's traditional craft industries entered a period of rapid decline, and the Handicraft Research Center was transformed into an institution dedicated to promoting the development of the craft industry with a focus on the cultural level. In the 1990s, a trend emerged for the revitalization of local industries and community building, and Lin Hsiu-feng explored in depth the various aspects of bamboo-related people, culture, land, scenery, production, research, and industrial guidance, holding exhibitions to publicize her results among the public. In 1991, Huang Tushan retired, and Lin took over his bamboo craft workshop.

In 1999, the Taiwan Province Handicraft Research Center was renamed the National Taiwan Craft Research and Development Institute. Lin planned out camp courses including Bamboo Tube Furniture Skills Training, Bamboo and Composite Media Product Design and Development, Bamboo Craft Landscape Studies, Creative Value-Added Bamboo Art Product Development Research, and Bamboo Steamer Production and Product Transformation Development, personally leading several of them as a teacher, to promote innovation and creative integration of traditional crafts with contemporary life. After the Jiji earthquake in September 1999 wreaked havoc on Nantou County, Lin devoted herself to the recovery and regeneration of the bamboo art industry there.

Since the 2000s, Taiwan has been actively engaged in developing domestic cultural and creative industries. As part of this, Lin has visited Japan a number of times as a visiting scholar of the Japan-Taiwan Exchange Association to learn from the industries there and come back with new ideas to provide to local governments. Among these ideas has been the planning and holding of hands-on lessons at the National Taiwan Craft Research and Development Institute. In 2012, she began working with the Bureau of Labor (now the Ministry of Labor) on the formulation of skills certification standards for bamboo weaving technicians, as well as serving as a member of committees on academic and technical subjects. She has also worked as a reviewer of the Ministry of Culture's "Taiwan Bamboo Career Development Basic Survey," a comprehensive look at careers in the industry. In 2018, Lin Hsiu-feng retired from the National Taiwan Craft Research and Development Institute.

Lin has a wealth of creations and publications to her name, often choosing books as her means of demonstrating herself, writing explanations of the essentials of each step, and naming actions and gestures that do not already have names. Her presentation of her teaching materials has also kept pace with the times—in addition to text and photography, she has also incorporated animation, sound, and video to help correctly convey the steps. A digital bamboo craft industry database has been completed on the official website of the Ministry of Culture to facilitate later browsing and learning. Lin Hsiu-feng has not limited herself solely to bamboo, however—she has also studied the use of materials like yellow rattan, rush grass, ashitaba, shell ginger, and false staghorn fern. In 2009, she edited "Rattan Work Craft (藤繞的23種技法)," winning the Excellent Government Publication and marking the start of cooperation between craftspeople and illustrators in Taiwan.

Lin's works have been selected seven times for national or provincial art exhibitions, as well as for the Weaving Craft Award and the Silver Award for Outstanding Works at the 14th Putian Straits Arts and Crafts Fair. In 2004, she was named a Model Civil Servant by the Council for Cultural Affairs, and she was also the first Taiwanese bamboo weaver to give a demonstration of the craft at the French Senate. She has held a number of exhibitions and speeches at home and abroad, showcasing Taiwan to the world and earning praise from the chairman of the World Bamboo Organization, Michel Abadie, as the leader of creative bamboo crafts in Taiwan.

Over the past 50 years, Lin Hsiu-feng has continuously pursued innovation and breakthroughs in bamboo art, moving from simply developing her skills toward a more contemporary art direction. She is invited to hold solo exhibitions every year and works to keep bamboo art alive through teaching and writing books, sharing her life experience and the spirit of her craft. In many ways, Lin Hsiu-feng is herself a lot like bamboo—the picture of strength and resilience on the outside, with a wide-open heart on the inside.