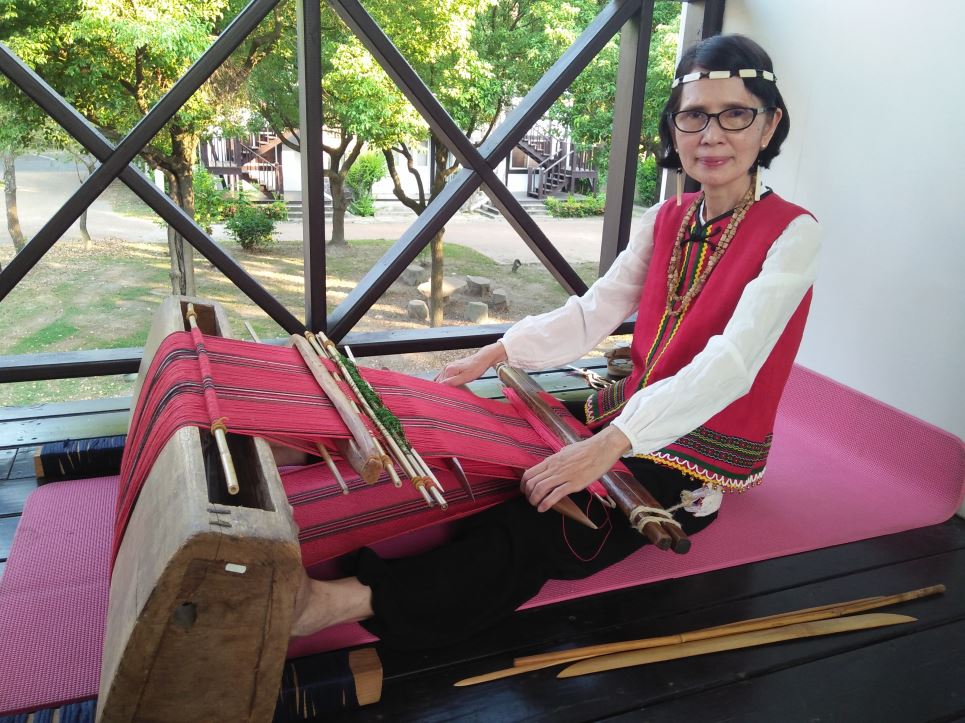 ‧Chinese Name: 張鳳英
‧Year of Birth: 1957
‧Place of Birth: Nantou County (Central Taiwan)
Did You Know?
Seta Bakan's grandmother, Seta Iban (張玉英, 1919-2008), was the top weaver of the Sediq people. She began weaving at the age of 10, and with nearly 80 years of experience, her weaving skills were unmatched by anyone in her tribe. People from other indigenous peoples even came to her for advice! Even during Japanese rule, when most indigenous traditions, including tattooing and weaving, were banned, she continued to weave away, staying quiet and under the radar. "If it weren't for the fact the Ministry of Culture only started certifying people as Living National Treasures in 2009, Grandma would easily have been the first of the Sediq people to get the honor," Seta Bakan notes modestly.

Seta Bakan was born in the Sediq village of Alang nakahara in Ren'ai Township, Nantou County, and has become an important preserver of the Gaya tminun traditional weaving craft of her people and recognized by the Ministry of Culture as an indigenous Living National Treasure. She is proud to be the first craftsperson from the Sediq people to be so honored and to continue her work passing on this traditional weaving craft. For her, she says, weaving is a way of remembering her grandmother.

Seta Bakan learned her craft from her grandmother, who was dedicated to keeping this traditional craft alive. Her grandmother, Seta Iban, had long been recognized as a master weaver by her people, and was even interviewed by the Public Television Service about it. For as long as she can remember, Seta Bakan saw famous artists, and even visitors from Japan, seek her grandmother out to weave for them; she truly was the pride of the family.

In traditional Sediq society, weaving is considered one of the skills required a woman must traditionally learn. A woman skilled at weaving would be praised by all and considered and a "mqetin bale," a "real woman." mqetin bale must be hardworking and talented to earn passage across the Hako Utux (Rainbow Bridge) after their passing and reunite with the spirits of their ancestors.

The most distinctive feature of Sediq weaving is a technique known as "puniri," which is unique to the Sediq people and can produce patterns such as diamonds and ovals. The most representative characteristic of the puniri technique is that the cloth is woven with a three-dimensional look, using the warp threads to wrap around the weft threads. If the warp thread is red and the weft thread is white, Seta Bakan offers as an example, the pattern will be red on the front side of the cloth, but if you look at it from another angle, you will see a white pattern hidden in it, giving it a very layered feel.

To weave cloth, Seta Baka will start with the raw material, ramie that she has planted herself. Ramie was a staple of making clothes in the days when cotton and plastic fibers were not yet developed. Early Sediq women, Seta Bakan explains, would have a plot of land dedicated to growing ramie, peeling the outer layer off to make their own linen yarn. This process is very laborious, requiring washing, drying, and twisting the stripped fibers to make them into usable yarn. Even after that, the yarn is still very rough, so it has to be cooked to soften it. The Sediq people also burn the bark of ramie into ash, rub the yarn in the ash, then wash and dry it to bleach the yarn, preparing it to be dyed with various plant-derived dyes. Because the process is so complicated, the younger generation is rarely exposed to traditional weaving, and while this is something that saddens Seta Bakan, it has also inspired her even more to make sure the craft is kept alive and passed on to future generations.

Seta Bakan has thus turned to compiling a written record of her grandmother's techniques, using words and images to document a traditional craft that has historically only been passed down orally in the Sediq language, meaning Seta Bakan also has to translate it into Chinese to make it accessible to a wider audience. A few years ago, her husband retired and joined in the work of collecting and compiling this information, and in 2021, she published the book "Three Generations of Weavers: The Techniques and Memories of a Sediq Family (三代織女：一個賽德克家族的技藝與記憶)," finally formally preserving these vanishing weaving techniques for future generations.