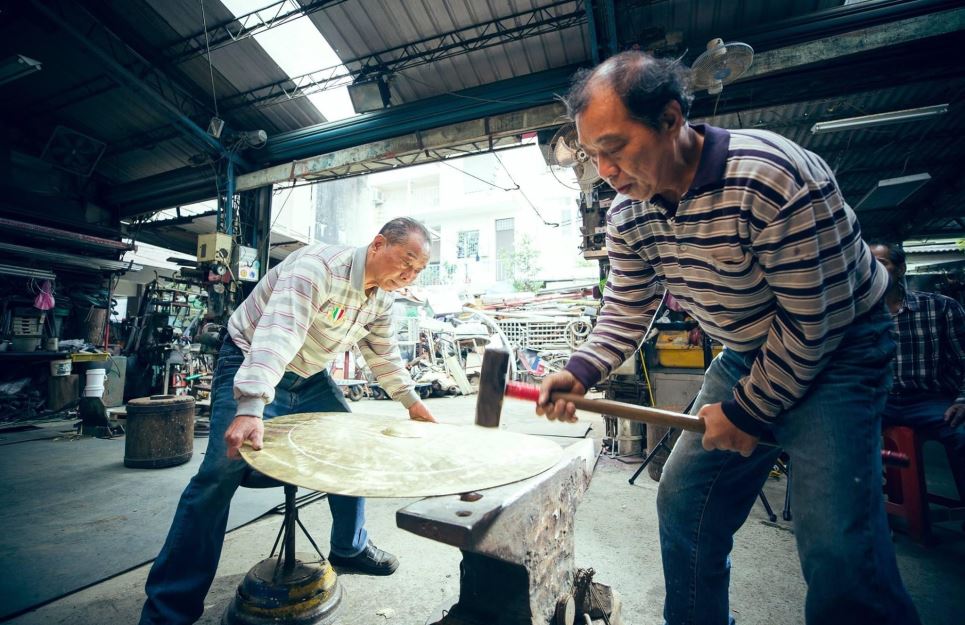 Lin Lieh-hui was born in Yilan County in 1943. His father, Lin Wu, opened an iron factory in the area, mainly undertaking work such as blacksmithing, sheet metal working, and agricultural machinery repair. Lin Lieh-hui was the second child. Lin Lieh-hui, together with his eldest brother Lin Lieh-chung and younger brother Lin Lieh-chi, followed in their father’s footsteps working in the iron factory when he was a teenager. Lin recalls that one day, a Beiguan musician sent in a broken gong to be repaired. His father, a trailblazer by nature, did experiments every day, studied repairing techniques, and taught himself to repair the instrument properly. In the end, his father not only repaired the broken gong, but also went on to create the first copper gong in Taiwan to be hammered out from a copper sheet. The rich, clear sound the gong produced impressed the music world. “There were no master gong makers in Taiwan in the early days,” says Lin. “Most of the gongs came from Java, Indonesia. Later, they were replaced by the gongs developed by my father, which became very popular in the music world.”

And thus did Lin Wu, with no master to teach him, found his own gong-making dynasty. Lin Wu Iron Works became famous for making gongs by hand. Over time, the gongs became bigger and bigger, expanding from the initial diameter of two feet (about 60 cm) to ultimately reaching a massive eight feet (about 240 cm). In 1985, he was invited to make a large gong with a diameter of nearly 200 cm, a weight of 160 kg, and a height taller than a grown adult for Beigang’s Chaotian Temple. The resulting gong could be heard over a kilometer away, shocking the country.

Lin Wu Iron Works later became an important factory for the production of gongs used by various temples and in traditional folk orchestras all over Taiwan. After his father passed away, Lin Lieh-hui and his brothers took over the reins of the Lin Wu Iron Works, and now they gradually pass on the skills of gong-making to a third generation. The three brothers have kept their father’s gong-making work going for more than 60 years. Despite their increasing age, they remain as diligent as ever in their hammering, welding, and tuning of the gongs and are still as capable as ever of hoisting the almost 10 kg hammer to sound the gongs. Lin Lieh-hui and his two brothers insist on approaching the work of making their extraordinary gongs with the spirit of the blacksmith.

The most tiring part of the gong-making process is beating out the edge. In a three-person job, one person hammers it while two hold the two ends of the copper piece and slowly turn it, gradually transforming the straight copper piece into a perfect arc. It takes at least a whole day and four or five thousand strikes. The three brothers are often left with sore arms, and their hearing has long been affected by the process.

As for the gong nipple protruding from the center of the gong, this is a test of the experience of the gong-maker. It must be hammered slowly from the inside out with hammers of various sizes, with a strong grasp of its depth and strength. Throughout the process, the maker must make constant adjustments to create a truly beautiful nipple. The last step of tuning is a test of the master gong-maker's sense of pitch. After the gong-maker hoists the finished gong, he taps on various parts of the surface to test the sound. He must be able to hear the subtle differences and constantly adjust the pitch and sound quality. Tuning is a unique skill in gong-making, requiring slow and careful work, which can’t be rushed, and sometimes it can take a whole day just to tune one gong. In addition to physical fitness, a keen ear is even more important in making hand-made gongs.

Under the concerted management of the brothers, the gongs produced by the Lin Wu Iron Works have combined traditional craftsmanship with modern needs, making special gongs for famous performing troupes like U-Theatre, Ju Percussion Group, and Lanyang Opera Company. They also strive to innovate in the fields of cultural creativity and tourism, injecting new vitality into traditional crafts and actively participating in the promotion of the art of gong-making in communities and schools to keep this wonderous tradition thriving across generations.