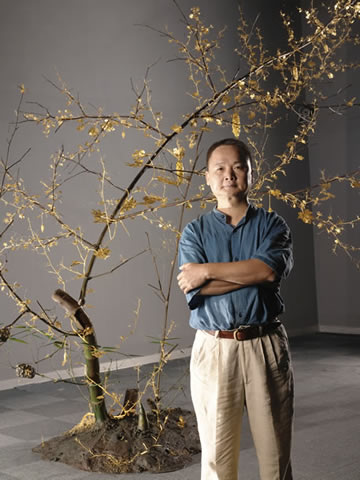 Representative of the rural scenery of southern Taiwan, the deep green rice fields of the Chianan Plain (嘉南平原) stretch out as far as the eye can see, and the scent of the paddies mingle with flower fields blazing with color. This is Wu Ching's native home. While growing up in a farming village surrounded by fields and streams, Wu's childhood playmates were dragonflies, frogs, crabs, fish, and plants.

At the age of 18, Wu saw a friend practicing commercial woodwork and was so intrigued that he began to teach himself sculpture. Wu also traveled all over Taiwan to visit master sculptors, only to discover that the traditional techniques, tools, and applications of sculpting all impose certain limitations. Thus he began to study, design, and refine carving tools better suited to his own style.

Wu's unique set of sculpting tools includes modified German and Swedish steel lathe gravers and a Japanese woodcarving chisel. Wu specially shaped and sharpened the curve and length of the blades to suit his particular creative needs. Moreover, he has a complete set of dental instruments, and has also experimented with a surgeon's scalpel.

At the age of 19, Wu was walking along a riverbank one day when he suddenly discovered a group of ants moving a gecko egg. The way the tiny ants slowly moved the large gecko egg up the slope with such amazing strength, grace, and agility struck a chord with Wu and stirred his curiosity.

Aiming to develop a method which would give a full and balanced expression to the brisk creature while also incorporating artistic creativity, Wu completed 25 detailed woodcarvings of ants over a period of seven years. During this trial-and-error period, he continually refined his technique, gradually discovering the knack of holding the chisel, how to subtly regulate and apply his strength, and how to properly select wood.

One of his ant-themed sculptures is titled "Breakout (掙脫).” Made out of a solid piece of Chinese cypress measuring 3.8 meters high, the 1984 piece depicts a series of movements made by an ant in the process of extricating itself — an allusion to the Zen theme of transcending one's limitations.

In 1989 he set out to explore new artistic territory by using gold as his medium of creative expression. His hope was to combine art with the innate beauty of gold in order to create sculptures that can be preserved for perpetuity.

Working with .9999 grade pure gold, he was able to abandon the traditional soldering process that uses silver, copper or other metals, and directly fuse the separate pieces together at temperatures of over 1,200 degrees Celsius. In this way he succeeded in creating works of art with a smooth and flawless appearance.

Over the past decade, Wu's sculptures in gold have garnered even more critical acclaim than his woodcarvings. Yet many people don't realize that all of his gold sculptures were actually cast from a wooden prototype. Wu always begins by first making a woodcarving, and then uses this prototype to produce a mold to cast the sculpture in gold.

Because boxwood grows very slowly — a piece large enough to carve a life-size head is usually over one thousand years old — it has a fine and closely-woven grain, a smooth luster akin to ivory, and is very durable, making it Wu's preferred woodcarving material. Most sculptures are cast from a mold made from a wax prototype; however, sculptures made in this way simply don't compare in detail and texture to those cast from a mold made from a boxwood prototype.

In 1993 Taipei's National Palace Museum purchased Wu's "Prosperous Descendants (瓜瓞綿綿),” a gold sculpture measuring 280 centimeters in height, 120 centimeters in length, and 38 centimeters in width. It features three bitter melons and 238 ants, and also includes a variety of insects, grasses, and saplings, all arranged on an 80-kilogram base made of silver and clay and a bronze frame in the form of bamboo.

This highly elaborate, large-scale gold sculpture is indeed a rarity, and marks the first time in its 40-year history that the museum has purchased the work of a living artist.