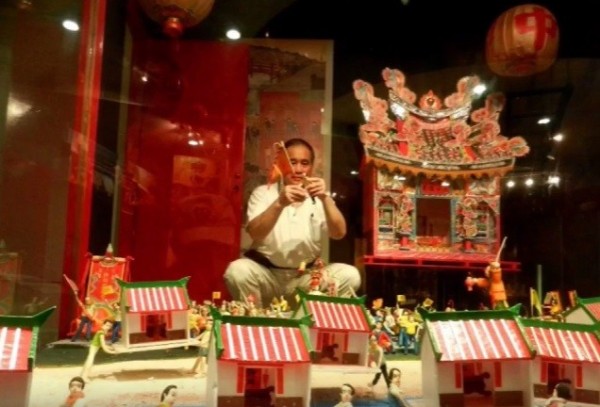 As a preservationist of a traditional folk craft known as rice dough sculpturing, Xie has been promoting the folk art since the mid 1980s. Moreover, Xie also teaches the history and culture of the Ghost Festival, which uses dough figurines as offerings.

The history of dough figurines can be dated back to the Three Kingdoms period. Chancellor Zhuge Liang (諸葛亮) reportedly came up with the idea to make human and animal figures from rice dough to replace human sacrifice for gods and ghosts.

After studying eastern and western painting techniques in school, Xie became more creative in terms of his use of style, color, and materials. In addition, Xie infused contemporary creativity with the traditional art form, transforming the ritual offerings into cartoonish sculptures.

As the traditionally made dough figurines are prone to crack, Xie developed a new method by adding resin and sculpting techniques to make dough figurines long-lasting and more sculptable. To highlight his original idea, Xie renamed his technique as "rice dough sculpture.”

Determined to promote the dwindling folk art, Xie started to teach rice dough sculpting in universities and teacher training camps in 1988. By 1996, he held the first exhibition featuring rice dough sculptures made by students and teachers at the Keelung Cultural Center, which raised public awareness of the unique art form.

Over the years, he has also made sculptures for the Keelung Mid-Summer Ghost Festival Museum (中元祭祀文化館), which houses cultural relics related to the festival. To make vivid historical figures for the museum, Xie studied TV drama, as well as Taiwanese, Japanese, and Chinese manga and illustrations of historical stories to create lively rice dough sculptures with his painting skills.

In 2006, Xie established the "Keelung Rice Dough Sculpting Art Association (雞籠米雕藝術學會)” to pass down the traditional folk art by opening classes and holding exhibitions. The association also partners with the Keelung Mid-Summer Ghost Festival, which was designated a national heritage asset in 2008, to raise public awareness for the traditional art of rice dough sculpting.