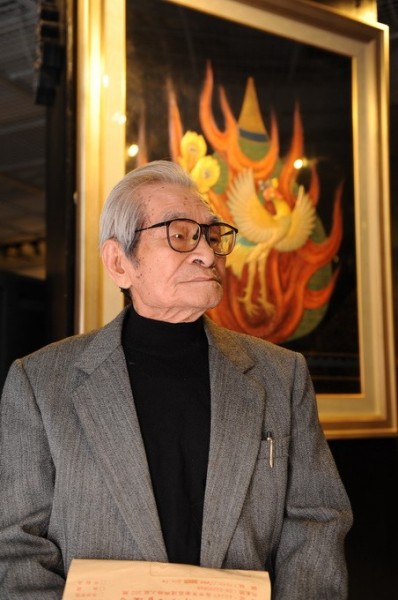 Wang Ching-shuang is the master of lacquer painting, an ancient yet timeless art form that requires such devotion and detail that the 2007 National Crafts Achievement Award winner has produced no more than fifty pieces of artwork in his entire career.

Lacquer, which is a type of tree resin, was discovered by humans as early as seven thousand years ago. Due to its natural brown coloring and protective properties, the sap coating was used to preserve all types of hardwood products, giving rise to a wide array of functional art pieces prized for their glossy sheen and durability.

The Taichung native first studied lacquer art during high school and traveled to Japan to attend the Tokyo Fine Arts School, the predecessor of the Tokyo National University of Fine Arts and Music. He became extremely skillful in the "shih-hui” technique, an embossing method that employs metallic powder to give flat motifs and figures more volume and texture.

Upon returning to Taiwan, Wang also experimented with layering his lacquer paintings with eggshells, seashells, gold powder and mother-of-pearl wedges. Some of his most famous paintings, including "Jade Mountain” and "Attentive Peacocks,” are characterized by the golden luster of the meticulous inlays.

Now well into his 80s, Wang is content to continue investing an average of two years per painting, in which he chooses to avoid chemical lacquer and sticks instead to organic materials such as natural varnish, mineral powder and camphor oil.

Of his pupils that came from all corners of Taiwan to seek his tutelage - including his two sons who've joined his trade - Wang said simply that "what we pass on is the basic know-how. The skills of lacquer art are best learned by doing. How far students progress from there depends on individual talent and effort.”

"Lacquer art is diverse, colorful, and ever-changing. It is part of traditional art.”