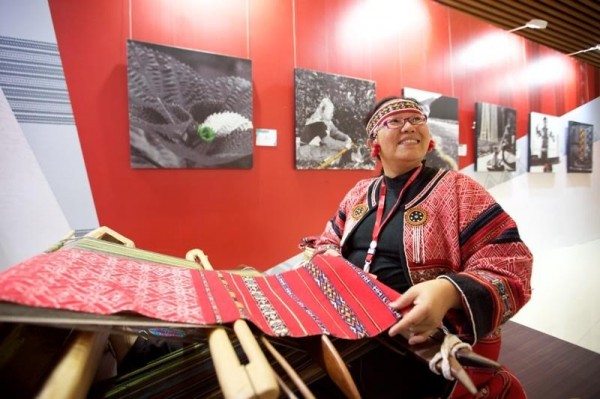 Yuma Taru is a contemporary artisan who has revitalized the unique dyeing and weaving techniques of the Atayal people in Taiwan. In the past two decades, Yuma has carefully researched the roots of her Atayal culture and endeavored to document, promote, and pass down such traditions. Through her efforts, the Atayal weaving tradition is now re-introduced to the public as an art form that embodies the context of indigenous culture.

Born to a Han Chinese father and an Atayal mother, Yuma used to identify herself by her Han Chinese name Huang Ya-li (黃亞莉). Before her current life in the Atayal tribe, she was working as a public servant until her job at the Weaving Craft Museum in Taichung City required her to gather information about Atayal woven crafts. Only then did she realize how distant she was about her heritage as an Atayal descendant.

In 1991, Yuma decided to quit her job and move to the Xiangbi community in Taian Township to learn traditional dyeing and weaving from her grandmother. Though this particular textile craft has always served an important role in the Atayal culture, the practice diminished after the Japanese colonists implemented a policy that suppressed all indigenous activities.

To rebuild cultural roots and help the Atayal people in restoring self-identification, Yuma began growing ramie and other plants on tribal land for textile use and natural dyes. At the same time, she attended Fu Jen Catholic University to study modern techniques in textiles and clothing. Step by step, she began to re-build the fine Atayal tradition with a combination of traditional and modern approaches.

As Yuma started to teach the women of her tribe the weaving and dyeing techniques, they also carried out field studies to reconstruct and document the traditional skills and Atayal aesthetics. A decade later, their joint efforts successfully revitalized the dwindling craft by integrating tribal motifs with modern textiles.

Having secured the traditional Atayal weaving techniques and culture, Yuma now leads members of her tribe to collaborate with fashion designers and create patterns that are both culturally and stylishly relevant. The Meilihang Workshop also participates in art exhibitions to showcase modern pieces that reflect Atayal culture.

Yuma's journey of weaving has reconnected the disappearing ancient tradition to the contemporary life of the Atayal people, and empowered the whole community by creating more job possibilities for the tribe. With the tradition brought to life again, the unique colors and patterns of Atayal culture are now preserved and will continue to weave a new future.