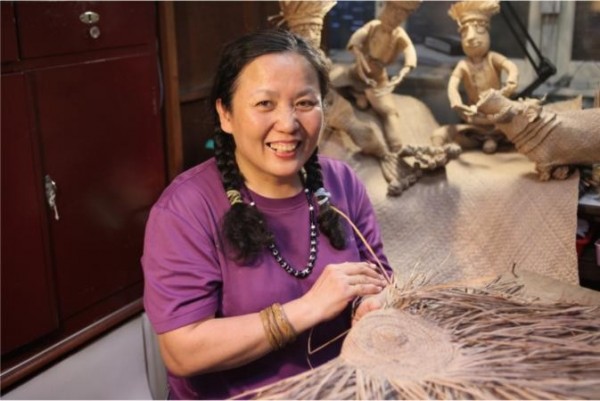 Cheng Mei-yu is a rush weaver who takes inspirations from daily life and incorporates cultural elements in her creations. Her creative and exquisite handicrafts have earned her numerous art awards. For more than two decades, she has played a crucial role in revitalizing the dwindling craft form.

Cheng learned to knit when she was in high school, which prompted her to develop a keen interest in basket weaving and pottery. Cheng came across rush weaving in 1991 when she was volunteering for the Taitung Cultural Center. Her mentor Lin Huang-jiao (林黃嬌), a veteran rush weaver, was holding classes at the center.

Joining Lin's classes became a turning point in Cheng's life. Though she started relatively late at the age of 40, Cheng made a great effort to practice and understand the nature of rush. After learning how to make handbags and straw mats, Cheng's creativity led her to explore ways of creating animal and doll figures.

In 1998, after winning the Traditional Crafts Awards for excellence, she picked up "Chai Si Cho (柴絲草),” a traditional weaving technique that uses wood strands. She later she applied this technique in rush weaving to give her figures a livelier appearance.

Cheng's imagination and skills allow her accomplish seemingly impossible feats. For instance, she was once challenged to make a rush replica of the traditional canoe of the Tao people, and the task took Cheng eight months to figure out ways of creating the curvy shape of a canoe.

Cheng made her breakthrough in 1999 by applying the knitting technique of decreasing stitches she learned in high school to create the first-ever Tao canoe out of rush. This made her the first crafts artist who integrated rush weaving with Taiwan's indigenous heritage.

To pass along her techniques, Cheng joined a training program initiated by the Correction Department of Justice to teach inmates the traditional craft. With her encouragement and patience, she successfully changed their attitudes toward such a craft and several inmates went on to become professional rush weavers.

Cheng now serves as director of her own rush weaving studio based in Taitung City. From creating artworks and joining exhibitions to teaching, she has helped revitalize the nation's cultural heritage and bring to life many local folktales through her rush creations.