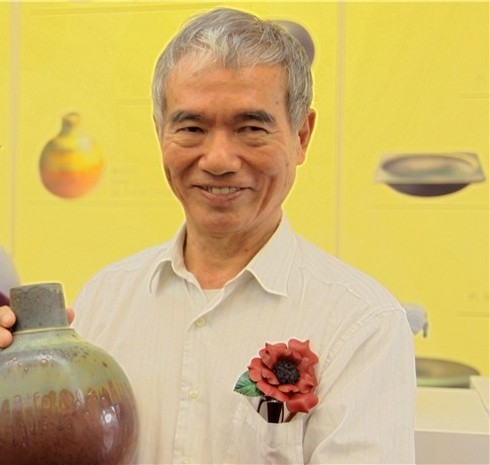 Tsai Jung-yu, one of Taiwan's leading modern ceramic artists and the recipient of the 2011 National Crafts Achievement Award, is renowned for creating pottery pieces that are both aesthetically pleasing yet delightfully functional.

With collection titles such as "Simplicity and Honesty” and "Contentment,” however, Tsai isn't the type to brag about his achievements. In fact, he joked that it took him the entirety of his sixty years to learn the concept of "Tolerance,” the name of his latest collection featuring a blend of molten and hardened clay.

Born and raised in Taichung's Wufeng Township, Tsai worked as a carpenter, factory employee and farmhand before deciding to fully pursue ceramic arts at the age of 33, despite the initial alarm from his wife and his three young children.

Fortunately, his natural talent shone through in 1997, when his artworks were accepted in Italy's Modern Pottery Exhibition. Prior to that honor, Tsai served only two years of apprenticeship under prominent Taiwanese ceramists Lin Pao-jia and Chiu Huan-tang.

From preparing and shaping the clay to the final glazing, Tsai retains full control over the aesthetics and concepts of his works, oftentimes experimenting with hundreds of ways of expressing an idea before finally settling on a version that he finds acceptable.

He chose the art form because unlike traditional pottery productions that relied on a division of labor, the modern ceramic piece is a very personal form of expression that is handled by one individual, he explained.

Now thirty-some years into his career, the ceramicist's celebrated works are characterized by creative contours, natural glazing and an unpretentious solidarity, but Tsai said that he still enjoys producing plain pottery pieces because there will always be uses for regular containers.