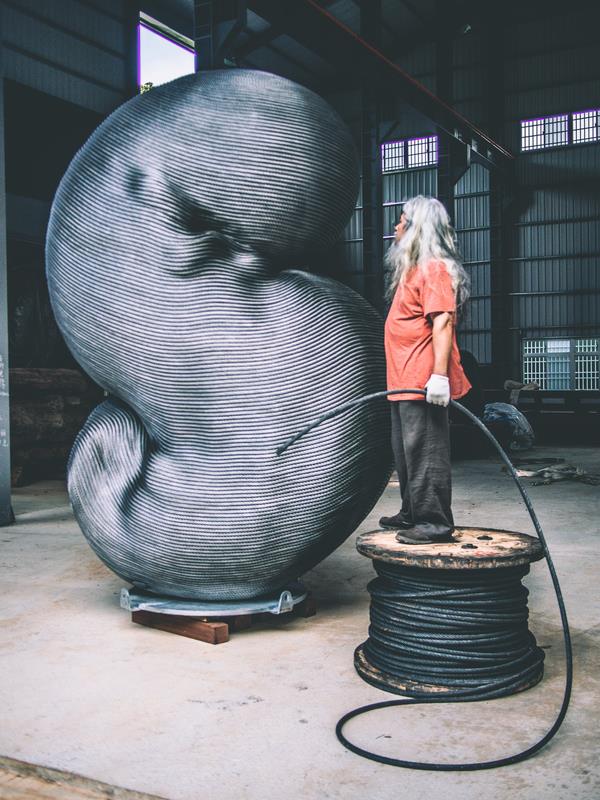 Kang Mu-xiang is a craftsman-turned-artist who transforms the work of nature into works of art. With "life” as a core theme of his creations, Kang has used materials such as driftwood and discarded steel cables to create contemporary sculptures symbolizing rebirth and life. His productions have been collected by museums in the Vatican, Costa Rica, and Panama.

Born into a family of craftsmen, Kang started carving wood at the age of 13. In 1986, he opened a wood-carving studio in Sanyi, a Miaoli township famous for its wood-carving industry. After working for years as a traditional craftsman, Kang felt the need for a personal breakthrough. Thus, he closed the studio in 1991 and traveled to China and South America in seek of new experiences and inspirations.

Kang began his path to becoming an artist in 2002, a year when many trees in Taiwan were uprooted due to typhoons. He stayed in Taiwan's outlying Guishan Island for a year, giving the driftwood that floated across the sea a new life by creating a series of wood sculptures that presented images of babies held by their mothers.

After developing his own style, Kang created more wood and bronze sculptures to convey his ideas about life, nature, and the environment. The artworks have since been showcased in the exhibitions and fairs held in Taipei, Beijing, and Shanghai.

In 2013, Kang transformed the discarded steel cables from Taipei 101's elevators into a large-scale installation art titled "Infinite Life.” Kang noted that the steel cables reminded him of straw hats and baskets woven by his parents, which inspired him to "weave” a sculpture with the cables.

In 2015, Kang helped to strengthen the cultural ties between Taiwan and Germany by creating an artwork as a gift for Karlsruhe, a city in southern Germany, to celebrate its 300th anniversary of establishment. The gift — "Taiwan Ruyi (臺灣如意)” — is a three-meter-high sculpture made of the same material as "Infinite Life.” As a symbol of unity, it is permanently installed at the city center plaza of Karlsruhe.

Kang hopes to connect the five continents just like how he binds steel cables together. With "Infinite Life” in Taipei and "Taiwan Ruyi” in Europe now, his next step is to bring the art of Taiwan to Australia, Africa, and the Americas.