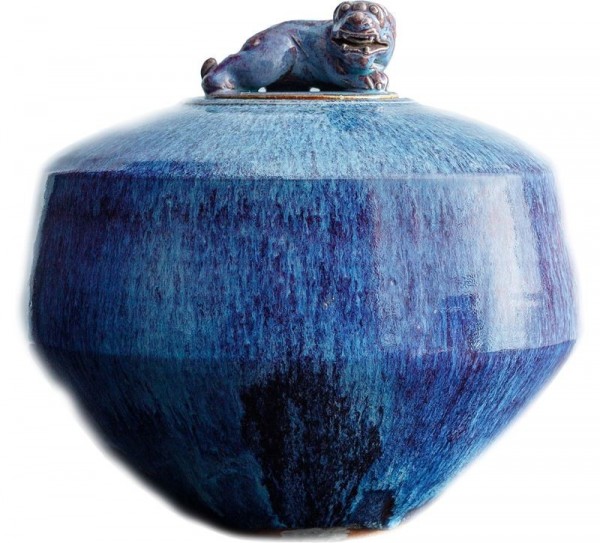 Despite his late start in the ceramics trade, Chang Chi-tao was a quick and intuitive learner who rose to prominence in his own right. He was among the 100 individuals recognized for their artistic merits during the R.O.C. centennial celebrations in 2011, and the recipient of the National Crafts Achievement Awards in 2015.

Chang came to Taiwan in 1949 with other Chinese students in exile, and went on to serve in the military for two decades. He then worked for appliance companies but failed to enjoy the job. It was not until Chang managed a porcelain business did he find his passion in pottery.

He was mentored by the late artist Lin Pao-chia (林葆家), who bestowed all his skills to Chang. He was then invited to teach at university level after his talent attracted the attention of prominent Taiwanese painter-sculptor Yen Shui-long (顏水龍) at an exhibition.

Another significant element of Chang's works is his masterful execution of "cowpea red glaze (美人醉),” literally "drunken beauty,” which is a colored glaze mix of different red and green tones. His skills set in making jun ware (鈞窯), a type of Chinese celadon that is variegated with various vivid hues, is also outstanding.

The deft combination of traditional and contemporary elements of his works is highly unique. Photos of Chang's celebrated works such as "Striving (力爭上游),” "Red and Green Jadeite (紅翡綠翠),” and "Shepherd (牧)” are used as imagery on government posters, postcards, and calendars released worldwide.

In 2007, Chang opened his own studio in Hsinchu County. He also offered lessons at the local elementary school and helped to promote awareness of the crafts industry. He then turned his personal home in New Taipei City into a private museum called "Chi-tao House (繼陶居)” in 2015, hoping to introduce and promote ceramic art to more people.

Though he is in his 80s now, Chang still continues to create works with different glaze experiments, noting that "there are not many days left [for me]. However, I am still working hard to leave a legacy behind.”