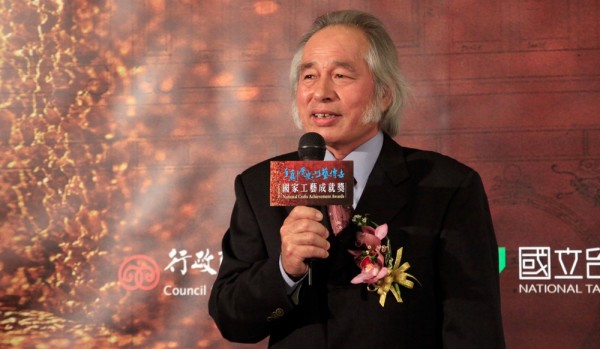 Armed with chisels, gouges and a mallet, Shih Chen-yang has carved quite a name for himself in Taiwan's artisan realm. A professional wood sculptor since the age of 18, Shih established his own operations by the age of 34 and went on to receive the 2009 National Crafts Achievement Award at the age of 64. The Lukang native is not only the master of traditional wood sculpture in Taiwan, he specializes in another unique product - pupils who will one day carry his trade.

Born to an illustrious family of woodcarvers based in Changhua's Lukang Township, Shih grew up immersed in the art of large-scale woodwork, crafting dragon pillars, shrine decorations and temple walls under the instructive eye of his father and mentor, Shih Kuen-yu. He has since participated in many major refurbishment projects around the island, including the Jhenlan Temple in Dajia, the Taichi Enchu Temple in Changhua and the Confucius Temple in Taichung.

After establishing himself as a master sculptor in the scope of traditional Chinese carvings, Shih sought out experts from other artistic realms such as calligraphy and ink painting. It is this blend of visual and literary training that gave rise to one of his most famous pieces - the "Elephantine Flower Casket,” a vase-carrying elephant symbolizing peace and prosperity.

The intricate Camphor wood elephant, an auspicious animal in ancient imperial practices, was selected as a goodwill gift by People First Party Chairman James Soong on his first cross-strait visit to mainland China in 2005.

Now nearing his 70s, Shih is a lecturer at several universities and art institutes in Taiwan. Although the time spent teaching detracts from his creative space, the sculptor-educator believes that the preservation of traditional craft skills is essential to the continuation of the nation's cultural heritage as a whole.