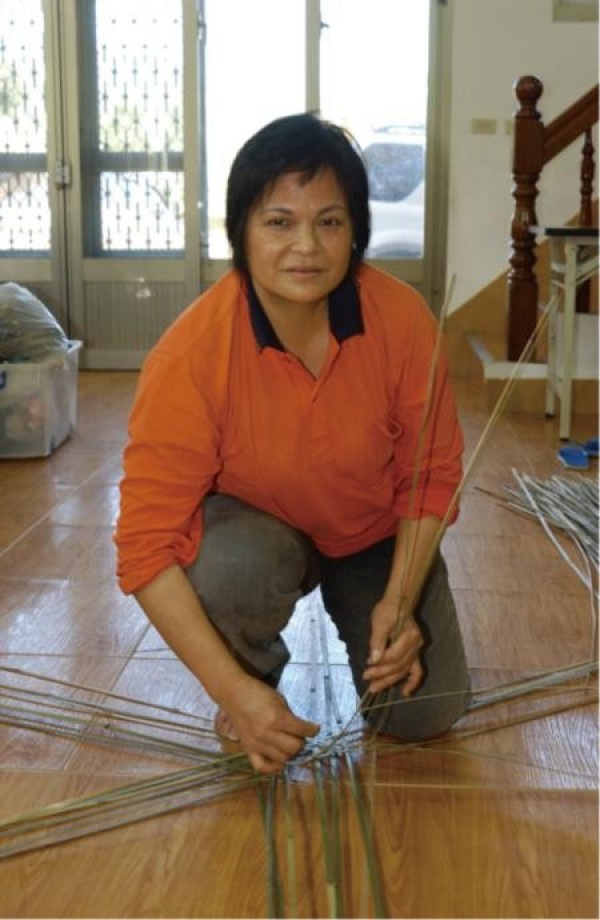 Away Dayen Sawan, a dedicated figure in the realm of indigenous Saisiyat bamboo and rattan weaving, is considered a national cultural treasure for her preservation of such cultural heritage. For travelers to the Miaoli County township of Nanzhuang, she is a must-visit figure and can be found at the Ponglai Workshop (蓬萊工作坊).

Born and raised in a Saisiyat settlement on Mt. Daping, Away remembers how her father worked hard as a bamboo-and-rattan weaver to support his ten children, and how Japanese buyers loved bamboo-and-rattan weavings, particularly those that incorporated aboriginal elements, back in those days.

However, because bamboo can easily slice the human hand open, her father didn’t want his children going into the same line of work, which meant that for years Away’s knowledge of weaving was limited to that basic familiarity. Moreover, once she got married at 16, she not only had to deal with household chores, but also look after both parents and her own children.

In her thirties, she finally got some respite as things quietened down, and she seized the opportunity to participate in community bamboo-and-rattan weaving lessons at the Nanzhuang Township Office held by master weaver Chang Hsien-ping (張憲平). Finally, after so many years, Away was finally able to realize her long-held dream of entering the weaving world.

Over the course of the lessons, Chang was impressed by Away’s diligence, determination, and dedication. Thirsty to learn more, Away would take the first bus out of Nanzhuang each day to work at Chang’s plant at Houlong Township. Thus she spent about a decade learning as she worked, all under Chang’s guidance, her skills growing steadily.

Unfortunately, by the time Away was finally able to master some of the wonders of weaving, her father had already passed away, meaning it was too late for him to pass on many traditional Saisiyat patterns and techniques, much to Away’s dismay.

“Because we traditionally had no written language,” said Away of the challenges of preserving aboriginal culture, “a lot of the most valuable things were passed down orally, which also meant they were easily lost.”

Although she has still been able to learn much from her the woven pieces left behind by her father, she found it difficult to preserve aboriginal culture, traditions, beliefs, and ways of thinking as a whole.

By way of example, she pointed out that “today the children in the village can barely speak the tribal language, their own native tongue, and when we try to get them to, they pronounce it so unpleasantly, which is heartbreaking for us older folks to hear.”

Yet even as the passing of time continues to bring tremendous changes, Away maintains a high degree of respect for nature, which is why she insists on only using bamboo she herself has cut and collected from the mountains.

“Natural bamboo and rattan have a texture and scent that plastics just can’t replace,” she said. For its not just that the techniques of weaving, but also the Saisiyat culture and reverence for the environment, that she truly cares about and hopes for her works to pass on to later generations.