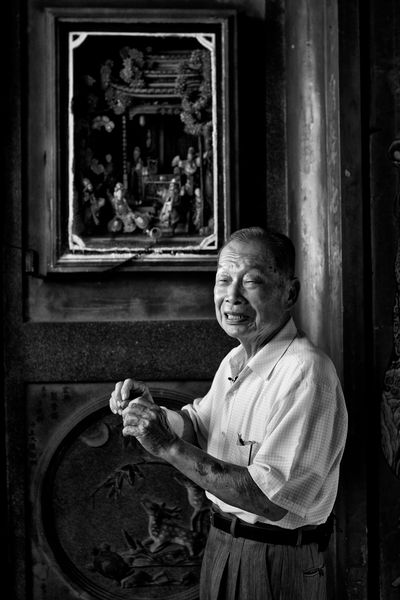 Wang Bao-yuan is a skilled craftsman of the cut-and-paste ceramic art. A student of He Jinlong (何金龍, a cut-and-paste ceramics master from Shantou, China) and the only inheritor of He's specialist techniques, Wang's works are meticulous and detailed, and their immense artistic value has made them among the most admired and breathtaking parts of many temples in his hometown Tainan.

Wang began learning temple art from his father Wang Shi-fa (王石發) in 1947, at the age of 19. In the early days, they took on many commissions to paint private homesteads, through which he developed a keen understanding of oil paints and brush strokes.

As he accrued experience in painting, he gained particular insight into pigments and paint itself, to the extent that when local cement paint manufacturers were producing new paints, they would ask Wang to test them and act as a product consultant.

Under his father's instruction, Wang began learning more delicate work, starting with mid-relief carving and the production of dioramas before moving on to rooftop ceramic ornamentation. "My father had never really done manual labor, so it was only natural he'd start teaching me with the more detailed work. I never did get very good at rough work, so whenever I work with cement I feel like a total layman," Wang recalled.

In the early years there was a shortage of materials, and so cut-and-paste ceramic work was generally done with broken and discarded tiles. After World War II, cut-and-paste craftsmen began asking glassmakers to produce colored-glass orbs that could be used in their work. However, both tiles and glass are time-consuming to work with and have the potential to damage eyesight.

Huge demand for cutting-and-pasting ceramics grew from the large number of temples across Taiwan seeking repairs. Thus lintang, or "drip enamel (淋搪)," was developed around this time, facilitating the quick and large-scale production of molds, setting of colors, and firing of works.

At one point, Wang set up an electric kiln at his home to fire lintang works. "If you want to do fine hammer work, you can only get about seven done a day. And once you're too old, you won't be able to do it anymore," he pointed out.

Wang is a member of the Chaoshan school of cut-and-paste ceramics. This school's compositional layout is layered three-dimensionally, and the poses and expressions of the characters featured are tremendously lifelike.

Wang is particularly renowned for a technique known as jiamao, or "cutting nails and hairs (甲毛)," which involves cutting glass into matchstick thinness or crescent-moon shapes. He is equally skilled in utilizing a rich variety of glaze patterns seen on early porcelain dishes, carefully cut curves, and delicately detailed pasting.

The production process demands substantial study of the materials and tools involved, and so to help preserve the special skills and knowledge needed for the craft, in 2011, the Council of Cultural Affairs (now the Ministry of Culture) designated Wang as a cultural heritage preserver of the cut-and-paste ceramic art.

Not only does he still complete a new piece of work every year, he still holds regular workshops with support from the Tainan City Government to pass down his crafts.