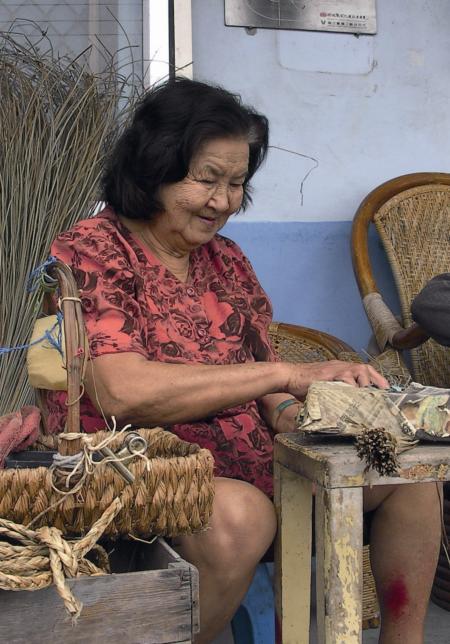 Growing up in Taichung's Qingshui Township, a young Lin Huang-chiao often watched the people of her village nimbly weave hats and other common items from rush. When she turned 52, she decided she wanted to take up that same craft to help pass the time. With no formal training or teacher, she nonetheless began turning out pieces that amazed the art world, earning her acclaim as a master outsider artist.

In 1954, Lin moved with her husband to Taitung, where she learned the farming methods of the Amis and Paiwan peoples. Upon retiring from the fields at the age of 52, she opened a restaurant in Taitung, where she would close for two hours after serving lunch, and use that time to go buy clay, wool, and rush and work on her handicrafts. When she finished a piece, she would hang it in the restaurant. Diners who saw her exquisite craftsmanship were astonished, and one lady even approached Lin with the intent of purchase.

"They're just the work of an old lady who couldn't bear sitting around with nothing to do. I usually just name a price that'll earn me a little money to cover the materials cost," Lin would reply.

One day, the Taitung County magistrate visited Lin's restaurant for some coffee and saw her woven work. Amazed, he remarked: "You shouldn’t be selling this kind of olden weaving, you should put it on exhibition at our cultural center!" Not having any idea what he meant by an "exhibition," Lin set about making 100 pieces to meet his request regardless.

Lin has a pair of talented eyes, which lets her skillfully weave up almost anything she sees, from the insects and beasts living in the countryside to the Chinese zodiac creatures and the "24 filial exemplars" from books and almanacs. Her works reproducing the 12 animals of the Chinese zodiac even won her a commendation in the Handicraft Category at the 51st Provincial Art Exhibition in 1997.

When asked how she can produce such detailed weavings of things like dragon boats and their rowers, she straightforwardly responds, "By watching TV!" Which is quite a feat, as her work is intricately detailed.

For example, the dragon head of the boat, with its mouth wide open, is even adorned with eyes, whiskers, teeth, and horns. The flag catcher is confidently astride the dragon’s neck, while the drummer faces the paddlers, pounding out a powerful beat as they drive the boat onward. At the back, the steerer mans the rudder, and tied to the dragon’s tail is the traditional zongzi, or bamboo-wrapped rice dumpling, in memory of the classic poet Qu Yuan.

The whole piece vibrantly captures the spirit of teamwork and cooperation that characterizes dragon boat races. "I even managed to draw blood working on that dragon boat, but I just taped my hands up and kept at it for another few days!"

Having spent most of her adult life as a farmer, Lin has a deep, unbreakable bond with the land. Her works often draw on her life experiences, such as her "Farming Village Quartet," which depicts early rural rice cultivation. From left to right, it shows tilling the soil, filling it in, sowing the seeds, and harvesting the rice. It truly calls to mind the words of the old poem, "Pity the Peasants":

He heaves his hoe in the rice-field, under the noonday sun,

Onto the soil of the rice-field, his streaming sweat beads run.

Ah, do you or don't you know it? That bowl of rice we eat:

Each grain, each ev'ry granule, the fruit of his labor done.

Lin's works largely focus on the everyday, and to present the beauty in that, she has had to tolerate the pain of cut hands and pricked flesh. Truly, these spectacular pieces of handicraft could be said to present in both form and production the very essence of Taiwanese traditional culture.