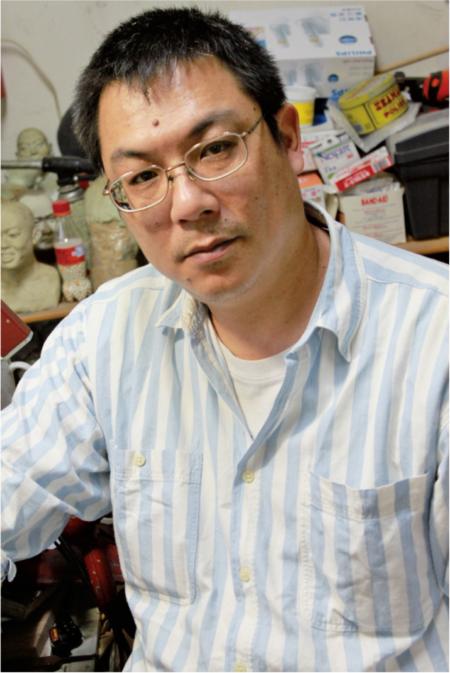 Just how different really are the butcher's knife and the craftsman's blade? How does a butcher become an artist? For most people, these things represent parallel lines that would never intersect, but Duan An-guo has shown that where there's a will, there’s a way.

Duan was never much of a student, dropping out from vocational school to join the military after finding school too tedious. There he met all kinds of people, observed how they acted and talked, and learned how to "read" people, which laid the foundations for his people-focused creative endeavors to come.

After leaving the military and getting married, Duan found himself without a useful profession and so took over his dad's beef stand at the local market. There he continued his people-watching, something that he says with a laugh that he enjoyed much more than selling meat. "I was great at cutting the meat up," he says, "but not so much at the selling, so I began wondering what was I even doing in that job." One day, he went with his wife to a flower show at the World Trade Center, where some leather sculpture on show caught his eye. As he looked closely at it, he realized that this was something he could definitely do.

This accidental discovery started Duan on a journey into the depths of leather sculpture. With no formal training in art, he fumbled and found his own way through experimentation. "Honestly, it's a lot like anything else, you just have to find a way and everything will come together." Working on his creative experiments as a sideline to his beef selling, Duan soon found his craftwork skills sufficiently honed to allow him to focus fully on his new art. With his lifelike imagery sculpted from leather, Duan has won top prizes at leather art shows in Japan and the US.

Currently, his creative work draws upon a sense of nostalgia for the people and lifestyles of the past. In his eyes, the previous generation had a simpler way of life that was more comfortable than the anxiety and utilitarianism of modern society, and through his works, he hopes to remind people to slow down and think about the leisure times they've missed.

When asked what the most difficult part of leather sculpting is, Duan answered that it's the expressions on people's faces. Expressions are so variable that one has to really work to capture them right, otherwise a slight smile can turn into a smirk, and laughter into crying, he wryly said.

Duan's life is an illustration of how to play the cards that life deals out, and he makes a point to tell the younger generation that it doesn't matter where one is now, because if one can find his or her passion and develop it, an entire new path lies ahead.