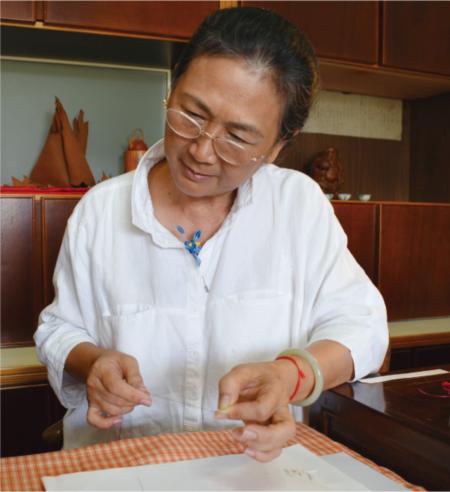 Chen Hui-mei had been involved in making and teaching leatherwork for more than 20 years when, several years ago, she happened to bump into "Aunty" Hsieh-Chen Aiyu (謝陳愛玉). Through her, Chen discovered the relatively underappreciated art of silk-wrapped flowers, which she describes as having been "an amazing art with dim prospects and outstanding teachers with no-one to pass their skills on to." Moved by this unfortunate situation, she began her own explorations of the world of silk-wrapped flowers.

This is a traditional art for both the Hakka and Hoklo communities, with the latter generally using silk-wrapped flowers for hairpins or corsages at weddings and coming-of-age ceremonies, while the former most often use them in ceremonial offerings. According to Chen, "Hoklo flowers are made with a bigger range of techniques, but the Hakka ones use more colors and sizes." As time has marched on and industrial society developed, these silk flowers have unfortunately been replaced by sponge and plastic ones, losing their market and commercial value.

Chen has dedicated years to combining this traditional craft with modern cultural elements to help them become part of contemporary life and keep pace with the times. People generally think of silk-wrapped flowers as traditional items used just for special events like weddings or festivals, but Chen creates flowers of a variety of styles suitable for much more than just that. They can pair just as easily with everyday clothing as with a fancy qipao, naturally blending in with daily life.

Always conscious of the origins of the art, Chen makes sure to have her students start practicing with the traditional red flowers. "That's the absolute foundation, and the first thing Aunty Aiyu teaches," she says. She adds that she feels that playing with colors can lead people to mess up if they don't have a stable foundation, and as a result, they could lose the chance to really understand the skills involved in flower-wrapping. Upon cinching that foundation, though, one can then follow a new approach and develop one's own style.

Now, Taiwanese silk-wrapped flowers are slowly becoming a common sight at creative markets. Those initial efforts are finally blossoming and bearing fruit. Many of Chen's own students have gone out and started their own classes, helping spread the art and make a growing number of people aware of its contemporary potential. Despite being one of the fountainheads of this renewal, Chen remains humble and says that this new blooming of silk-wrapped flowers is all thanks to Aunty Aiyu.