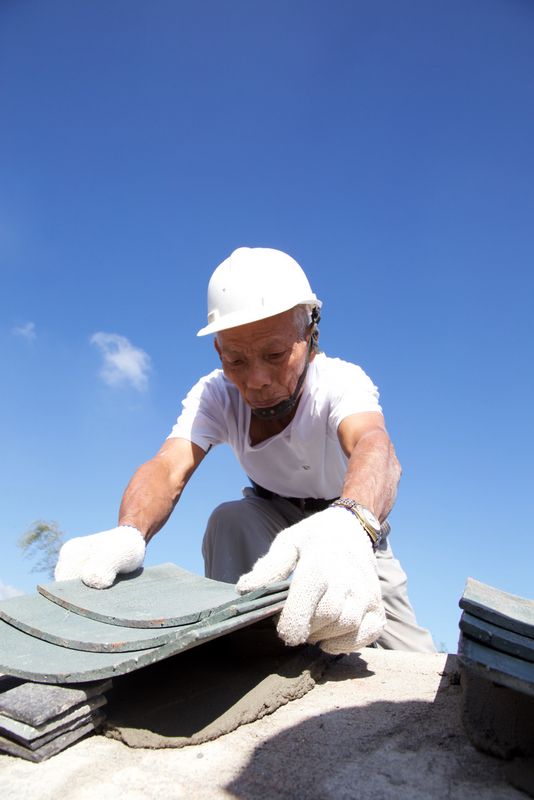 Liao Wen-mi began his career by learning from his father-in-law Peng You-chang (彭由昌), developing talent with cement work, with a particular focus on the rooftop ridges and tilework of traditional homes and temples. He adheres to the traditional elements of the craft, with an understanding of the traditional size taboos, a familiarity with the particular qualities of tiling from different places, and how to plan things in line with traditional considerations like the five elements and yin-yang.

In an era when most apprentices were aged 13 or 14, 16 at the oldest, Liao was a relatively late starter down the road of tilework. Initially a farmer, after three years of marriage the 25-year-old Liao began doing odd handyman jobs under his father-in-law, reaching comparable levels in skill after a few years of apprenticeship.

Liao began taking on jobs on traditional sanheyuan homes, mostly in Taoyuan, and in the decades since, he has worked on around 100 of them. In his 30s, he began working on temple structures, focusing on their construction from his 40s. Traveling all over Taiwan, he got involved with both cement and tile work, taking part in the building or renovating of no fewer than 200 temples.

Since starting out at 25, this kind of construction work has been his life. Some 30-plus years ago, he was invited to Sakado City in Saitama Prefecture, Japan, to be part of the cement and tile work on Seitenkyū, a Taiwanese-style Taoist temple dedicated to the "Three Pure Ones" which has become a major tourist attraction in the area.

That same year, the Ministry of Culture added "traditional masonry" as a recognized cultural heritage skill, covering two styles. The first of these is traditional Han architectural work, from site preparation and foundation laying through the building of walls and windows to tile work.

The other is modern Japanese-style architecture, covering not only the same steps as the Han style, but also stone washing and related skills like the use of cement and plaster. These skills remain indispensable today in the repair and preservation of tangible cultural heritage like historic sites, buildings, and settlements.

The tile work done on roofing is the hardest part of the work, with only a few of these national treasures and their apprentices left. In coordination with the Cultural Heritage Preservation Act, these remaining living national treasures will be offering four-year courses to pass on their skills in hopes of fostering a new generation of talented craftspeople.