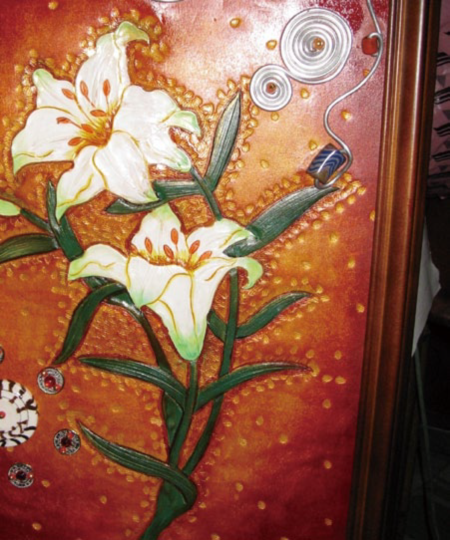 The Dolabalas Leather Carving Studio was established in July 2002, and over her nearly two decades of work in leathercrafting, studio founder Tjuku has transformed the traditional symbols of her Paiwan people into beautiful adornments for her leatherwork, creating products that are simultaneously practical and rich with cultural meaning.

Tjuku initially followed in her older brother's footsteps and entered the construction industry. When a work accident took her brother's life, the grief and mental chaos wrought meant she had to leave the job in the middle of a project. She shifted focus, studying plumbing and electrical work, becoming a plumbing and electrical wiring designer. Just as her new career was getting on track, her eldest daughter was diagnosed with cancer. Tjuku spent the next two years with her daughter day and night as she fought for life, but ultimately it was a losing battle. It was during the sorrow-filled days after that loss that the Lord introduced her to leatherworking.

Tjuku firmly believes that God opened a door for her and guided her out of the darkness. She joined a government-run sustainable employment skills program where she started learning leatherworking, investing her all into it and graduating with honors. She went on to start her own studio, throwing herself even more madly into her work. Spending some 16 hours a day on leather carving, she accumulated a bulk of outstanding works and began to earn a reputation for her distinctively indigenous leather goods.

The most distinguishing characteristic of Tjuku's work is the use of Paiwan symbols — millet and grain, symbolizing an abundant harvest; mountain hawk-eagle feathers and glass beads, symbols of wealth and status; and lilies, symbolizing the purity of women and the heroism of men. The spread of her studio's works around the market helped expose more and more people to indigenous culture.

She believes that the addition of a cultural element to her products not only gives them a narrative aspect, but even more importantly, gives them life, enabling them to speak directly to the hearts of people. This is why she insists on using these symbols from the Paiwan culture of which she is so proud.

In 2009, the flooding in the wake of Typhoon Morakot caused severe damage to the mountains of Kaohsiung and Pingtung. Seeing her people suffering so, Tjuku wanted to find a way to share the grace God had shown her with them. The following year, the Dolabalas Leather Carving Studio joined a crafts project offering community support, not only developing a number of new products, but also starting leather-carving classes to help teach those impacted by the floods a new skill that they could use to get back on their feet.

The Dolabalas Leather Carving Studio was born out of grief, but Tjuku has used her creative work to process that grief. Her gratefulness for the gift of life has become the driving force of her art, and every piece she creates radiates this feeling.