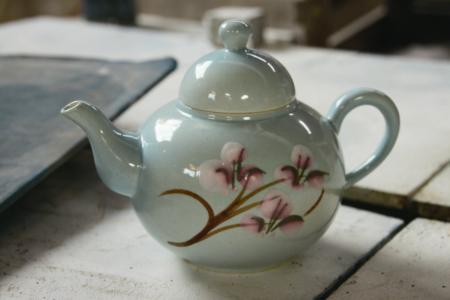 Sixty years ago in Yingge District, more than 20 to 30 factories were firing up these porcelain bowls and dishes with plum blossom decorations. Huang emphasized that the glaze used is raw glaze, meaning glaze or paint that has not been fired up before, and it is a complex process to create from scratch because of the many variables and chemical interactions between the raw materials and their different effects on the glaze.

The red, green, and brown colors used for the plum flower decorations require different colorants and opacifiers like iron oxide, tin oxide, or chromium oxide. The three colors that define this unique Yingge style are based on different glaze formulas that are then layered to make the plum blossoms come to life.

The plum blossom style is a unique regional specialty, as it represents the beauty of Yingge's traditional heritage and its industrial history. However, as the glaze has to be made from scratch, the specific knowledge was not passed onto the next generations, and the glaze formula was eventually lost. For the last 30 years, no kilns in Yingge have fired up plum blossom-decorated porcelain bowls and plates, and the only ones remaining were from before.

In favor of reviving Yingge's ceramic culture and unique historical elements, the New Taipei City Yingge Ceramics Museum began holding ceramic competitions in 2008 to raise awareness of traditional craftsmanship skills unique to Yingge. Using the competition opportunity as a driving force, Huang set out to recover the lost plum blossom decoration technique. He succeeded, and has since been promoting this style with the help of Yinggestone Culture Association.

Some of the association's promotional strategies include combining tailor-made plum blossom-decorated tableware with Yingge local specialty dishes and restaurants. For example, the well-known Yingge Grandma tofu pudding is served in a porcelain bowl painted with plum blossom decorations, and guests can take the bowl back home as a souvenir after eating the delicious dessert.

Another example is the plum blossom lunch box designed by the Yingge Ceramics Museum's restaurant, featuring a celadon bottom and a Taiwan-shaped bento cover. On the cover, Yingge's location is marked with a plum flower to represent the birthplace of the plum blossom style. Such collaborations will offer tourists the opportunity to learn about Yingge's ceramics while enjoying Yingge's specialty dishes.