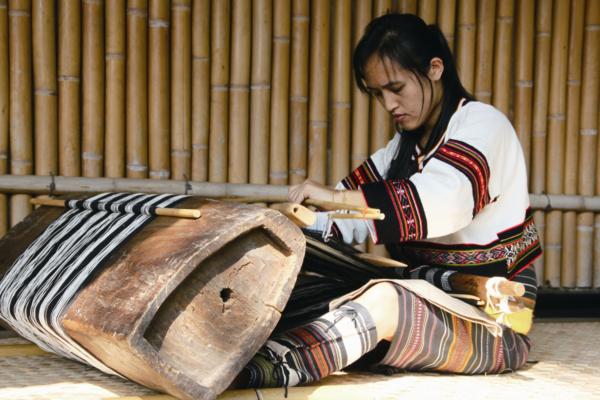 The Mepuwal tribe, an Atayal settlement located next to the upper Daan River adjacent to Xiangbi Mountain, has been rebuilding traditional weaving culture in recent years, with villagers also planting ramie and other plants on nearby slopes for textile use and natural dyes.

This movement is spearheaded by Lihang Workshop to actively preserve Atayal traditional weaving skills, while adding modern approaches and integrating the ancient craft with other practices. The end goal is to reinvigorate and restore the cultural heritage of the Atayal people.

With support from the National Taiwan Craft Research and Development Institute's (NTCRI) promotion of traditional crafts, members of both the tribe and the workshop have accumulated new skills and flourished.

In the first stage, the workshop focused on preparing training resources and equipment, as well as collecting traditional fabric knowledge and materials, while also recruiting tribe members to re-learn their traditional weaving skills.

The second stage focused on the advancement of professional skills and cultural knowledge, as well as the classification and establishment of a digital database on traditional dyeing elements and weaving techniques and processes.

Together with the Miaoli County Indigenous Arts and Crafts Association, Lihang Workshop continues to combine weaving skills and traditional cultural elements accumulated through the generations with more modernized crafts including fashion, metalwork and jewelry, home décor, and fiber arts.

Weaving holds deeply significant meaning in the life's journey of an Atayal woman, from birth to death. Traditional weaving cloth is shaped as a circle, similar to the lifecycle of an Atayal woman. The cycle begins at birth, when a young Atayal girl is given a swaddling cloth hand-woven by her grandmother.

Then at the age of 12, the little girl will begin learning to weave her own skirts, and eventually, her own bridal dress when she gets married. She shall continue to weave for her husband and children as they grow old, and before the end of her life, she will weave her own burial shroud.

Through the refinement of traditional cultural values incorporated with modern design concepts, an age-old Atayal skills set can be transformed into new lifestyle products with both cultural depth and contemporary value.