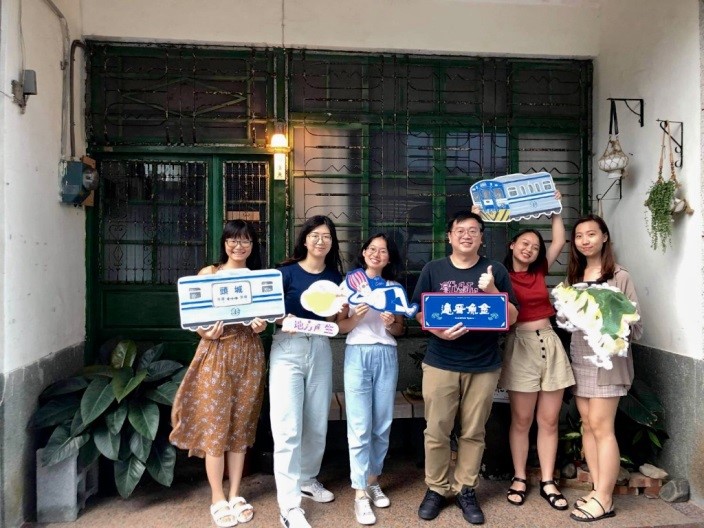 Name: 金魚厝邊
Year of Establishment: 2015
Located At: Toucheng, Yilan County, Taiwan
Founder: Peng Ren-hong (彭仁鴻)
Did You Know That...?
Toucheng is a township with a small population of 29,000 in Yilan County, northeastern Taiwan. Among the residents, only 9000 are aged between 15 to 40, and one out of every six is over 65 years old. The proportion of the elderly population in Toucheng is higher than the average in Taiwan. Due to the attraction of big cities, many people there have chosen to migrate to the city, thus causing a rapid decline of population and dwindling of the township's vitality. Like most young adults, Peng Ren-Hong left his hometown when he was in high school. Several years later, while he was serving as a substitute civilian serviceman in the military, he returned to his hometown hoping to reinvigorate Toucheng, the first township developed in Yilan County in late 18th century.


Born in 1986 in Toucheng, Yilan County, Peng Ren-Hong (彭仁鴻) graduated from the Department of History at National Taiwan University (NTU) and obtained his Master's degree later at Institute of Service Science of National Tsing Hua University (NTHU). Upon graduation, he learned that the National Chengchi University (NCCU) had a three-year plan to rejuvenate Yilan's regional intellectual capital. He wrote a report to the professor-in-charge and applied to return to Yilan as a research and development substitute serviceman, to work in line with Yilan County government and students from NCCU. Initially, his report was criticized by the professor, saying that the content in his report seems to be written by someone who is a "metropolitan elite" - which is a stereotype of people who lived in large cities and do not understand the problems and views of other people living in other places.

The comment that he received from the professor motivated him to start his journey on rebuilding his knowledge about his hometown. Peng participated in a training course for community planners at I-Lan Community University. After the six-month training, he co-held an event "Toucheng Cultural Experience (頭城文化體驗)" with other planners. The event was a success and it attracted more than 50 residents to participate. To achieve his ultimate goal of revitalizing the town, he sacrificed his break-time and weekends to work on the rejuvenating and development project. In 2014, he successfully applied and received a subsidy for community development from the Ministry of Culture, under the "Youth Go! Village Cultural Development Project (文化部青年村落計畫)."

Implementation of the reinvigorating plan for Toucheng officially began when he learned that the residence of former magistrate Chiu Jin-yu (邱金魚) would be demolished to make way for parking spaces, and in order to save the 60-year-old house and preserve the legacy, he decided to rent the house for his social practice of reinvigorating the town, turning it into an exhibition hall and building a co-working space for young people to collect information of local culture and arts. He named the venue "Goldfish Space (金魚厝邊)," after former magistrate Chiu Jin-yu (邱金魚). It is now divided into two sections, with a variety of historical objects and works by international and local artists on display.

In an interview, he shared that it was not an easy start when he first returned to his hometown. Some residents did not think that he would succeed and presumed that he might leave Toucheng again in future. However, he believed that it took time to build trust and he needed to persevere and be patient with the results. In order to build Toucheng into a place where young people are willing to return to work, he realized that, the first step was to cooperate with the elders in the area and make connections.

Peng"s plan to reconstruct the community was different from many others, who would follow the fundamental elements of design – Point to Line and Plane, which is to start from a point and slowly develop outwards to achieve their final design structure. Peng did the opposite; he wanted to have a comprehensive understanding on the past experiences, development works that were done by the county government, and also to find out the relationship between stakeholders.

In 2017, Peng organized the first "Toucheng Old Street Arts and Culture Festival (頭城老街文化藝術季)," with the theme "Touching Toucheng / The Way We Live." It was important for him to make connections and leverage external resources due to the lack of funding and resources. He made use of the concept which he learned in NTHU - Minimum Viable Product, which is a development technique in which a version of a product with just enough features usable by early customers is produced, and the feedbacks provided will be used for future product development.

Currently, Peng is not only a practitioner of cultural preservation, he also conducts university lectures, encouraging young adults to return to their hometown to work. To spur on local creations, a town needs a lot of talents and ability to integrate different professions. This is the main purpose of "Goldfish Space," which has been in Yilan for some years to promote the preservation of culture and local creations.

Peng decided to start promoting by giving lectures, sharing his team's work in rejuvenating Toucheng and introducing the town’s art festival and places of interests. His goal is to inspire the younger generations to be acquainted with their hometown's cultural and historical past and to encourage them to participate. He hopes to create a sustainable ecological cycle of "hometown," so that eventually, the young generations will stay and appreciate the uniqueness of their hometown, which is something that cannot be replaced. Over the years, Toucheng has seen a marked increase in tourism. Many international artists were also attracted to Toucheng to appreciate the town’s traditional culture and arts.