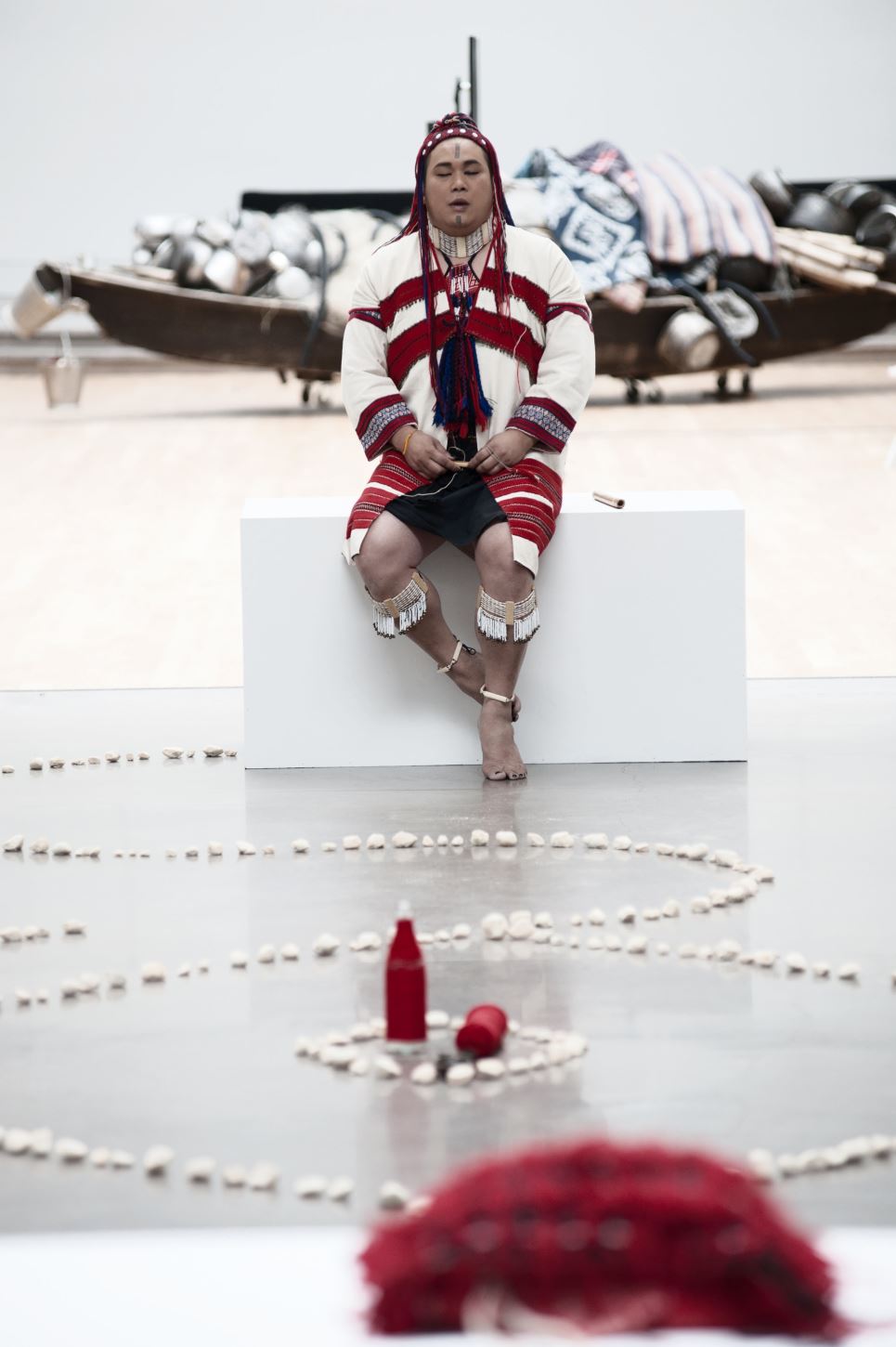 ‧ Chinese name: 兒路創作藝術工寮 | 東冬侯溫
‧ Established: 2015
‧ Location: Tongmen Village, Xiulin Township, Hualien
‧ Did You Know? To pass on traditional indigenous culture, Dondon Houmwm established Elug Art Corner in 2015. “Elug” means “road” in the indigenous Truku language. The name was chosen for its symbolism, representing how the people should follow the path set by their ancestors toward the future without fear.

Artist Dondon Houmwm hails from the Hualien County indigenous Truku community of Dowmung (Tongmen in Mandarin), where he grew up with his grandparents. As a child, he would play in the mountain forests and listen to his grandmother tell the tales of the tribe, things that became cherished childhood memories for him. Then, after ninth grade, Dondon Houmwm moved to Taipei for senior high. He enrolled in a special class focused on indigenous arts, through which he learned indigenous dance. After graduating, he joined U-Theatre, taking part in theatrical performances and laying the foundations for a career in performance art.

At no point in his time living in the metropolis of Taipei did Dondon Houmwm ever begin to lose the sense of his indigenous identity. He recalls the first time he wore traditional tribal clothing, participating in a joint celebration with other communities of Mgay Bari, the ancestral spirits festival. It was then his grandmother explained to him that everyone there was Truku, and from that, he came to realize there was something different about him compared with “mainstream” Taiwan. For Dondon Houmwm, that sense of identity has become natural, an inherent part of himself.

With artistic performance being a very case-by-case line of work, it can be a feast-or-famine way to get by. After completing his national service, Dondon Houmwm took on work as an administrator with the Ketagalan Cultural Center, taking part in performances on a part-time basis in the weekends. This way, he managed to bring in a steady and comfortable income of some NT$50-60,000 a month, but deep down, his artist’s soul continually ate away at him. By chance, Dondon Houmwm came across the Indigenous Artist-in-Residence Program for Local Employment, which opened up an opportunity for him to return to his hometown and engage in creative work.

As a lecturer at National Taiwan University of Science and Technology (NTUST), Dondon Houmwm takes students back to the community to create; the young students’ eagerness to learn from tradition and their passion to create are in line with his philosophy. He recruited a group of indigenous youths from the Atayal, Paiwan, and Truku peoples to establish the Elug Art Corner in 2015, bringing his team to Hualien to set down roots. “Elug” means “road” in the indigenous Truku language. The name was chosen for its symbolism, representing how we should follow the path set by our ancestors toward the future without fear, says Dondon Houmwm.

Dondon Houmwm has said that the difficulties indigenous artists face with their communities is also the force that inspires them to create. Dondon Houmwm’s decision to take those young people back to his homeland and start Elug Art Corner may seem brave and romantic, but if you want to make a living in an indigenous community, you also need to find a way to help that community continue living.

Dondon Houmwm believes that it should all start from the ancestral languages, and that the meanings and ideas that those languages can communicate cannot be fully expressed in Mandarin, English, or any other language. To that end, he takes young artists on visits to tribal elders to interview them and collect and record traditional songs, which they then take back to the center to practice and re-score. Elug Art Corner combines traditional indigenous songs with accompaniment by traditional instruments like mouth harps, transforming ritual, music, and dance from tradition into environmental theater. They have been invited to perform around the country, helping indigenous communities commune with the ancestors and pay for blessings. Each summer, they hold the Mountain Valley Music Festival, attracting thousands to come watch performances by a rich array of indigenous musicians.

Unable to bear seeing the last longhouse from Dowmung disappear, the young people of Elug learned from the tribal elders and built it back using traditional materials. After completing the longhouse in October 2019, they held workshops on rattan weaving and bow weaving. The participants learned to handle yellow rattan from the elders of the tribe and made drying racks, which can be used for drying dishes or cloth, as well as being able to be used as display racks for ornaments when placed flat. Through this, the team were able to help the wisdom of the ancestors continue to be passed down.

Through workshops, people come to the community to learn traditional crafts, and Elug also holds “Phpah” art gatherings to bring artists and craftspeople to indigenous communities. “Phpah” means “flower” in the Truku language, but Dondon Houmwm has given it a more poetic interpretation—blossoming life. Through artists’ residencies, they are able to learn about the history and crafts of the community, each side reinterpreting and reinvigorating the other, helping traditional culture become part of our lives in novel ways.

“Elug is constantly experimenting with ways to survive and thrive harmoniously with the community,” says Dondon Houmwm. He hopes that Elug Art Corner can become a platform for communicating and transmitting indigenous crafts, history, rituals, and identity through a variety of forms, as well as for passing on the soul and spirit of the tribes through the vigor of youth.