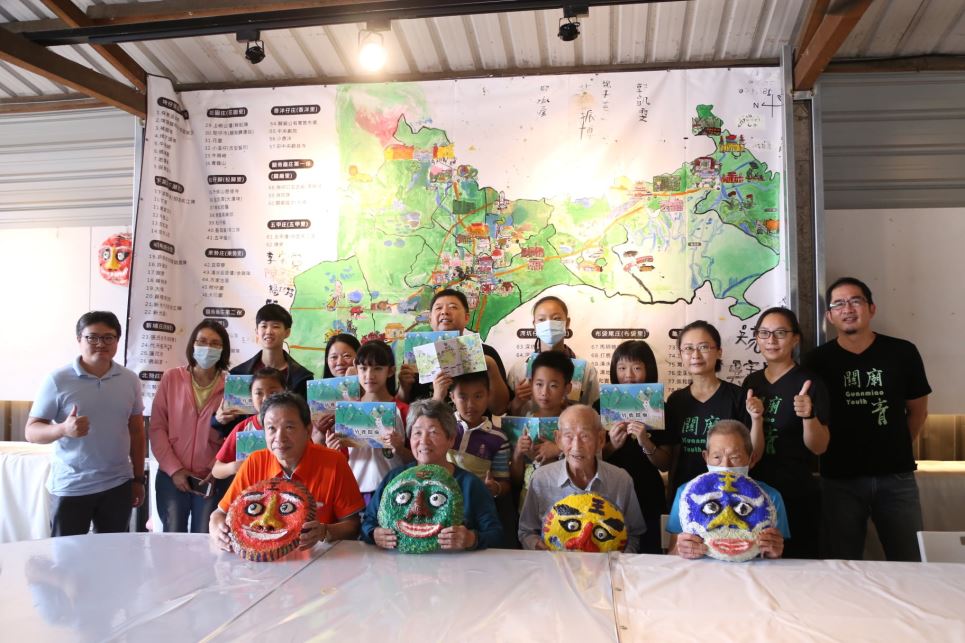 ‧ Chinese Name: 一朵花文創工作室｜許玓維
‧ Date of Birth: September 18, 1984
‧ Place of Birth: Tainan, Taiwan
Did You Know?
In 2012, Hsu Ti-wei established the Cultural Flora Studio with a mission to "touch people's hearts through the power of small changes." The studio is committed to the culture of Song Jiang Battle Array face painting and the creation of pineapple fiber crafts, using hand-drawn illustrations and records from fieldwork done in Tainan's Guanmiao area to teach and spread these cultural elements.

Known as "the flower of Guanmiao," Hsu Ti-wei’s family used to run a lace dyeing workshop, through which she became familiar with lace dyeing and developed a passion for handicraft and dyeing. As a student of Ethnic Relations and Cultures at Hualien’s National Dong Hwa University, she often visited indigenous villages and was exposed to indigenous weaving crafts. She became fascinated with their plant dyeing techniques and decided to pursue this as a line of work. On top of this, during her sophomore year, she took part in a cultural event unique to her hometown, the Song Jiang Battle Array, where she painted the performers’ faces. This experience inspired her to preserve this local folk art, and so she began her work on a project to preserve the face-painting styles of the Song Jiang Battle Array, through the program of National Science Council.

After graduation, she worked in Taipei on preserving tangible cultural heritage, and this experience made Hsu even more eager to preserve her hometown’s culture. Thus, in 2010, she returned to Pitou Community in Guanmiao, Tainan, and served as the director-general of the Community Development Association, building community unity and integrating plant dyeing to create cultural and creative goods like fabrics with beaten surface patterns to showcase local culture.

Hsu had learned in college that pineapple fiber had been used to make paper in Taiwan during the Japanese era, and there were even trading records from the Qing Dynasty that mentioned it. However, there was a dearth of historical literature or resources on the actual processes. As a result, she had to look online for foreign information and figure out the process, from raw material selection and production to product design from scratch to resurrect the pineapple fiber weaving industry.

In 2016, she founded the Pineapple Fiber Dyeing Workshop, receiving funding from the Ministry of Culture to revive the Japanese-era art of collecting pineapple fibers, using a spoon-like apparatus to scrape the waterproof layer from the surface of pineapple leaves, remove the inner fibers, wash them, dry them, and then twist them into yarn for use as a textile material. The items Hsu creates prom plant materials may seem ordinary, but because they can only be made by hand, they have a warmth that is not found in mass-produced items, as well as being a source of cultural memory and emotion.

This ancient craft is not only a complicated process, but also has limited efficacy in terms of thread collection, as the fibers from one pineapple leaf can only be twisted into about a meter of thread. However, this craft has a lot of potential for development. Through Hsu’s promotion work, various manufacturers in the industry have chosen to start experimenting with their choice of raw materials in recent years.

In 2021, she received support from the Soil and Water Conservation Bureau’s 2021 Youth Returning Home Program to continue to keep the craft of pineapple fiber weaving alive, which was a welcome sign so that the pineapple fiber skill can be sustained, which was, for Hsu, a welcome moment of getting something back for all she had given over the previous five years.

The help call the attention of the youth to the culture of Guanmiao, in 2016, she established a dedicated Facebook group, followed by a non-profit organization, the Tainan Guanmiao Youth Cultural Association, in 2020. Through the association, she launched a project called “Bamboo Deer Guanmiao—A Picture Book on the Ancient Placenames of Guanmiao,” conducting a survey of the ancient placenames of the region to teach children about its history and events through a picture book.

In the course of her ten years of work, Hsu spent almost four years scraping by on barely a few thousand New Taiwan Dollars a month, but even that did nothing to quell her determination. On the contrary, it made her all the more driven to put resources to use on valuable, constructive activities. Through her efforts, Hsu has transformed local culture, spearheading actions that bring together the community. From Song Jiang Battle Array to pineapple fiber weaving and plant dyeing, and even an ecological survey of the Yanshui River, she remains as driven as ever to keep the local culture alive and create an environment friendly to its future.