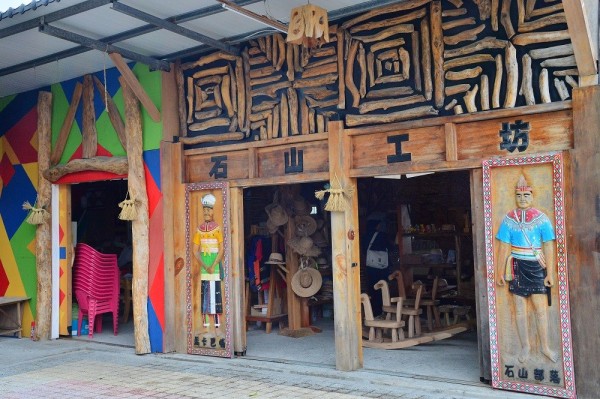 "Kakawasan,” which refers to "ancestral gathering place” in the Amis language, is an Amis community established during the Japanese colonial era. Surrounded by nature, the main income source used to be vessels made from shell ginger; however, material acquisition became difficult while farmable land decreased following urban development. The community soon faced the issues of losing its members and traditions.

To preserve traditional Amis culture, promote local industries, and encourage young people to return to the tribe, the community established the association and started deepening Amis culture from different aspects.

As craftsmanship is a valuable intangible cultural heritage of the Amis, the association established the Shih Shan Workshop for passing on techniques of weaving and carpentering. In addition to Amis techniques, the workshop also integrated shell ginger with the Japanese weaving technique of Shimenawa to create creative products such as hats, Shimenawa sacred ropes, and handbags.

The workshop also transformed post-typhoon driftwood into artworks and lively objects such as wooden horses, tables, and chairs. Products created by the workshop are sold in nearby tourist spots including Tiehua Rural Village, East Coast Creative Market, and Douliang Railway Station.

Moreover, the association collaborates with local weavers to combine different materials with Amis colors and traditional patterns to create a style unique to the community. It also invites professional craft artists to offer instructions on developing new products while visiting different workshops to learn new knowledge and ideas.

In terms of upgrading the community environment, the association has formed a group that is responsible for enhancing available space and structures. The group takes inventories of abandoned buildings, spaces, and public facilities within the community, and provides suggestions for spatial and environmental improvement.

In addition, a tribal journal has also been created to document the history of the settlement as well as record oral traditions and images for the younger generation to learn about the history and culture of the community. In the future, the association hopes to revitalize wetland resources from the Beinan River estuary and turn the community into an eco-art village.