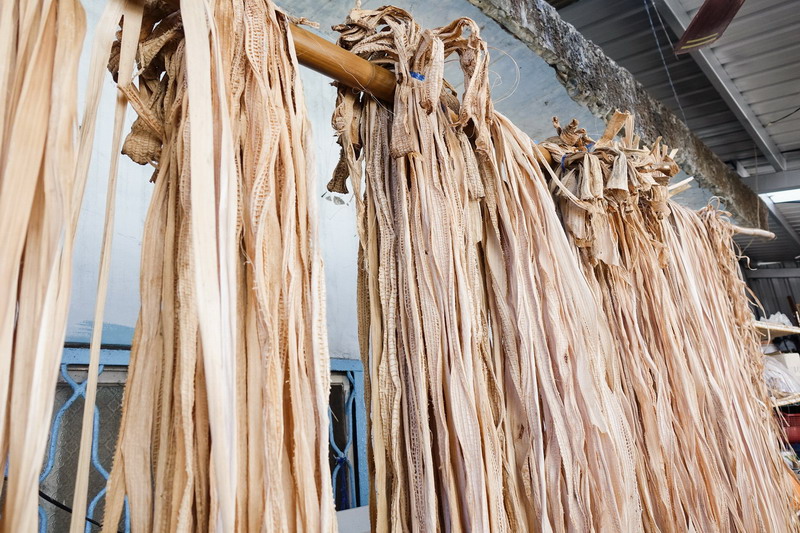 Traveling down the Huadong Highway to Fengbin Township in Hualien, one will eventually reach the village of Paterungan, the largest village of the "wandering tribe" — the Kavalan people. Here stands a small building that the locals call "Lala Ban," which houses a one-of-a-kind workshop where they weave with thread made from banana plants. This place has a deep symbolic meaning to the Kavalan, as it is not only helping revitalized a traditional craft, but also giving members of the tribe a hands-on way to reconnect with their heritage.

This tale starts in 1878. The Qing dynasty was busily working on land development and "pacifying" the indigenous peoples of Taiwan, which saw several clashes with Taiwanese tribes. In Hualien, this led to an event known as the Takobowan Incident, in which the rebelling Kavalan were almost entirely wiped out. A small number of tribespeople were able to escape, going into hiding among the neighboring Amis. For over a century the Kavalan were left adrift in the currents of history, until in 2012 they were finally formally recognized by the ROC government, becoming the 11th tribe to receive such recognition.

Unfortunately, while they had finally had their rightful name returned to them, they soon found that their collective memory had long since vanished. And so the people of Paterungan set up the Hualien Kavalan Development Association and began digging through historical literature in hopes of finding some traces of their lost culture. They found one such trace in the form of banana weaving.

To rebuild this near-lost craft, the members of the association traveled tribe to tribe until they finally found three elders who knew it and could pass it down: Zhu Abi, Pan Ayu, and 81-year-old shaman Pan Wuji (Ipay, 潘烏吉). Taking the younger artists by the hand, these elders passed on a craft they had learned as children, finally helping it come into a new era.

Inside the workshop, the local tina (mothers) gently coil up the natural fiber, reminiscent of hemp or rattan, and weave it into a fine fabric or useful objects. Watching the fiber as it goes from soft to tough, it is hard to imagine that it finds its origins in something as ordinary as locally grown bananas.

Project manager Pan Jingying says that many people mistakenly believe that the banana weaving process is similar to ramie weaving, but in fact, it is something unique to indigenous Taiwan. Furthermore, preparing the banana fiber is an unimaginably cumbersome process. "From start to finish — from planting through cutting, scraping, and drying, to winding, warping, and weaving — it can easily take a good three months!"

Between April and September each year is the best time for the Kavalan people to make banana fiber. They harvest banana leaf sheaths that have not yet blossomed, then layer by layer strip them for fiber. Finally, that fiber is woven together, with different thickness of fiber used for different purposes.

Only a material as small but strong as banana fiber could weather the ravages of time as it does, and it is that strength that has helped it tie the tribe's past and its present so tightly.

Traditionally, banana fiber has a wide range of uses and can be made into items like sacks, robes, hats, and bags. The workshop is working to further integrate natural dyes from Chinese indigo, areca seeds, and fukugi trees. These dyes give the banana fibers a range of colors, resulting in woven patterns with more variety. The resulting product is then used to make a range of modern goods, including fabrics, camera straps, bags, coin purses, business card holders, bookmarks, book covers, and cell phone covers.

Through mentorship, study programs, and exhibitions, the workshop has now trained 12 craftspeople and built partnerships with several local families, using otherwise fallow land to grow over a thousand banana trees. Thanks to the concerted efforts of the village residents, banana-fiber weaving has not only been successfully revived, but has also evolved into a variety of beautiful new forms to become a marvelous product that bridges centuries of Taiwan history.