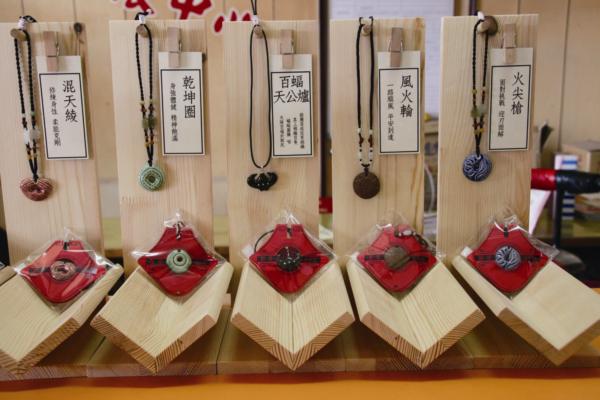 The Taizigong Temple in Tainan's Xinying District is Taiwan's oldest such temple and the base from which worship of the folk deity Nezha, nicknamed the "third prince," spread through Taiwan. It is also a registered historic site, as well as the core of the community's faith. Each year, when Nezha's birthday comes around, pilgrims from across Taiwan make their way to the Taizigong Temple to celebrate and burn incense in tribute. Artist Chou Mei-chi (周美智) grew up in a community named after the temple, and her affection for its history, culture, and people runs deep.

"We might not have any special industries in Taizigong, but we have the temple, which is the most important thing here. And so when I was working on coming up with ideas, I had to talk things over with my friends to think beyond the usual deity figurines or holy artifacts and the like that temples generally offer," said Chou of her efforts to come up with creative items related to the community.

"In the course of just chatting with my friends, I'd occasionally come up with some new ideas, and this time they were joking that we've always got incense ash, so why not use that?" And so the Pan Ceramic Studio founder started thinking over ways to incorporate incense ash into her ceramic work.

Incense ash is traditionally reputed to have curative and exorcising effects, and so when people move to a new home or go on long journeys, the elders of the family will burn some incense and give them the ash to take with them. As a result, such products are not only religiously significant, but also important symbols of home and of folk culture. That meant that making ceramics with such ash made them not just ceramic art, but something with more profound cultural and lifestyle ties.

Of particular note is that rather than adding ash to the glaze, Chou chooses to mix it into the clay itself. "Clay, to me, is much more the essence of a thing, while the glaze is just a superficial addition," she stated. Adding the ash doesn't have a huge effect on the clay, mostly just changing the color a bit and lowering the melting point. Both of those effects are also related to how much ash is added.

"When praying to the Third Prince, we use the incense ash to cement this positive connection, and so through these ceramics, we can then pass on our faith and care to others we have ties to," she explained, adding that only a symbolic amount is mixed with the clay.

Pan Ceramic Studio now works with pottery students at the local cultural center to find symbols and designs most fitting for the community's faith. Poring over historical research and conducting fieldwork, they are able to sketch out and photograph things that inspire them, giving rise to unique works that represent the region's distinctive culture. The final products are then displayed and sold by the Taizigong Temple.

Given the incredible number of pilgrims and tourists that visit the region every year, this is a great business opportunity for the historic temple. It is also only the beginning of efforts to promote the culture of this community through the cultural sector and distinctive local handicrafts.