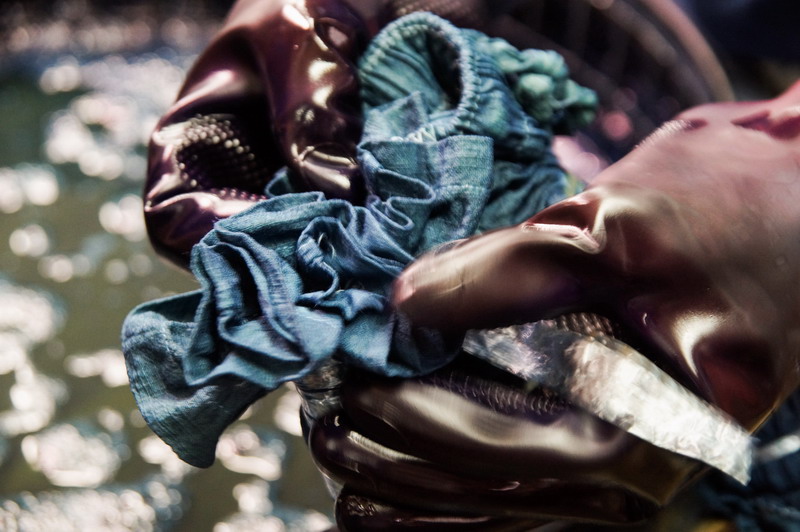 "Most people don't know that what we call 'Sanxia Old Street' now used to be called 'Dyed Fabrics Street'," says Liu Meiling (劉美鈴), secretary-general of the Sanchiaoyung Cultural Association. In the past, Sanxia was a producer of a flowering plant of the Strobilanthes formosanus variety, which was used to produce a bright indigo dye; this, combined with rich riverine resources, made it an excellent place for dyeing and washing swaths of fabric.

The products were then shipped along Sanxia River to Danshui River, packed at a port in what is now Wanhua District, and shipped out to Xiamen and Shanghai in China. Unfortunately, when chemical dyes were introduced to Taiwan and quickly replaced natural materials, Sanxia's indigo dye industry soon fell by the wayside.

The Sanchiaoyung Cultural Association started life as a simple non-profit organization made up of residents and teachers who loved the community, and their efforts were largely focused on studying local history. Then teacher Ma Fenmei (馬芬妹) happened upon the tales of Sanxia's indigo dyeing, and the association began working on promoting local handicrafts. They established the Sanxia Dyeing Workshop, began training a few "seed teachers," and then invested considerable resources into developing indigo dyes and related products, slowly resurrecting a craft that had been lost for some eighty years.

In 2002, the association began working with the Taipei County Bureau of Cultural Affairs on organizing the inaugural Sanxia Dyeing Festival. This not only offered a showcase for the results of their hard work, but also helped rebuild Sanxia's reputation for dyeing. The festival brought the association together with renewed vigor and ignited an even stronger determination to continue along this path.

Through the annual festival, the Sanxia Dyeing Workshop has gone on to work with the Graduate School of Textiles & Clothing at Fu Jen Catholic University and renowned fashion designer Sophie Hong (洪麗芬). People began exploring northern Taiwan for other traces of its indigo dyeing history, and even traveling to Japan on exchange to learn dyeing methods. Slowly but surely, this traditional art is growing new roots in the modern age.

Through stenciling, waxing, and other dyeing techniques, this revitalized industry has begun producing ever more detailed and diverse patterns, including brilliant scenes of starry skies, soaring mountains, and brilliant lakes.

Today, the workshop has already trained some two dozen seed teachers, and now they are investing in the cultivation of the plant-based dye to create a more thorough and robust supply chain. Looking to the future, the workshop hopes to develop more international contacts and hold exchanges with like-minded groups to soak up new inspiration for Sanxia's unique brand of indigo dyeing.