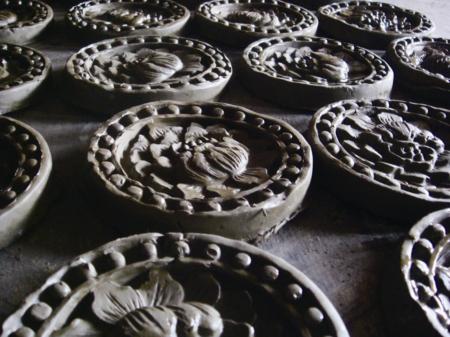 With the kilns of southern Taiwan having gradually fallen by the wayside as time marches forward, today Kaohsiung's San-he Tile Kiln is the only one remaining in this region, the chimneys of its "turtle kilns" continuing to puff away. The fires of these historic kilns have stayed burning for over 80 years under the watchful eyes of three generations of their owners, the Li family.

In a past life, they were run by Hsu An-ran (許安然) of Pingtung, who established the Shun-an Tile and Brick Factory in 1918. A decade later, Li Yi (李意) bought the kilns from Hsu in 1928, with his fourth son Li Yu-chu (李玉柱) taking the reins in 1975 and renaming the complex "San-he Tile Kiln." After Li Yu-chu's nephew Li Yi-hsiong (李義雄) passed away, the elder Li continued to treat the younger's widow as family, ultimately passing the baton to Li Chun-hong (李俊宏), the second son of his nephew and Huang Hsiu-lan (黃秀蘭), the widowed niece-in-law he had continued to host in the family home. Since then, the youngest Li has continued to keep the family business going strong.

Li Chun-hong previously worked in banking, but seeing his increasingly elderly uncle and mother slaving away at the kilns, he determinedly threw away an enviably well-paying job to relieve their burden. Having grown up around the earthy scent of the kilns, Li was confident that with hard work, he would be able to make a comfortable career as he headed down this new path.

Kiln-fired tile-making was introduced to Taiwan over three centuries ago, with the so-called "turtle kilns" soon earning that name for their domed, turtle-shell-like shape. San-he Tile Kiln is made up of three such brick-built kilns. The three are used in rotation, optimizing the use of heat energy and time. Each kiln takes a month and a half to fire up and is in use for a total of five months, including production and cooldown, in order to meet today's productivity needs.

By the time Li Chun-hong took over the kilns, however, they were already part of an industry well into its twilight years. He has since introduced modern mechanical elements, including mixing machines and automated molding, which have greatly improved efficiency and quality, but keeping the business alive has still been hard going. Even with the improvements, the three kilns, each about 5m wide, 60m long, and 5m tall and occupying a total of about 4,630m2, can produce just about 300,000 traditional tiles per firing.

The kilns are actively firing tiles for some two months at a time, and the first 10 to 15 days of this require a small wood fire to be constantly burning for what is known as "bisque firing," the process by which all water is forced out of the freshly made tiles. This process depends greatly on the experience of a "firing master" to keep a close eye on the fire and determine when the firing is completely done. This is then followed by glaze firing, which requires a steady temperature for 24 hours ― if there are any mistakes, then the whole batch may be completely ruined.

Throughout this process, the temperature inside the kiln must be kept at about 1000°C, and glaze firing is conducted day and night for as long as 45 days. Once this is complete, the kiln door must be closed and the kiln left to cool down for a month before it can be used again.

To ensure the necessary skills and knowledge are passed on, San-he Tile Kiln is also actively working to train the next generation of tilemakers. However, as those with the experience get older and ever fewer young people are willing to take up this kind of hot, dirty, and often dull work, this is proving a difficult task for Li. The one bright spot has come in the form of their creative workshops, which have attracted a number of younger participants through their transformation of tradition into art.

No matter how hard things may get, though, Li is committed to keeping the fires burning at these old kilns, full as they are with the care and love of three generations of the Li family and their deep connection to and affection for Taiwan.