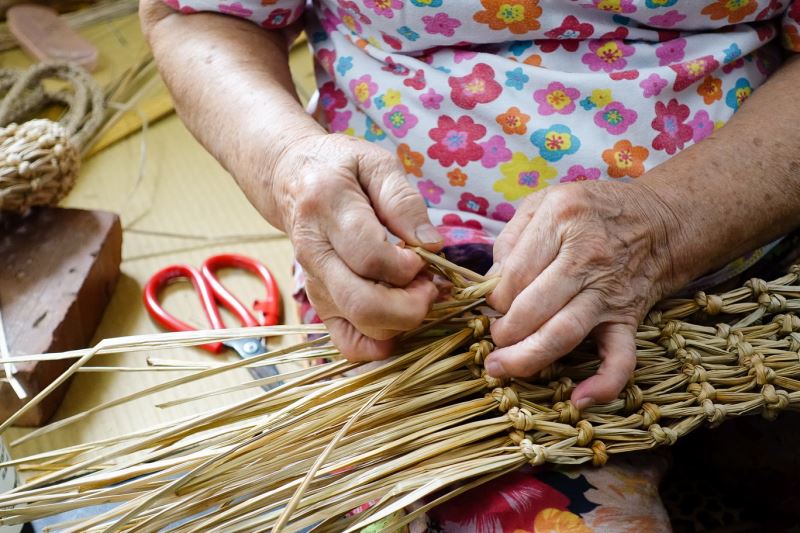 The earliest documentary evidence of Taiwan's rush-weaving culture dates back to 1728. Its earliest proponents were women of indigenous plains tribes, and later, the Han Chinese who came to start farming in Taiwan discovered that this particular variety of bulrush was fragrant and skin-friendly, and it soon became a popular contributor to housewares.

Under Japanese rule, woven rush products became one of Taiwan's five biggest agricultural exports, at a value only beaten by sugar and rice. Yuanli, which came to be known as the home of rush weaving, once boasted dozens of hectares of rush fields, capable of producing some 200 mats a day. And the people that were responsible for the economic miracle this created were none other than the local ladies.

Huang Zengzhen (黃增楨), chair of the Taiwan Yuan-li Handiwork Association, says that according to 1954 figures, the number of people in Yuanli involved in some way with the rush weaving industry was around 12,000, with specialist weavers numbering 2,300. Virtually every woman in every home in the township was part of the craft.

Today, however, the picture is much different. Not only are the weavers getting on in years, the number of young people interested in learning the craft and keeping it alive is vanishingly small. It was in response to this situation that, in 2009, the residents of Shanjiao Community in Yuanli established the Taiwan Yuan-li Handiwork Association.

From their initial three weavers, the association has now completed training of 13 new weavers, and they've begun to attract a growing number of students as they carry on this grassroots effort. To help this traditional craft stay current, the association has turned to cooperative efforts like the "Love Rush Craft Awards (愛藺工藝獎)," which aim to encourage designers to experiment with rush weaving.

For this, Huang says, interested designers must first take part in a workshop, learning about the culture, history, and materials involved, before entering a creative partnership with a weaver. As a result of this project, an ever-growing number of new commercial products are emerging and ushering forth a new era of rush-weaving design that even incorporates other materials.

In 2015, Chen Shao-yen (陳劭彥), a Taiwanese designer who studied in the UK, partnered with weavers Wu Tsai-ching (吳彩卿) and Liu Tsai-yun (劉彩雲) on an attempt to create the first evening wear to make use of rush weaving. The final product would go on to be worn by international movie star Shu Qi (舒淇) at charity event "The Big Shot," catapulting Taiwan’s rush weaving onto the global stage.

In recent years the association has applied to the Ministry of Labor's talent training program, held exhibitions and workshops, and cooperated with Shanjiao Elementary School (山腳國小) in an effort to introduce the craft to children through group activities. This latter effort also saw Shanjiao Elementary School honored with the Excellence in Education Golden Stone Award from the Ministry of Education, in addition to helping pass this traditional craft on to a new generation.