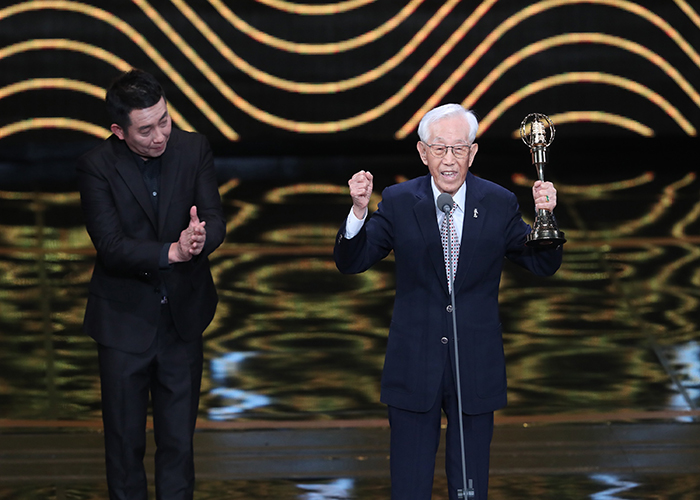 Chinese Name: 高振鵬
Date of Birth: July 21, 1929
Date of Death: July 05, 2021
Place of Birth: Huzhou, Zhejiang, China
Did You Know?
Kao Cheng-peng started his acting career at the age of 22 and went on to become a veteran figure known as "Papa Kao." He also spent 10 years as a stylist and make-up artist, 11 years as a voice actor, and 17 years as an assistant film director during the boom time of the film industry. He performed in a number of film and television works, receiving the Golden Bell Award for Special Contribution in 2018 for his highly acclaimed acting skills. Although he never once played a leading role, he was one of the few actors who was still active even at an advanced age.

Kao Cheng-peng was born in 1929 in Huzhou, Zhejiang Province, China. He was the youngest in his family, and his father was a former Qing dynasty imperial scholar. Since his mother birthed him at an advanced age, she doted on him particularly strongly. In 1949, while a student at Great China University, Kao went to a screening of the film "Port of Hualien" with some friends, after which he decided to spend a month traveling Taiwan. What he could never have foreseen was that, that month would turn to decades as he was unable to return home due to the impact of the Chinese Civil War. As a result, he found himself cut off from his family for almost 40 years, finally returning home with his daughter in 1988, only to find that his father, mother, and elder brother had died during the Cultural Revolution, meaning his only remaining family were his two elder sisters.

Kao Cheng-peng's career as an actor began in 1951 when he joined the Army Art and Labor Corps and became a member of the Army Armored Corps Command Drama Team and the Army General Headquarters Luguang Drama Team. After making his breakout debut in the drama "Gongxi Facai," two years later, he took on a role in the first film by the Agricultural Education Motion Picture Company (which would go on to become the Central Motion Picture Corporation).

During this time, he also performed or worked behind the scenes of the political propaganda films "Awakening from a Nightmare," "The Girl Who Picked Watermelon," and "Songfest." After that, he worked as a make-up artist in the Central Motion Picture Corporation and taught make-up and character modeling in the film department of Shih Hsin University for five years.

In 1963, he won the Best Actor Award in the Drama Competition of the National Army Literary Arts Competition for his role as Qian Datong in the drama "Majiasai." While in the military, he performed in military educational films produced by Central Motion Picture Corporation and also regularly appeared in television programs produced by the ROC Ministry of National Defense.

In 1974, he became well-known to Taiwanese audiences when he played the role of Chief Superintendent Jin in the CTS drama "Bodyguard." Then in 1975, he acted in the TV series "Cold Wave," and in the same year, he played a part in the 400-episode long CTV series "Kinship," after which he was signed to CTV. During his tenure at CTV, he was nominated for the Golden Bell Awards for the second time for the drama "Moving Shadows."

In the past, when there were only three channels, Kao was one of only 10 people to receive the "Actor's Honor Card" and the Model Worker Award, demonstrating his seriousness and dedication to his work.

In 2002, he began to appear in TV dramas for Da'ai TV, such as the musical sign language drama "Sutra of Filial Piety," and participated in the Tzu Chi Foundation's charitable sign language drama tour. That same year, he won the Golden Bell Award for Supporting Actor in a Television Movie for his performance in the Da'ai film "Human Fraternity."

In a speech at Shih Hsin University in 2013, Kao said that good health, good resilience, dedication to work, respect for the industry, the ability to adapt, and a passion for acting are the ingredients necessary to be a good actor.

Kao Cheng-peng has appeared in countless film and television works, from the classics "Justice Pao" and "Empress of the Dynasty" to idol dramas like "It Started with a Kiss," "Attention, Love!," and "The Magician on the Skywalk," earning himself a reputation as "the grandfather of Taiwanese people."

In addition to his life in acting, however, there was a second path that Kao Cheng-peng took. He was involved in civil and charitable activities for many years, including serving as an officer of the performing arts union for a number of years, holding the positions of supervisor, director general, and chief secretary. He was also certified as a member of Tzu Chi Foundation in 2010. He once said, "I will always be a dedicated actor, while at the same time, on this path of charity with Tzu Chi, I will uphold the promise that ‘wherever I am needed, I will go.' This is something I will do until my final days."

On July 5, 2021, Kao Cheng-peng passed away peacefully in his sleep at the age of 91, drawing the curtain on his seven-decade acting career and a long, vigorous professional life.