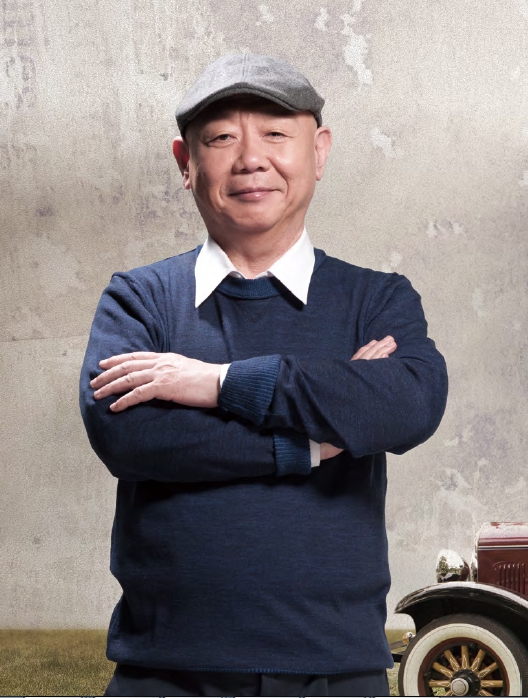 Chinese Name: 顧寶明
Date of Birth: April 08, 1950
Date of Death: March 19, 2022
Did You Know?
Famous actor on Taiwanese stage and screen Ku Pao-ming was involved in television and theatre performances over several years, earning tremendous recognition for his acting skills, including winning two Golden Bell Awards and one Golden Horse Award. His superb showmanship brought endless laughter to his audiences and earned him the title of "comedy master."

Growing up, Ku Pao-ming was a student at three fisheries high schools, one in Su'ao, one in Keelung, and one in Donggang. He had originally planned to become a crew member on a ship, but after completing his military service, he instead joined a Teachers' Drama Club, making his first steps into the theater world. He went on to be trained in an actors training class at CTS and made his debut in 1976 with a stage performance. In the early days, he teamed up with Lee Li-chun (李立群), Hugh Lee (李國修), Lu Yi-lung (路一龍), and others, to take part in skits for CTS' variety show "Variety 100." This experience laid the foundation for his future acting capabilities.

Ku was a practiced actor who could change up his performance as needed, enabling him to be equally at home on the big screen, the small screen, and the stage. His stage performances included "Art" and "The Apartment (公寓春光)" with Godot Theatre Company; "Secret Love in Peach Blossom Land (暗戀桃花源)” with Performance Workshop; "Legitimate Crimes (合法犯罪)" and "The Half Mile of the Great Wall (半里長城)” with Ping-Fong Acting Troupe; and "In This Life (今生今世)” and "The New Match with Hezhu (荷珠新配)” with Lanlin Theatre Troupe. His screen performances, meanwhile, included dozens of films such as "The Personals (徵婚啟事)," "The Warlords (投名狀),” and "The Village of No Return (健忘村)," as well as a number of television shows like "Buddha's Palm (如來神掌)," "Romantic Princess (公主小妹)," "Princess Huai Yu (懷玉格格)," "The Four Brothers of Peking (京城四少)," and "The Misty Rain of Jiangnan (煙雨江南)."

In 2007, he played a part in the Chinese movie "The Warlords," playing the scheming Lord Di, superbly presenting the intrigue that played out between high-ranking officials and ministers in a performance that is remembered to this day. In addition, that same year, he played the grandfather in the TV series "Romantic Princess," and in 2016, he played Grandpa Tomozo in the Taiwanese live-action adaptation of the Japanese anime “Chibi Maruko-chan (櫻桃小丸子),” coming to be known as “the nation’s grandpa.” In 2017, he starred in famous director Chen Yu-hsun's film "The Village of No Return," and in 2020, he made a cameo appearance in “My Missing Valentine (消失的情人節),” a performance that would be his last. Chen described Ku as the best comedian he had seen, with unparalleled comedic capabilities.

Ku Pao-ming not only loved acting as a job, but he also had tremendous respect for the industry, once remarking that "a dream is a dream. Making a dream reality is a thousand times more difficult than living up to an ideal. My dream, which I have always stuck with, is to become a better actor, and I hope that no matter how old I get or what physical condition I may be in, I will always be able to do the job to the absolute best of my ability." James Liang, the founder of Godot Theatre Company, called him a "serious comedian," because Ku always held his performances to an extremely high standard, and when he played a comedy role, his prudence and attentiveness always ensured he could bring out the best in the role, reaching new heights and sending the audience into fits of laughter.

Throughout his career, Ku Pao-ming was in the running for several awards, including nominations for the Golden Bell Award for Best Actor in a Drama for "Clear Sky Turbulence," Best Supporting Actor at the Golden Horse Award for “My Rice Noodle Shop (花橋榮記)," and for Best Supporting Actor at the Golden Horse Awards for "Wolves Cry Under the Moon (國道封閉)." In 1982, he won the Best Actor Award at the 17th Golden Bell Awards for the CTS drama "He's My Brother (他是我兄弟)," while his most iconic performance, in the classic stage play "Secret Love in Peach Blossom Land," premiered in 1986. In the movie version of the latter, he played Boss Yuan and won the Best Supporting Actor Award at the 29th Golden Horse Awards. In 2006, Ku won Best Actor in a Mini-series/Television Film at the 41st Golden Bell Awards for his role in "Ammunition and Knives (砲彈與菜刀)."

In 2018, having been diagnosed with autonomic dysfunction, Ku began to scale back his performances, gradually stepping out of the spotlight. On March 19, 2022, Ku Pao-ming passed away from cardiopulmonary failure. Minister of Culture Lee Yung-te expressed his condolences at the passing of Ku, noting that Ku had shown an impressive passion for acting throughout his life across television, cinema, and stage, and had racked up an impressive number of achievements and awards for his efforts. The many spectacular performances of Ku Pao-ming will surely ensure that his memory lives on with audiences for many years to come.