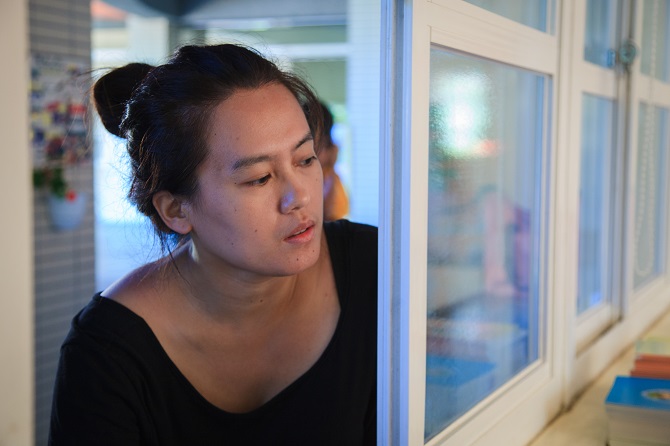 Laha Mebow (otherwise known by her Chinese name Chen Chieh-yao) is Taiwan's first female aboriginal film director. She has been working in film and television for almost 18 years, and her portfolio of short documentaries and dramas focuses on indigenous themes and culture.

Laha is Atayal, and was raised near Taichung. Laha graduated from Shih Hsin University's Department of Radio, TV, and Film, after which she joined Taiwan Indigenous Television, where she learned more about her aboriginal heritage. Having trained in both scriptwriting and directing, she is also a television producer, and has worked with the internationally famous Tsai Ming-liang, director of "Vive L'Amour" and "Stray Dogs." Her contributions to these issues earned her a Top 10 Outstanding Young Women Award from the Taiwan government in 2015.

In 2016, she was an artist-in-residence at Cité Internationale des Artes in Paris thanks to a recommendation from Taiwan's Ministry of Culture. Recently, she has focused more on Taiwan's Austronesian links, with plans for making international dramas in the future.

Laha’s first feature-length film was 2011's "Seeking Sayun," about the lives of aboriginal people under Japanese colonization. She filmed it in her home village of Tyohemg, in Yilan County, mostly using non-professional actors. It is partly a reply to the 1943 Japanese propaganda movie "Sayon's Bell," made to present Taiwan's indigenous tribes as loyal subjects of the Emperor.

"Sayon's Bell" is about an aboriginal girl from Nan'ao, where Laha was born, who drowns while carrying a suitcase across a river to her beloved, a Japanese officer. “Finding Sayun” presents various versions of this story, suggesting that the sentimental aspects of the 1943 film were purely fictional. It also critiques popular films' exploitative use of aboriginal subjects by including a plotline about a filmmaker trying to cast a movie despite the villagers' indifference.

Laha's latest film is "Hang In There, Kids!" (Atayal title "Lokah Laqi!"), released in 2016. It is the story of three Sqoyaw children growing up in the mountains. Despite the children's energetic and optimistic outlook, their families have issues. Their teacher, who opens an after school club to help them with their homework, has a beautiful voice, but never sings. One day, the children find a tape of her singing and decide to take it to Taipei and sort out a career as a singer for her.

It has been described as both "heart-warming documentary realism" and "a brutally honest look at the economic realities of young people's lives in indigenous villages." It has also been acclaimed for its depiction of the landscape and its emotional impact.

"Hang In There, Kids!" won five prizes at the 2016 Taiwan Film Festival, including Grand Prize and Best Director, and was Taiwan's entry for Best Foreign Language Film at the 2017 Academy Awards. It has since been released around the world, including a special screening at the 2016 San Diego Asian Film Festival.

She is now working on a new project called "Ça Fait Si Longtemps," which follows two Taiwanese indigenous musicians on a musical journey across New Caledonia. Laha revealed that she was inspired to take on her first feature-length documentary after witnessing the similar loss of identity and displacement faced by indigenous groups in both Taiwan and New Caledonia.