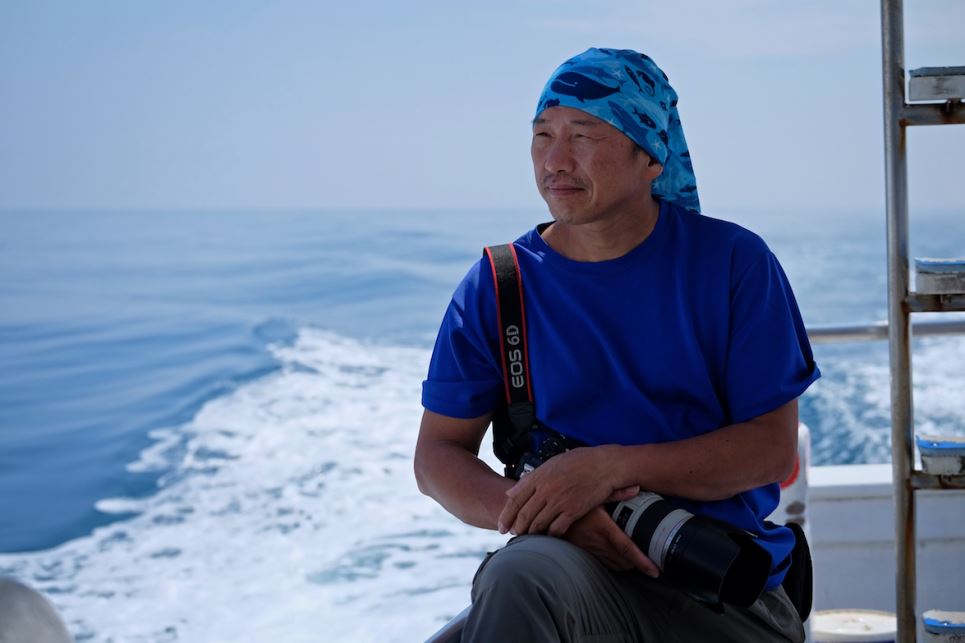 Ke Chin-yuan is a documentary filmmaker. His works concentrate on themes of nature and ecology, discussing how humans affect and are affected by the world we live in. His calling has taken him all around the world, from the trees of Yushan to Antarctic's Vinson Massif and beyond.

Ke was born in 1962, in a coastal village in Shengang District, Changhua County. A little stream that flowed into the Dadu River ran past his house; villagers would use it for irrigation and catch fish in it. Nearby was a famous wetland area. Living in a relatively isolated region was a formative experience for Ke. He later said that it made it easy to decide on an unconventional career, even amongst other students who were interested in journalism.

By 1980, however, the stream that ran past his house had changed. It was full of pollution from heavy industry, and the water at the mouth of the Dadu River was black. This inspired Ke to begin his documentary career. He quit news and commercial photography and became a reporter, hoping to share news and voices from the land. This was difficult at first, as he had previously tried to make beautiful photographs, which would no longer be possible. Instead, he held a photo exhibition to bid adieu to that aspect of his work.

Ke made his first film in 1980. He joined the News Department of Taiwan Public Television Service (PTS) to work on "Our Island," an environmental news program. There, he began making series about coastal erosion, forest conservation, and environmental hazards. Recording Taiwan's environment made it easy for him to notice small changes and the disasters they led to. Ke still works for PTS, where he is the head of documentaries.

So far, Ke has made a remarkable 18 documentaries and over 600 feature reports and program episodes. Ke's films have won over twenty awards in different countries. These range from the 2011 International Kavalan Short Film Festival in Yilan County and the Taipei Film Festival, to Naturvision, a German environmental film festival.

Ke's films include "Swing," about the fad for keeping pet orangutans in the 1990s, but it also describes what happened to the apes when the craze had run its course. This took him ten years to make. Meanwhile, he spent seven years filming "The Squid Daddy’s Labor Room," about a conservationist constructing a breeding ground for oval squid off Taiwan's northeastern coast.

Between 2008 and 2011, Ke filmed "Ebb and Flow" in places around Taiwan. The project began when the Taiwan government announced that it approved plans for moving the Kuokuang petrochemical plant from Yunlin District to Fangyuan Municipality in Changhua. Ke went to the site to film, capturing the beauty of the wetlands and delighting people when they realised that they could still find such vivacious wetlands in Taiwan. He also recorded how local fishermen earn money to support their families by gathering oysters in the intertidal zone.

Ironically, as Ke finished filming, Kuokuang announced that it had cancelled its plans to move the plant away from the wetlands.

Ke's work has taken him further afield since. Between 2007 and 2009, he travelled not only to Antarctica and the Arctic but also scaled Mount Everest. His mission was to film glaciers retreating, and investigate issues surrounding climate change. This was not his idea alone; the World Meteorological Organization had designated 2007-8 International Polar Year. Over 50,000 scientists were involved in research related to climate change.

However, Ke was also filming a group of mountaineers aiming to climb the highest peak on each of the seven continents. The "Dream Trilogy" shows their struggles to achieve their goal. Despite the stress the climbers had to deal with, Ke noted that the biggest challenge he faced was not human psychology. It was, much more simply, the unpredictable weather.

Ke’s mission to awaken people to environmental issues continues on. His latest release, "The Age of Awakening," is a compilation of over 30 years of documentary footage and interviews from major environmental movements taking place in Taiwan from the 1980s to 2018.