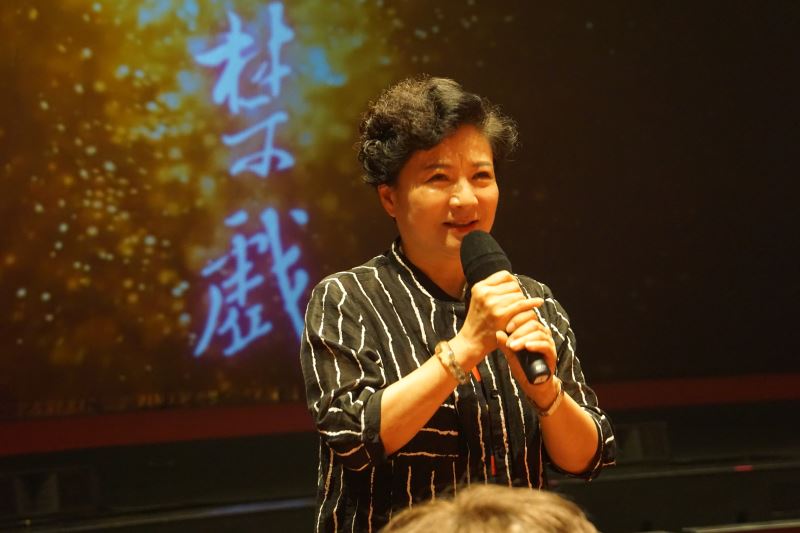 Wang An-chi has played a number of roles, including scholar, educator, theater critic, and playwright. She is a recipient of the National Awards of Art and the Golden Melody Award for Best Lyrics, among many others. Her deep roots in classic literature have helped her grasp the essence of traditional operatic art and how that essence is reflected in contemporary thought, gaining profound insight on how traditional Taiwanese operatic art has evolved in the modern era.

Her mother, a theater fan, would listen to Peking opera programs on the radio every day, and so Wang began her musical education while still in her mother's womb. Over the years, she attended theatrical performances after school on a regular basis at Tri-Service Childcare, Jieshou Hall, and Red House, as well as the regular Peking opera shows at the Armed Forces Culture Center.

In 1985, on the day she received her doctorate in Chinese literature from National Taiwan University, fate would have it that she would begin the transition from audience member to creator. The director of Ya-Yin Ensemble (雅音小集), Kuo Shiao-chuang (郭小莊), was hurriedly working with writer Yang Hsiang-shih (楊向時), who had suddenly fallen seriously ill. Unable to complete the script for "Liu Lanzhi and Jiao Zhongqing (劉蘭芝與焦仲卿)," he sought Wang’s help, marking the start of a two-decade career in Peking opera writing.

Since 2002, Wang has served as artistic director for the GuoGuang Opera Company (國光劇團), whose performances of her works have been honored at the Taishin Art Awards numerous times. Based on the principle of modern literary development, the company produces updated versions of old shows as well as creating all-new ones, molding new Taiwanese aesthetics for Peking and Kun operas around feminist themes.

Faced with a younger generation of students, Wang hopes that the beauty and emotional essence of Peking opera can be passed on to them, and this has driven her to modernize the themes and philosophies inherent to the form. Without Wang the opera fan, Peking opera may have been just down an enthusiastic audience member, but without Wang the writer and scholar, Taiwan's traditional theater scene would have lost a tenacious advocate who has penned a new page in the history of her beloved art.