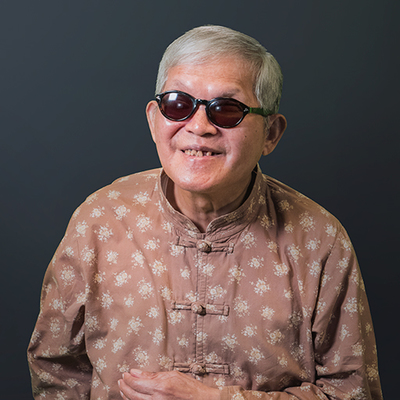 Hsu Mu-chen was born in 1944 in Xionglin Township, Hsinchu County. In his early teens, he began to learn Hakka mountain songs, singing them as he traveled with his cousins. At 20, he became the student of Zhudong's Huang Rong-chuan (黃榮泉), learning to play the huqin and sing in the wide array of Hakka styles. Ten years later, he began studying under Xinwu's Fan Chiang Hsin-hsi (范姜新熹), learning suona and dizi, as well as performing Hakka bayin music with him.

In addition to all this, Hsu learned physiognomy from a fortune-teller at the age of 16, later setting up shop in the same line of work at Xinpu's Yimin Temple. While he was ostensibly a professional fortune teller and only an amateur singer, his outstanding singing voice and strong improvisational skills soon earned him a different reputation.

Hsu's particular specialty is the pingban mountain song (平板山歌), which he sings with a rich, sonorous voice. He may lack a visual sense, but he has an impressive sense for music. One thing he has been especially praised for is his improvisational performance skill. Traveling around as a young man, he got plenty of practice making things up on the spot, and coupled with his quick wit, his understanding of the mountain song genre has enabled him to ensure his improvisations fit the form perfectly, earning him the nickname of "emperor of Hakka mountain songs."

Hsu has taken part in a number of mountain song competitions to excellent results. In the 1970s, he performed with the Zhudong Reservists Hakka Folk Music Troupe (竹東後備軍人客家民謠隊), and in the mid-1990s, he was invited to perform around Taiwan and the United States. This culminated in 1998 with his being honored at the 6th Global Chinese Culture & Arts Awards. He is also often invited to perform at cultural festivals and for visiting foreign dignitaries.

With his voice so well received among the Hakka communities of Taiwan, Hsu has recorded over 100 albums of Hakka folk music for multiple labels and in multiple traditional styles, from mountain song to comic theater, and even a few Hakka bayin performances.