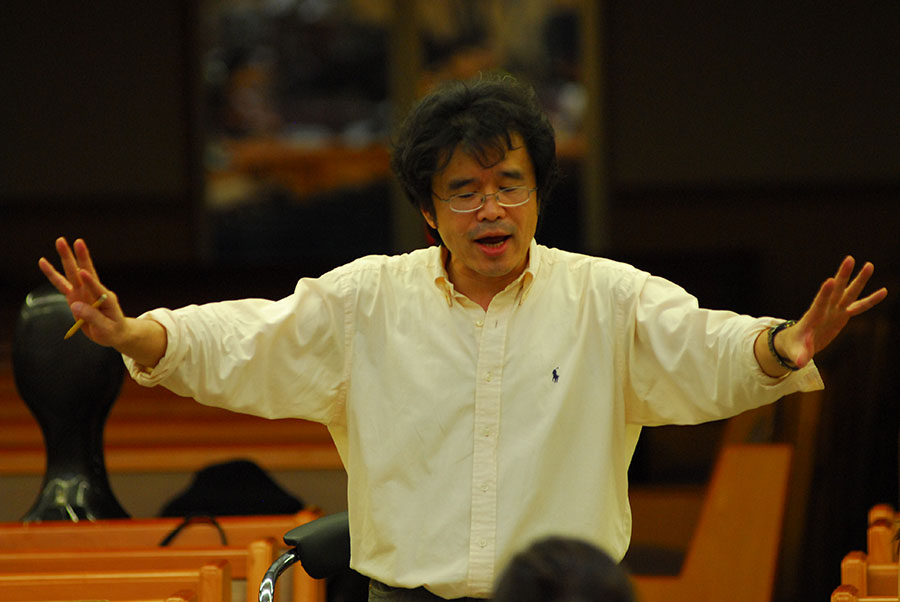 
Gordon Shi-Wen Chin, conductor, composer, and musicologist, grew up in an environment that learning music seems to be the most natural thing to him. The son of a high school music teacher, Chin began learning piano from his father at age five. When he was about ten years old, he travelled constantly from family home in Yunlin to Tainan, to take piano lessons from Chen Meiman, a graduate of the Juilliard School in New York City.

At 13, he and his family moved to Japan, where he continued to learn piano, and his love of music was as strong as ever. After graduating from high school, he set out for the United States, studying at California's Biola University. Having set his sights on a life in music, he later went on to complete a doctoral degree at the Eastman School of Music, University of Rochester, in Rochester, NY.

Upon completing his studies in 1988, Chin returned to Taiwan and started working as both a college professor and conductor of the Yinqi Symphony Orchestra & Chorus. Later, he became the orchestra's intendant, and, at the same time, he served as conductor for Euodia Orchestra in Tokyo.

Over the last 20-plus years, he became the composer with the largest number of commissioned works for groups at home and abroad among Taiwanese composers, and, his music compositions have been performed in Taiwan, as well as the United States, Canada, Japan, France, Germany, and the Netherlands. His published audio works range from solos to choruses, chamber music, symphonies, and operas. During this period, he has given more than 300 concerts, sometimes as conductor of the orchestra. While his works span a variety of forms, they are never obtuse or hard to grasp. On the contrary, he deftly paints in romantic colors with modernist techniques, an approach that has imbued his works with the artistic essence to communicate.

In his creations, Chin is constantly questioning the meaning of life. A practicing Christian, Chin quite naturally reveals his religious temperament in his works. His approachable, soothing poetic style has been well received and widely disseminated. In recent years, his choral and orchestral pieces, like "Golden Beam on the Horizon of Formosa," and "Fragrant Dusk," have been adapted and selected as materials for junior high music textbooks.

In November 27, 2008, "Mackay—The Black Bearded Bible Man," a piece that he had invested some seven or eight years and considerable energy into planning, composing, and revising, was eventually premiered. This was his first operatic work. With the support of the National Theater and Concert Hall, the three-act opera sung in Taiwanese and English was presented by the conductor Chien Wen-pin led National Symphony Orchestra and performers from Europe, America, and Asia. German opera director Lukas Hemleb was invited to direct.

"Mackay—The Black Bearded Bible Man" depicted the legendary life of Canadian missionary George Leslie Mackay (1844 – 1901). In a press interview in December 2008, Chin said: "When I thought about composing my first opera, Mackay's story came to mind immediately." "I was moved that he came to Taiwan with the question, 'What can I do for the island and people here?' This is the spirit that I'd like to remind the public of," he added.

As in Mackay's desire to find a place where few had spread the word of God before, Chin similarly sought the path less travelled by composing the first Western opera sung in Holo-Taiwanese. Chin's attempt to find a way to create music that matched the complex tonal system of Holo-Taiwanese was without any precedents.

"Choosing Holo-Taiwanese as the opera's main language came naturally, since it's what Mackay learned in order to communicate with local people," Chin said.

Chin believes that it is the duty of an artist to reflect social issues. Reviewing the circumstances of Taiwanese society, Chin considers that the humanities have been extremely marginalized, as people's interest-oriented thinking, shaped by business culture, is distorted. It is essential that literature, art, and theology be employed to correct this disorientation, he stresses.

Referring to his operatic work, Chin points out, the story of a foreigner who left his homeland to dedicate 30 years of his life to Taiwan would be an ideal symbol of what it means to love Taiwan. On top of that, opera seems the better medium than more abstract instrumental music for interpreting Mackay’s dramatic life and communicating with the audience.

In a press interview in Seattle in 2004, Chin said that music has enriched his life and given him a broader grasp of life. He wished to be a composer for Taiwanese and as a Taiwanese composer, he felt the need to go back to Taiwan to experience it, grow there, and live there; to feel the pulse of Taiwan and to seek out ways to get Taiwanese music known.