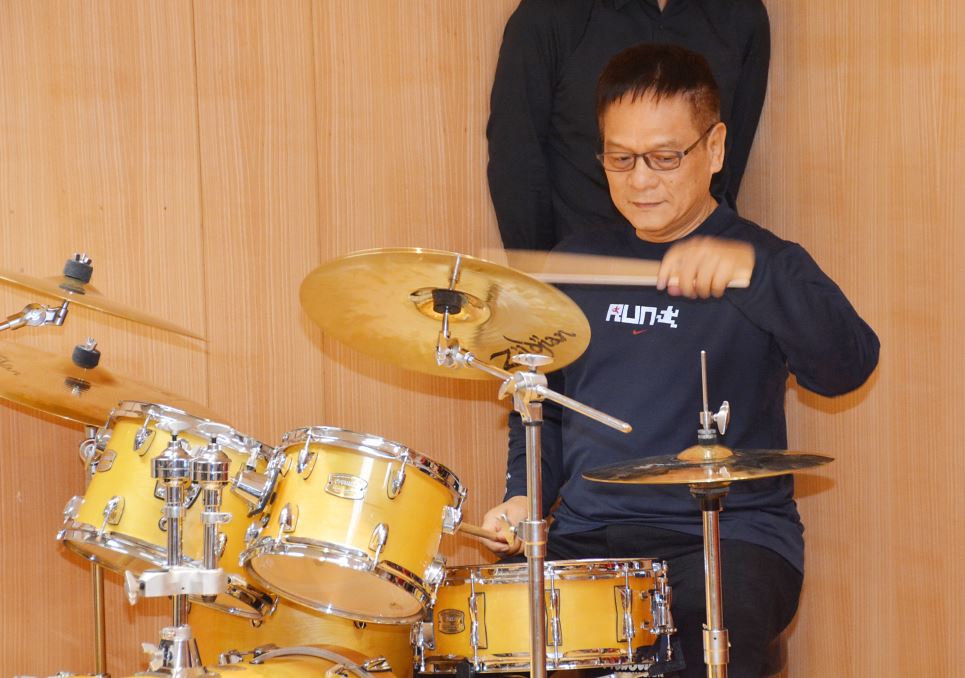 Name: 黃瑞豐
Date of Birth: January 6, 1950
Place of Birth: Kaohsiung City, Taiwan
Did You Know...?
Jazz drummer Rich Huang has recorded, as part of an ensemble and individually, some 100,000 tracks in the past five decades, at an average of 2,000 tracks a year. This is equivalent to recording almost six tracks a day, every single day for 50 years straight.

Rich Huang has been a lover of music since his early age. He started learning to play guitar at the age of eight and when he was 14, he apprenticed at a music studio, where first learned about jazz drumming. During the apprenticeship, he also learned how to play electric bass, piano, and electronic keyboard.

Huang started his career as a jazz drummer in 1967, working at the Sea Palace Hotel in Magong city on Penghu island. Since then, he has participated in recording countless pop albums, and performed as a dominate figure or part of ensemble at music festivals in cities across Taiwan. He was also frequently invited to work with large orchestras and put up performances at the National Concert Hall in Taipei, which has won him recognition as a leading jazz drummer in Taiwan.

In 1976, he became a full-time studio drummer and percussionist, organizing the accompaniment for numerous music albums. With the emergence of a new generation of artists who have transformed the rhythm and style of traditional pop and the popularity of pop folk music in the late 1970s, Huang participated in many concerts of popular singers, including Yeh Chi-tien (葉啟田), Julie Sue (蘇芮), Tracy Huang (黃鶯鶯), Lo Ta-yu (羅大佑), and Irene Yeh (葉璦菱). Until today, he remains as one of the go-to drummers in the concert music industry. There is a high threshold for a career as a full-time professional studio musician. Huang has played rock, country, and soul music at US military clubs in Taiwan, as well as Taiwanese enka, Mandarin pop, campus folk, film and TV theme songs, children’s songs, and jazz.

Between 1985 and 1990, he traveled to Japan training courses and and groups of students to attend the Pearl Drums Summer School's jazz drum summer camp for three consecutive years. He was named Taiwan's best drummer by Japanese musical instrument publications and, later, earning the title of "Taiwan's drum king." In 2000, he gave the concert "30 Years of Jazz" at the National Concert Hall in Taipei, a highlight of his performance career.

Since then, he has continued to explore a diverse range of music styles, including pop, classical, jazz, and traditional, and actively engaged in the teaching of jazz drums and promotion of jazz music. Huang considers international exchanges to be particularly important, playing an active role in major government-sponsored jazz festivals, university lecture tours, and international performances with orchestras of both the symphonic and traditional Chinese types.

In 2001, he travelled with the Taipei Philharmonic Orchestra to Swedish capital Stockholm, as a jazz drum soloist for the Taiwan Miracle Concert. Huang earned appraisal by local music critics as "Taiwan Super Drummer," generating even more hype for the concert.

Earlier in 2020, Huang was the recipient of the Special Contribution Award at the 31st Golden Melody Awards. At the awards ceremony, eight drummers from Taiwan's popular groups who have been coached by Huang were invited. Huang and the drummers from the bands Chairman (董事長樂團), 831 (八三夭), Trash, Timeless Fusion Party (無限融合), Buddha Jump (佛跳牆), Mixer (麋先生), AccuseFive (告五人), and Sodagreen (蘇打綠) gave an impressive performance, which featured a solo by Huang. Pointing out that this performance was unprecedented Taiwanese band scene, Huang said he was deeply moved to see so many come together for the Golden Melody Awards.

Decades into his career, Huang remains as committed as ever to the promotion of jazz music, with a special focus on international exchange. He continues to actively participate in major jazz festivals, lecture tours to universities, and regional and international performances.