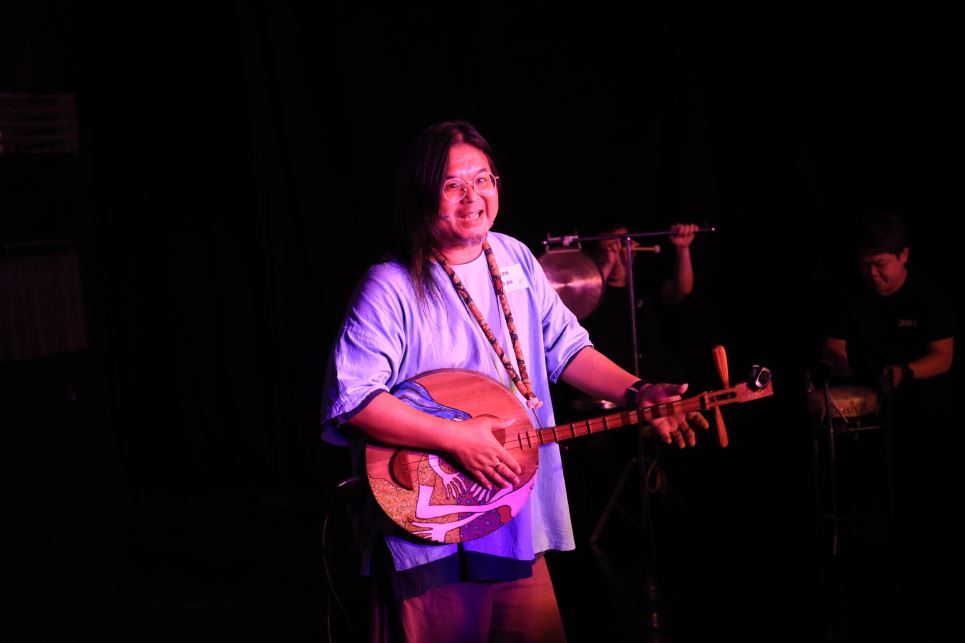 Name: 嚴詠能
Date of Birth: January 23, 1970
Place of Birth: Tainan, Taiwan
Died: Saturday, September 5, 2020
Did You Know…?
Yen Yung-neng (嚴詠能) was nominated twice for the Golden Melody Award for Best Taiwanese Male Singer, once in 2010 and again in 2012. His album "Farming Together" won the Golden Melody Award for Best Taiwanese Album in 2010. Yen took to the stage barefoot to accept the award, stating in his acceptance speech that he created music for the ordinary farming folk of Taiwan and calling on the audience to only eat Taiwan-grown rice, to which all in attendance responded with a vociferous affirmative, creating a memorable moment at the award ceremony.

Yen Yung-neng (嚴詠能) was born in a rural village in Tainan's Xinhua District. In his childhood, Yen was a fan of traditional pò͘-tē-hì (glove puppetry) and koa-á-hì (Taiwanese opera) and had since developed interest in music. He once mentioned that as a small kid, he noticed that his hard-working grandpa would carry a radio with him while heading for work in the field. The music on the radio was like an invigorating tonic to the old man, a source of energy and happiness for him as he toiled in the fields.

Yen was one of five children born to a father who ran a feed business. From early on, he found himself averse to academic study, and his parents didn't expect much from him. In elementary school, he was once punished by a teacher so badly that he lost hearing in his right ear. No one could have expected that he would pursue a career as a musician. Yen himself remained optimistic, once saying, "Well, if my right ear got the heck beaten out of it, I just have to learn to listen to even better things with my left one."

Maybe he was just born with a gift for music. At the age of 22, Yen Yung-neng wrote his first song, which won the fifth place at the College Town Songwriting Competition in 1993. The song, "Don’t Make Fun of Me for Being a Waishengren," was a showcase for how much he identified with his homeland of Taiwan. [Note: "Waishengren" is a term used to refer to those who migrated to Taiwan in the mid-20th-century in the wake of the Chinese Civil War, along with their descendants.]

After graduating from university, he stayed in Kaohsiung, performing on the streets by the Love River and singing in bars. Yen always appeared to be a charismatic and energetic figure, but, in private he found himself down and lost. To hold the audience's attention, he put on a "heavy coat" and constantly shifted his musical style tracing the trend. He confessed that during the time he was singing for others and found no fulfillment for himself.

When he eventually returned to his hometown, he found the view of farmhouses and the traditional courtyard home instead of high risings in the city and the fresh smell of the country instead of fossil fuel exhaust. Amid the paddy fields, the familiar sight of the farmers, and the towering trees, he suddenly realized that what he really cared about was this land. He had rediscovered himself. He knew that the guitar he held was no longer for popular rock or jazz music, and he wanted to sing for the farmers and the land. This was how Yen Yung-neng finally found his path.

In 2010, he won the Golden Melody Award for Best Taiwanese Album with the album "Farming Together." The scene of him walking across the Golden Melody Awards stage barefoot left a deep impression on all those watching. His deep love for the countryside, the Love River, Kaohsiung, and Taiwan never changed even after winning the award, and he continued to lead his band, Takao Run Troupe, giving performances around the 319 villages and towns of Taiwan.

Along the way, he listened to the stories of the land with his heart and gave voice to Taiwan's vital cultural spirit. In the media, he became known as the "traveling poet" and the "walking singer," and he was even invited by the government to perform in the United States and Australia, receiving rave reviews. Despite the attention, awards, and acclaim, his passion for singing for the land and the rural folk of Taiwan in every corner of the nation never wavered.

With gentle voice, Yen Yung-neng sang his protest against nuclear power, advocate for farmers' rights, and care for culture as well as many social issues. He sought to convey his ideologies and messages through songs, not by taking to the streets or crying for revolution. Playing a yueqin (Chinese lute) and singing his folk songs, he seemed to have the magic to recall the love for the land and care for the farm population. He once said, "As long as a song can stay in the listeners' minds for a long time, then I consider it a success."